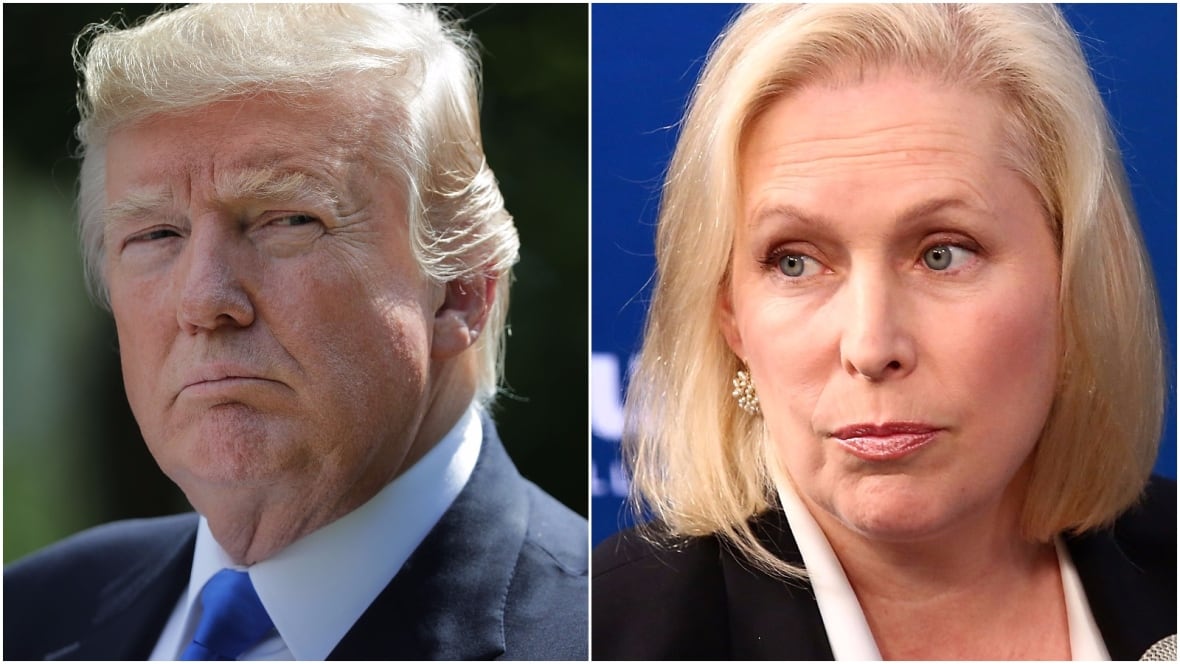 U.S. President Donald Trump, pushing back against women accusing him of sexual misconduct, insisted Tuesday he’s the target of “false accusations and fabricated stories of women who I don’t know and/or have never met.”

Trump lashed out on Twitter a day after three women who previously accused him of sexual harassment shared their stories on NBC’s Megyn Kelly Today.

Trump says Democrats “have been unable to show any collusion with Russia” and now are “moving on” to these allegations. He adds: “FAKE NEWS!”

He also attacked Sen. Kirsten Gillibrand, a New York Democrat who said Monday that Trump should resign because there were credible accusations against him. Barring that, she said, “Congress should investigate the multiple sexual harassment and assault allegations against him.”

Trump tweeted on Tuesday that Gillibrand is a “total flunky for Chuck Schumer,” the Senate Democratic leader. He said Gillibrand, “who would come to my office ‘begging’ for campaign contributions not so long ago (and would do anything for them), is now in the ring fighting against Trump.”

The New York Democrat tweeted: “You cannot silence me or the millions of women who have gotten off the sidelines to speak out about the unfitness and shame you have brought to the Oval Office.”

You cannot silence me or the millions of women who have gotten off the sidelines to speak out about the unfitness and shame you have brought to the Oval Office. https://t.co/UbQZqubXZv

In the wake of accusations of sexual misconduct and harassment directed at powerful men in the media, Hollywood and corporate America, Gillibrand has been among those leading the push for more accountability on Capitol Hill, regardless of party affiliation.

As a result of the climate of heightened awareness, Democratic congressman John Conyers and Senator Al Franken will be leaving office in the wake of allegations of improper conduct toward women, as is Republican congressman Trent Franks.

Republican congressman Blake Farenthold of Texas, who hasn’t stepped down despite a confirmed payout of $ 84,000 US to settle a sexual harassment lawsuit, will be subject to a House of Representatives’ ethics committee hearings.

Several Democrats took Trump to task for the wording and suggestiveness of Tuesday’s tweet.

Rep. Eric Swalwell, a California Democrat, assessed Trump’s tweet about Gillibrand on CNN, saying: “That was an ugly and suggestive tweet, and we all know what he was trying to say there, and it is beneath the office of the presidency.”

Standing up for Gillibrand, frequent Trump foil Sen. Elizabeth Warren, D-Mass., tweeted to the president: “Are you really trying to bully, intimidate and slut-shame (at)SenGillibrand? Do you know who you’re picking a fight with? Good luck with that, (at)realDonaldTrump. Nevertheless, (hash)shepersisted.”

Trump donated $ 4,800 to Gillibrand’s Senate campaign in 2010, according to federal campaign finance records.

White House spokesperson Sarah Huckabee Sanders pledged to provide a list of eyewitnesses whose accounts exonerated the president. She did not provide the list by late Monday.

Huckabee Sanders has also repeatedly said the U.S. voters decided the merits of the allegations by electing Trump president.

Trump has also actively campaigned for Roy Moore, who was vying Tuesday for a seat in the Senate representing Alabama, despite historic allegations of predatory behaviour toward teen girls, including one accuser’s allegation of an attempted sexual assault.

The Trump accusations surfaced during last year’s presidential campaign, but the three women raised the issue anew on Megyn Kelly Today and at a news conference.

“It was heartbreaking last year,” Holvey said. “We’re private citizens, and for us to put ourselves out there to try and show America who this man is and how he views women, and for them to say, ‘Eh, we don’t care,’ it hurt.”

The former beauty queen claimed that Trump ogled her and other Miss USA pageant contestants in their dressing room in 2006. Crooks is a former receptionist at Trump Tower and Leeds says she met Trump on a flight.

Sixteen women have come forward with a range of accusations against Trump, many after the release of the Access Hollywood tape last October in which Trump was caught on an open microphone bragging about groping women.

One woman, Summer Zevos, a contestant on Trump’s reality show, The Apprentice, sued, contending that Trump’s denials of her accusations amount to false and defamatory statements.