Reversing his past calls for a speedy exit, U.S. President Donald Trump recommitted the United States to the 16-year-old war in Afghanistan Monday night, declaring American troops must “fight to win.” He pointedly declined to disclose how many more troops will be dispatched to wage the country’s longest war.

In a prime-time address to unveil his new Afghanistan strategy, Trump said the U.S. would shift away from a “time-based” approach, instead linking its assistance to results and to co-operation from the beleaguered Afghan government, Pakistan and others. He insisted it would be a “regional” strategy that addressed the roles played by other South Asian nations — especially Pakistan’s harbouring of elements of the Taliban.

“America will work with the Afghan government as long as we see determination and progress,” Trump said. “However, our commitment is not unlimited, and our support is not a blank cheque.”

Still, Trump offered few details about how progress would be measured. Nor did he explain how his approach would differ substantively from what two presidents before him tried unsuccessfully over the past 16 years.

Although Trump insisted he would “not talk about numbers of troops” or telegraph military moves in advance, he hinted that he’d embraced the Pentagon’s proposal to boost troop numbers by nearly 4,000, augmenting the roughly 8,400 Americans there now.

Before becoming a candidate, Trump had ardently argued for a quick withdrawal from Afghanistan, calling the war a massive waste of U.S. “blood and treasure” and declaring on Twitter, “Let’s get out!” Seven months into his presidency, he said Monday night that though his “original instinct was to pull out,” he’d since determined that approach could create a vacuum that terrorists including al-Qaeda and ISIS would “instantly fill.”

“We will ask our NATO allies and global partners to support our new strategy, with additional troop and funding increases in line with our own. We are confident they will,” Trump said in comments echoed by Defense Secretary Jim Mattis. 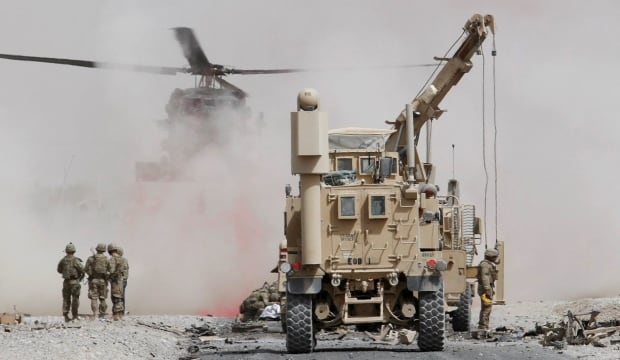 U.S. troops assess the damage to an armoured vehicle of NATO-led military coalition after a suicide attack in Kandahar province, Afghanistan, this month. (Ahmad Nadeem/Reuters)

Earlier this year, Trump announced he was entrusting Mattis and the military with the decision about how many troops would be needed.

While Trump stressed his strategy was about more than just the military, he was vague on other “instruments of American power” he said would be deployed in full force to lead Afghanistan toward peace, such as economic development or new engagement with Pakistan and India. Absent military specifics, it was difficult to assess how his plan might dissolve the stalemate between the Taliban and the Afghan government.

On one point — the definition of victory — Trump was unequivocal. He said American troops would “fight to win” by attacking enemies, “crushing” al-Qaeda, preventing terror attacks against Americans and “obliterating” ISIS, whose affiliate has gained a foothold in Afghanistan as the U.S. squeezes the extremists in Syria and Iraq. An Afghan National army soldier stands guard a checkpoint on the outskirts of Kabul on Monday. (Rahmat Gul/Associated Press)

Trump’s definition of a win notably did not include defeating the Taliban, the group whose sympathies for al-Qaeda led the U.S. to war in Afghanistan in the days after the 9/11 attacks. Like former president Barack Obama before him, Trump conceded that any solution that brings peace to Afghanistan may well involve the Taliban’s participation.

“Someday, after an effective military effort, perhaps it will be possible to have a political settlement that includes elements of the Taliban in Afghanistan,” Trump said. Secretary of State Rex Tillerson, in a statement after the speech, said the U.S. was ready to support peace talks with the Taliban “without preconditions.”

Talk of future Taliban reconciliation was one of several echoes of Obama woven into Trump’s plan. Like Trump, Obama insisted near the start of his presidency that the “days of providing a blank check are over,” urged a regional approach and said U.S. assistance would be based on performance.

Still, Trump was intent on differentiating his approach from his predecessors — at least in rhetoric. He emphasized there would be no timelines, no hamstringing of the military and no divorcing of Afghanistan from the region’s broader problems.

Trump’s speech concluded a months-long internal debate within his administration over whether to pull back from the Afghanistan conflict, as he and a few advisers were inclined to do, or to embroil the U.S. further. Several times, officials predicted he was nearing a decision to adopt his commanders’ recommendations, only to see the final judgment delayed.

And while Trump has pledged to put “America First,” keeping U.S. interests above any others, his national security advisers have warned that the Afghan forces are still far too weak to succeed without help. Even now, Afghan’s government controls just half the country. 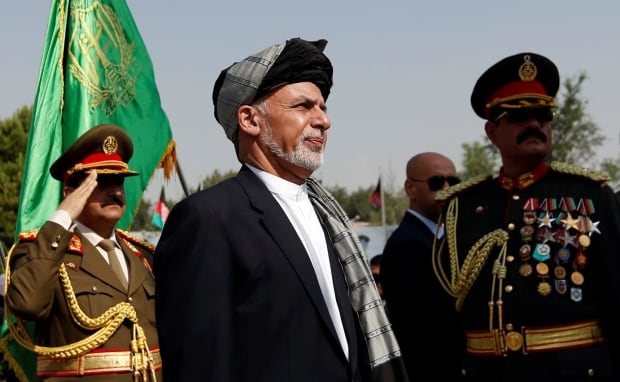 In Kabul, Taliban spokesman Zabiullah Mujahid dismissed Trump’s speech as “old” and his policy as “unclear.” But the plan was cheered by Afghanistan’s government. Ambassador Hamdullah Mohib, the Afghan envoy to Washington, called it a “10 out of 10.”

“We heard exactly what we needed to,” Mohib said in a phone interview. “The focus on the numbers has taken away the real focus on what should have been: what conditions are required and what kind of support is necessary.”

At its peak, the U.S. had roughly 100,000 in Afghanistan, under the Obama administration in 2010-2011. The residual forces have been focused on advising and training Afghan forces and on counterterror operations — missions that aren’t expected to dramatically change under Trump’s plan.

“I share the America people’s frustration,” Trump said. But he insisted, “In the end, we will win.”