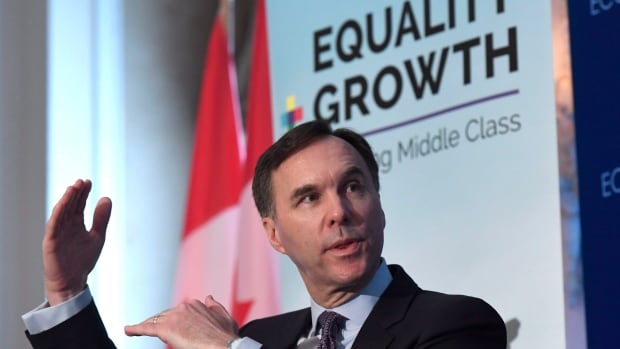 Speaking at the Economic Club of Canada in Ottawa to kick off a post-budget sales job, Morneau said many Canadians are without coverage, including people who are self-employed. Some parts of the system are working well but others are not, he said.

“We need a strategy to deal with the fact not everyone has access, and we need to do it in a way that’s responsible, that deals with the gaps, but doesn’t throw out the system that we currently have,” he said.

Eric Hoskins, Ontario’s former Liberal health minister, will chair a council that will consult with stakeholders and make recommendations to government on how to proceed with a national plan.

Morneau said the committee will need time to carefully study the issue because Canada’s workforce and the cost of pharmaceuticals have both changed dramatically over the last two decades.

In an interview with CBC Radio’s The House, which will air Saturday, Morneau said the government has a goal of ensuring all Canadians get the medication they need, but it does not yet have all the answers on how to get there.

For example, income levels may not necessarily determine need, he said.

“Sometimes those pharmaceuticals are so expensive that even … people that are above the middle income band will find themselves in a very difficult situation,” he told host Chris Hall.

Finance Minister Bill Morneau says the proposed pharmacare strategy in yesterday’s budget will not mean free medicine for all Canadians but will look at ways to augment the current system by filling in gaps for those who are not covered by health plans and are unable to afford them.1:30

Ontario adopted a pharmacare plan this year that offers free medication to babies, children and youth aged 24 and under who have OHIP coverage.

Called OHIP+, the program is expected to cost about $ 450 million a year and affect about four million people provincewide. It expands a program already providing coverage for Ontario’s seniors and those on Ontario Works, a provincial program that offers financial and employment help to residents of the province.

No cost estimate for a national pharmacare program was provided in the budget, prompting NDP Leader Jagmeet Singh to declare the strategy a “fantasy.”

“We need a universal program so we will all be a more healthy, and vibrant society,” he said.

The Canadian Health Coalition, which represents health advocates across Canada, was critical of the government’s plan to stop short of a universal public drug plan, calling it a betrayal of Canadians’ desire for what has been called by some the “unfinished business” of medicare.

“This is a cruel sleight of hand. Millions of Canadians have been waiting decades for life-saving medications and were ecstatic by the Liberals announcement yesterday,” said James Hutt, the CHC’s interim national director for policy and advocacy in a statement. “Now today they clarify that the Liberals want only partial drug coverage — not for everyone.”

The group said past polls have shown Canadians are in favour of such a plan and that it could save billions a year by negotiating lower prices and ending payments to insurance companies.

Stephen Frank, president and CEO of the Canadian Life and Health Insurance Association, said there is a need to close the gap for those falling through the cracks but said the government must aim to get the best bang for the public buck.

Frank said 24 million Canadians already have comprehensive and robust benefit packages that provide them access to everything they need, so he hopes the government will proceed with “smart reforms” to spend public money where the problems are.

“There’s a lot of good, concrete, very easily done ideas that would knit together a public and private system and smooth over some of those gaps, and we think they’re the right way forward,” he told CBC News.

An association representing pharmacists said in a news release that access to critical drugs is a serious problem.

“I see firsthand the difficulties my patients face when they cannot afford the medications they need to be healthy. This is unacceptable, and we are encouraged that the federal government will be looking at options for how to best serve these patients,” said Alistair Bursey, chair of the Canadian Pharmacists Association.

The groups said it is also important for medication to be properly dispensed, and that pharmacists often see patients who are on too many medications, or who aren’t taking them as directed.