Top officials in the White House were aware in early 2019 of classified intelligence indicating Russia was secretly offering bounties to the Taliban for the deaths of Americans, a full year earlier than has been previously reported, according to U.S. officials with direct knowledge of the intelligence.

The assessment was included in at least one of President Donald Trump’s written daily intelligence briefings at the time, according to the officials. Then-national security adviser John Bolton also told colleagues he briefed Trump on the intelligence assessment in March 2019.

The White House did not respond to questions about Trump or other officials’ awareness of Russia’s provocations in 2019. The White House has said Trump was not — and still has not been — briefed on the intelligence assessments because they have not been fully verified. However, it is rare for intelligence to be confirmed without a shadow of a doubt before it is presented to top officials.

Bolton declined to comment Monday when asked by the AP if he had briefed Trump about the matter in 2019. On Sunday, he suggested to NBC’s Meet the Press that Trump was claiming ignorance of Russia’s provocations to justify his administration’s lack of a response.

“He can disown everything if nobody ever told him about it,” Bolton said.

The revelations cast new doubt on the White House’s efforts to distance Trump from the Russian intelligence assessments. The AP reported Sunday that concerns about Russian bounties were also included in a second written presidential daily briefing earlier this year and that current national security adviser Robert O’Brien had discussed the matter with Trump. O’Brien denies he did so.

The administration’s earlier awareness of the Russian efforts raises additional questions about why Trump did not take any punitive action against Moscow for efforts that put the lives of Americans service members at risk. Trump has sought throughout his time in office to improve relations with Russia and its president, Vladimir Putin, moving earlier this year to try to reinstate Russia as part of a group of world leaders it had been kicked out of.

Officials said they did not consider the intelligence assessments in 2019 to be particularly urgent, given that Russian meddling in Afghanistan is not a new occurrence. The officials with knowledge of Bolton’s apparent briefing for Trump said it contained no “actionable intelligence,” meaning the intelligence community did not have enough information to form a strategic plan or response. However, the classified assessment of Russian bounties was the sole purpose of the meeting.

The officials insisted on anonymity because they were not authorized to disclose the highly sensitive information.

The intelligence that surfaced in early 2019 indicated Russian operatives had become more aggressive in their desire to contract with the Taliban and members of the Haqqani Network, a militant group aligned with the Taliban in Afghanistan and designated a foreign terrorist organization in 2012 during the Obama administration.

The National Security Council and the undersecretary of defence for intelligence did hold meetings regarding the intelligence. The Pentagon declined to comment and the NSC did not respond to questions about the meetings.

Concerns about Russian bounties flared anew this year after members of the elite Naval Special Warfare Development Group, known to the public as SEAL Team Six, raided a Taliban outpost and recovered roughly $ 500,000 US. The funds bolstered the suspicions of the American intelligence community that the Russians had offered money to Taliban militants and other linked associations.

The White House contends the president was unaware of this development as well. However, the information was also included in the presidential daily briefing. And officials told the AP that O’Brien did brief Trump on the matter. O’Brien has denied such a briefing occurred.

The officials told the AP that career government officials developed potential options for the White House to respond to the Russian aggression in Afghanistan, which was first reported by The New York Times. However, the Trump administration has yet to authorize any action.

The intelligence in 2019 and 2020 surrounding Russian bounties was derived in part from debriefings of captured Taliban militants. Officials with knowledge of the matter told the AP that Taliban operatives from opposite ends of the country and from separate tribes offered similar accounts.

The officials would not name the specific groups or give specific locations in Afghanistan or time frames for when they were detained.

Dmitry Peskov, a spokesperson for Russian President Vladimir Putin, denied that Russian intelligence officers had offered payments to the Taliban in exchange for targeting U.S. and coalition forces.

The U.S. is investigating whether any Americans died as a result of the Russian bounties. Officials are focused in particular on an April 2019 attack on an American convoy. Three U.S. Marines were killed after a car rigged with explosives detonated near their armoured vehicles as they returned to Bagram Airfield, the largest U.S. military installation in Afghanistan.

The Marines exchanged gunfire with the vehicle at some point; however, it’s not known if the gunfire occurred before or after the car exploded.

Abdul Raqib Kohistani, the Bagram district police chief, said at the time that at least five Afghan civilians were wounded after the attack on the convoy, according to previous reporting by the AP. It is not known if the civilians were injured by the car bomb or the gunfire from U.S. Marines.

Hendriks’ father told the AP that even a rumour of Russian bounties should have been immediately addressed.

“If this was kind of swept under the carpet as to not make it a bigger issue with Russia, and one ounce of blood was spilled when they knew this, I lost all respect for this administration and everything,” Erik Hendriks said.

Marine Major Roger Hollenbeck said at the time that the reserve unit was a part of the Georgia Deployment Program-Resolute Support Mission, a reoccurring, six-month rotation between U.S. Marines and Georgian Armed Forces. The unit first deployed to Afghanistan in October 2018.

Three other service members and an Afghan contractor were also wounded in the attack. As of April 2019, the attack was under a separate investigation, unrelated to the Russian bounties, to determine how it unfolded.

The officials who spoke to the AP also said they were looking closely at insider attacks — sometimes called “green-on-blue” incidents — from 2019 to determine if they are also linked to Russian bounties.

As vaping products and promoting them become prevalent, health professionals warn that e-cigarettes are not as safe as many people believe.

"I think there's a general belief out there that if you switch from smoking to vaping that your problems are solved," said Michael Glogauer, a professor at the University of Toronto's Faculty of Dentistry.

Nicotine vaping products became legal in Canada in recent months, and last week, the Ontario government released proposed changes to legislation on vaping products in convenience stores that would allow companies to display and advertise their products — something banned in seven other provinces.

Meanwhile, a 2017 report from the University of Waterloo's Propel Centre for Population Health Impact shows e-cigarette use is increasing, especially among young people. 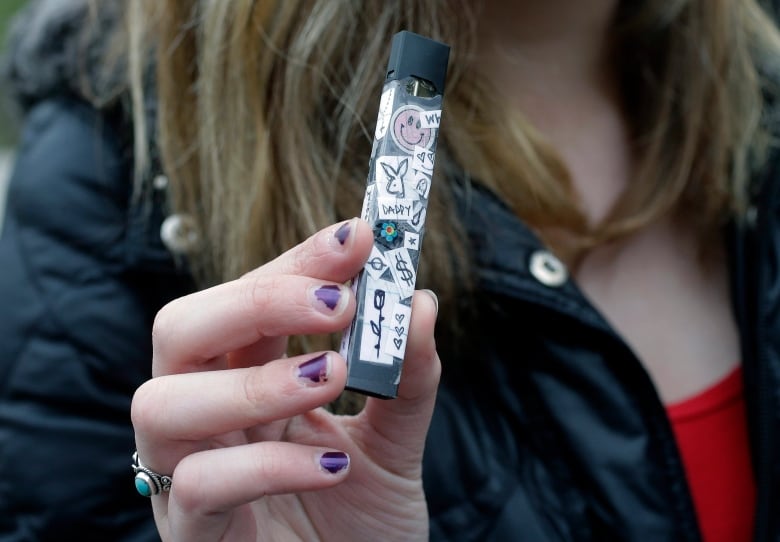 "It's pretty dramatic. I think the rates among young people have tripled," said Rob Schwartz, executive director of the Ontario Tobacco Research Unit.

"All of the data we've seen so far in Canada is showing substantial increases each year."

Still, many experts believe vaping is less harmful than cigarettes, but there are some significant health concerns they believe consumers should be aware of.

When a new drug comes to Canada, it must pass a number of tests, according to Schwartz. E-cigarettes aren't considered a drug, so they've been left mostly unregulated since they appeared on the market about a decade ago, he said.

"If we had pre-market approval, then any device like this, any product like this that might be harmful to your health would have to first be approved for use. "

The federal government's amendments to the Tobacco and Vaping Products Act earlier this year provided a framework for the sale of vaping products, including requiring bottles to be clearly marked with the toxicity hazard symbol and clear warnings. But they did not create regulations for the manufacturing of "e-juice," the liquid in e-cigarettes.

The only limitation is that nicotine in amounts greater than 66 milligrams per gram is prohibited for sale.

"Anybody can just go and make e-liquid and sell it, which is terrible," he said.

"There's no standard operating protocol that's ever been created for anything like this … It's a niche market, but it's also very new, so we don't know. Technically nobody knows how to make e-liquid."

In an email, a spokesperson with Health Canada said the department is conducting research and reviewing available studies to better understand the health impacts of vaping products.

"Except for nicotine, vaping products typically only contain a fraction of the 7,000 chemicals found in tobacco or tobacco smoke, and at lower levels. Switching completely from tobacco cigarettes to vaping products will reduce a person's exposure to many toxic and cancer-causing chemicals," the spokesperson said.

Abou-Jaoude said his e-juices are generally made of vegetable glycerin, artificial flavours, nicotine and propylene glycol, a common food additive and flavouring. The health risks of inhaling it are unknown.

Abou-Jaoude said they try to follow reports on the "safe" amounts of each component to add, but he's particularly skeptical of the artificial flavouring. 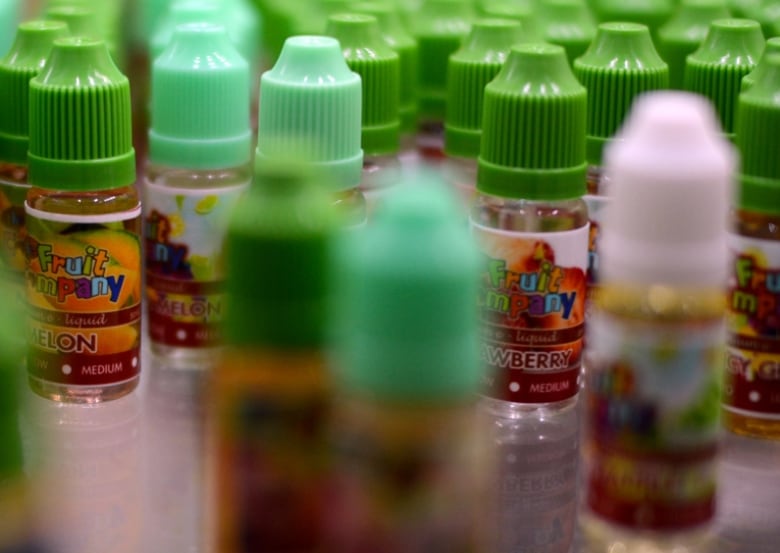 "We're not really sure what the long-term effects are of inhaling artificial flavouring," he said.

Dr. José Lança, an assistant professor specializing in pharmacology at the University of Toronto, said when people vape, "they are also ingesting or breathing in other chemicals, including hydrocarbons" that can cause cancer with repeated use.

"They [hydrocarbons] are very similar, some of them are exactly the same, as you find in cigarettes," he said.

Nicotine in many e-cigarettes creates many of the same oral health problems as regular cigarettes, according to Glogauer.

"What it does is it causes the blood vessels in the tissues to shrink inside so less blood gets delivered to the tissues," he said.

The process causes gum recession, bad breath and increases teeth grinding, he said, and the heat from smoking causes a dry mouth.

Glogauer said nicotine also reduces the typical inflammation and discolouration caused by cigarettes, and that can hide gum disease.

The amount of nicotine in a particular e-juice can vary, but Glogauer said there are also harmful chemicals in e-juice smoke that are not present in cigarette smoke.

"So diethylene glycol, we actually don't know what it does and that's bad," he said. "That's scary for us as clinicians.

As well, the menthol in e-juices, Glogauer said, can lead to the breakdown of skin cells, the primary protective barrier that protects tissues.

"These chemicals that are present may be causing a whole new set of problems that we're not aware of, and that won't become apparent for the next five or 10 years," he said.

"It's really these sort of patients who are acting as their own sort of guinea pigs."

"Current information indicates that diethylene glycol is rarely detected in vaping liquids and, when it is found … it is likely a contaminant and not intentionally added," the statement said.

Still, many experts believe those who cannot quit smoking should use vaping as an alternative. Health Canada agrees vaping is a less harmful source of nicotine than smoking. 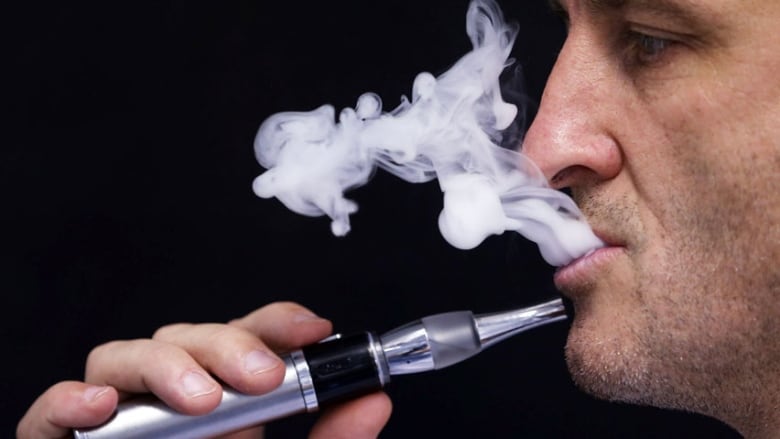 The provincial government is proposing changes to the Smoke-Free Ontario Act, which would allow convenience stores to display and promote e-cigarettes. (Regis Duvignau /Reuters)

"It's inorganic to be putting anything into your lungs," he said, but added that vaping might help curb the "epidemic" of tobacco-related illnesses.

"If you're not a smoker, don't vape. The reason is that vaping of particularly nicotine e-cigarettes … can create dependence."