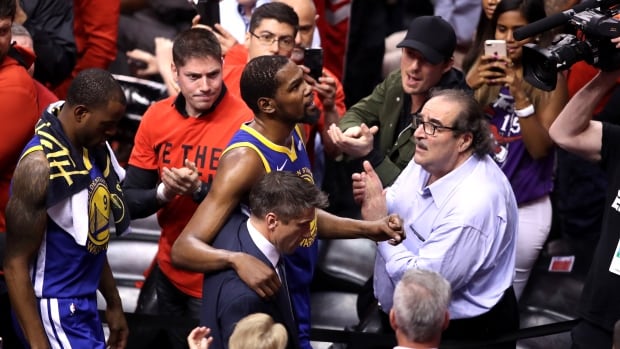 Facing the basket and seeing an opening, Kevin Durant made a quick move to his left — a move he’s made thousands of times.

A second later, the Golden State Warriors star crumpled to the hardwood, clutching the Achilles tendon in his right leg.

Large sections of Raptors fans at a frothing Scotiabank Arena initially cheered, knowing what Durant — who had just returned to the lineup after a month on the sidelines — going down might mean for Toronto’s chances of winning the franchise’s first title.

Toronto’s Kyle Lowry, Serge Ibaka and Danny Green waved their hands to try to get the fans to stop the cheering after Durant hit the floor, and many soon turned to applause and muted “K-D” chants as he was helped off the court early in the second quarter.

The Warriors’ forward appeared to re-injure his right leg during the second quarter on Monday night. 1:07

Too little, too late

But in the eyes of the Warriors, it was too little, too late.

Fighting back tears, Warriors general manager Bob Myers addressed the media after the game, confirming Durant suffered an injury to his Achilles tendon. The finals MVP in both 2017 and 2018 playing for the first time since May 8 because of a calf problem. On Tuesday, he’ll have an MRI.

“Prior to coming back [Durant] went through four weeks with a medical team, and it was thorough, and it was experts and multiple MRIs and multiple doctors, and we felt good about the process,” said Myers, who added this injury is different than the one suffered earlier in the playoffs. “He was cleared to play [in Game 5]. That was a collaborative decision.

“I don’t believe there’s anybody to blame, but I understand this world and if you have to, you can blame me.”

WATCH | Kerr at a loss for words after emotional win:

Kerr describes his conflicting emotions after winning Game 5 and losing star Kevin Durant to another injury. 0:43

Durant went through Golden State’s full morning shootaround earlier in the day and was originally a game-time decision.

“Kevin takes a lot of hits sometimes, but he just wants to play basketball and right now he can’t,” Myers said. “Basketball has gotten him through his life. So it means, I don’t know that we can all understand how much it means to him.

“He just wants to play basketball with his teammates and compete.”

DeMarcus Cousins, who had been starting in Durant’s place and subbed in after he went down, shared Green’s feelings on the crowd’s response to their teammate going down.

“Trash. So trashy,” said Cousins, who suffered a torn Achilles of his own last season. “We only idolize superstar athletes, not human beings. It’s always about what we can do between those lines.

“That’s it. That’s all that ever matters.”

Canadian rapper/Raptors global ambassador Drake, who isn’t shy with the trash talk, put a consoling hand on the six-foot-nine Durant as he headed for the locker-room.

Lowry tried to give the crowd the benefit of the doubt.

“I don’t think the fans knew the significance of the injury,” he said. “They kind of [had] just seen he went down. In this league, we’re all brothers. At the end of the day, we’re all brothers and it’s a small brotherhood and you never want to see a competitor like him go down.”

Golden State’s Stephen Curry, who accompanied Durant down the tunnel with Andre Iguodala, was surprised by the fan response.

“Very confused around that reaction. It’s not my experience with the people of this city,” said Curry, who lived in Toronto when his father played for the Raptors from 1999 to 2002. “You understand this is about an individual, a human being and not, ‘Oh, shoot he’s out, he’s hurt, we won the championship.’ That was probably their initial thought and you hate to see that when a guy’s going through pain like that.

“I just hope that ugliness doesn’t show itself again as we go forward in this series.”

Steph Curry discussed his disappointment to how Raptors’ fans responded when Kevin Durant left the game with a leg injury. 1:17

Durant scored 11 points, including going 3-for-3 from three-point range, in just under 12 minutes of action before the injury.

Cousins stepped up with seven straight points after subbing in, finishing the night with 14 overall on 6-of-8 shooting.

“I’m just trying to play my part, whatever it takes to help this team win,” Cousins said. “We pulled out a tough one.”

Green credited Curry, who finished with a game-high 31 points, with helping to calm Golden State’s bench down after Durant left.

“You could just kind of feel the life go right out of us,” Green said. “But to Steph’s credit, he kind of rallied the troops.

“We did a good job of coming together and leaning on each other.”