U.S. President Donald Trump continues to insist there is not enough evidence to blame Mohammed bin Salman for journalist Jamal Khashoggi's killing and on Thursday said he "didn't want to talk about" a report that a recording exists that incriminates the Saudi crown prince.

"Maybe the world should be held accountable 'cause the world is a vicious place," Trump said during a Thanksgiving appearance at his Mar-a-Lago property in Palm Beach, Fla.

Democrats and Republicans have accused Trump of ignoring U.S. intelligence that concluded, according to one U.S. official, that it was likely the crown prince ordered the killing. Several lawmakers have indicated that the U.S. has no "smoking gun" that proves he was responsible, but they have called on the CIA and other top intelligence agencies to publicly share what they told the president about the slaying.

Trump said the CIA had "feelings" on the matter but didn't reach a conclusion.

"The CIA doesn't say they did it," he said. "They do point out certain things. And in pointing out those things, you could conclude that maybe he did or didn't."

The Turkish newspaper Hurryet reported on Thursday CIA director Gina Haspel signalled to Turkish officials last month that the agency had a recording of a call in which the crown prince discusses wanting to "silence" Khashoggi.

Hey <a href="https://twitter.com/realDonaldTrump?ref_src=twsrc%5Etfw">@realdonaldtrump</a>: being Saudi Arabia’s bitch is not “America First.”

Trump also pushed back on the idea that his refusal to punish the Saudis more will embolden other governments to go after journalists and commit other human rights abuses.

"If we went by this standard, we wouldn't be able to have anybody as an ally because look what happens all over the world?" said Trump.

The president also emphasized that bin Salman has denied knowing about the operation.

"I hate the crime, I hate the coverup. I will tell you this — the crown prince hates it more than I do, and they have vehemently denied it."

Secretary of State Mike Pompeo earlier this week stressed the U.S. has already placed sanctions on 17 Saudi officials suspected of involvement in the Oct. 2 killing of the Washington Post columnist, who had been critical of the royal family.

"We are going to make sure that America always stands for human rights," Pompeo said in an interview with a Kansas City radio station.

Some Republicans push back

Trump's stance has also exposed a foreign policy rift in the Republican Party.

"I fully realize we have to deal with bad actors and imperfect situations on the international stage, but when we lose our moral voice, we lose our strongest asset," said Sen. Lindsey Graham of South Carolina on Tuesday.

Graham has earlier characterized the crown prince is "irrational" and "unhinged" and said there is strong, bipartisan support in Congress for harsher sanctions against Saudi Arabia and members of the royal family. 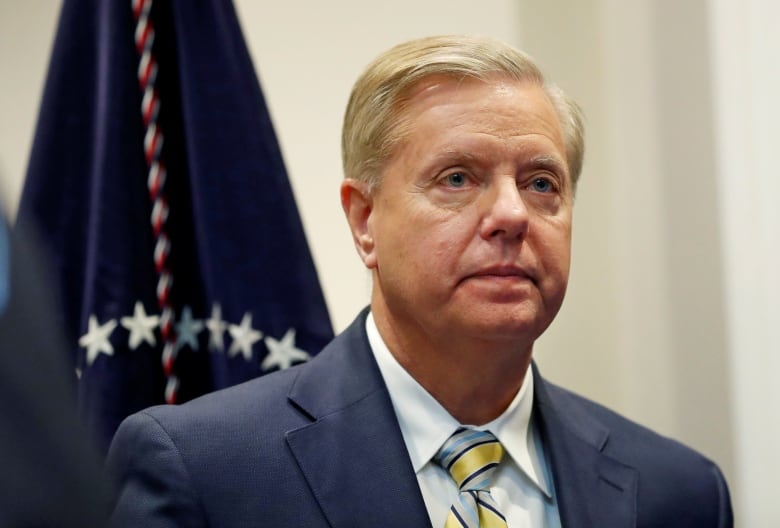 Sen. Bob Corker of Tennessee said he was "astounded" by Trump's statement and likened it to a press release for Saudi Arabia, while Sen. Rand Paul of Kentucky called it "Saudi Arabia First."

Saudi prosecutors have said a 15-man team sent to Istanbul killed Khashoggi with tranquilizers and then dismembered his body, which has not been found. Those findings came after Saudi authorities spent weeks denying Khashoggi, a resident of the U.S., had been killed in the consulate.

Bin Salman said earlier this month at an international conference in Riyadh: "The incident is not justifiable. Justice in the end will appear."

Trump, in a statement on Tuesday, argued that punishing Saudi Arabia by "foolishly cancelling" Saudi arms deals worth billions of dollars to the U.S. would only benefit Russia and China.

The statement again pit Trump against U.S. intelligence, as has happened with the subject of Russian interference into the 2016 presidential election. Trump has publicly doubted intelligence claims and has talked up Russian President Vladimir Putin's denials of meddling in American affairs.

Trump also said the U.S. needs Saudi Arabia's help to counter Iran in the region, fight extremism and keep oil prices steady. The U.S., Russia and the Saudis have boosted oil production in anticipation of sharply lower exports from Iran due to U.S. sanctions reinstated after Trump exited the Iran nuclear deal.

I have the oil prices low because I'm jawboning them and others all the time to keep them low. – Donald Trump, U.S. president

On Thursday, Trump continued: "I have the oil prices low because I'm jawboning them and others all the time to keep them low. No president ever did that. And gasoline is now at a very low number."

He also pointed to what he said would be a devastating impact from pulling back from the relationship, without providing any supporting evidence.

Criticism of the president will likely resume when lawmakers return to Capitol Hill early next week.

Twenty-two members of the Senate — 11 Republicans and 11 Democrats — have triggered investigations into Khashoggi's death and specifically whether the crown prince was responsible. The investigations were requested under provisions of the Global Magnitsky Human Rights Accountability Act. 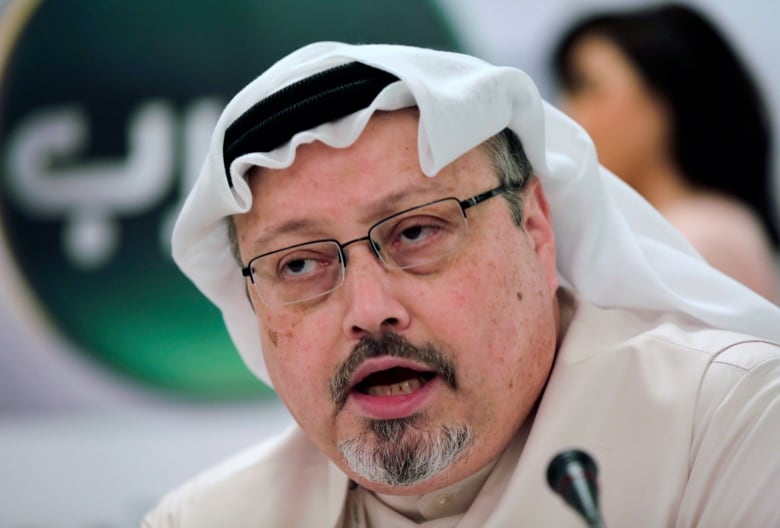 The Saudis denied for several days having any involvement in Jamal Khashoggi's disappearance and killing. (Hasan Jamali/Associated Press)

The act requires the president to report back to the Senate's foreign relations committee within 120 days — in this case by Feb. 7 — on whether the crown prince was responsible for an extrajudicial killing, torture or other gross violation of internationally recognized human rights against a person exercising freedom of expression and the administration's decision on whether sanctions are warranted.

In addition, three Democrats and three Republicans have introduced the Saudi Arabia Accountability and Yemen Act of 2018. Among other things, the bill calls for suspending weapons sales to Saudi Arabia and imposing mandatory sanctions on all those responsible for Khashoggi's death and those blocking access to Yemen, where a long war has led to a humanitarian crisis.

Meanwhile, France said on Thursday that it was imposing sanctions on 18 Saudi citizens linked to the murder.

"France asks that all light be shed on the manner in which such an act may have been committed. It expects from the Saudi authorities a transparent, detailed and exhaustive response," France's foreign ministry said in a statement.