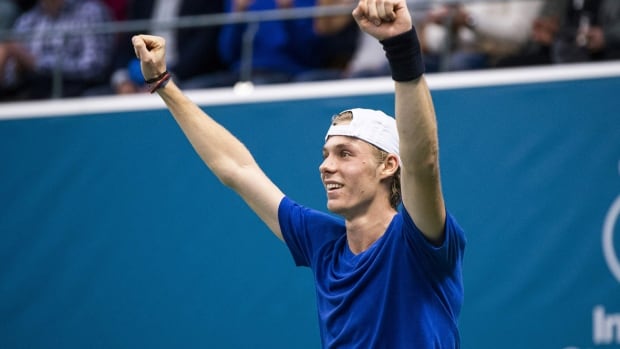 Winning his first ATP Tour title was a significant career milestone. Canada’s Denis Shapovalov also drew confidence from the way he did it.

The 20-year-old from Richmond Hill, Ont., says he wasn’t tense or afraid to lose when he stepped on court for his first tour final Sunday at the Stockholm Open.

The exhilaration of reaching new tennis territory — and finally slaying the semifinal dragon after going 0-7 — shone through in a straight-sets 6-4, 6-4 win over Serbia’s Filip Krajinovic.

“I hadn’t really gotten past the point of the semifinals so I wasn’t sure how I was going to feel being in the finals for the first time in a while and the first time in an ATP final,” Shapovalov said Monday during a Tennis Canada conference call.

“Not nervous at all to be honest. I was really happy to go out there and show everybody my game and have a chance to kind of celebrate and play in something as special as an ATP final. It was great that I approached it in a really excited way.

“I think it’s a really big confidence-booster for me for the future knowing that first of all I have a title under my belt and I can play more relaxed, but also I really get up for these matches and I get really excited.”

Shapovalov’s victory was the first by a Canadian man since Milos Raonic of Thornhill, Ont., won in Brisbane, Australia, in January 2016.

Shapovalov ascended seven rungs in Monday’s world rankings to No. 27, which is his highest position since July 7.

I think my whole game was pretty on. I was serving well. I was moving really effectively on those courts.— Canada’s Denis Shapovalov

The Canadian joins Montreal’s Felix Auger-Aliassime (18) and Raonic (32) in the field of this week’s Erste Bank Open in Vienna, Austria.

Shapovalov meets No. 34 Pablo Carreno Busta of Spain in the first round.

“I feel my form is there mentally,” Shapovalov said. “I feel really fresh to play.

“I’ve got a pretty tough draw this week playing Carreno Busta first round. I lost to him recently, but at the same time I’m feeling pretty confident. Having a win behind your back is always helpful.”

The tournament’s fourth seed in Stockholm, Shapovalov had the advantage of a first-round bye.

“It gave me a lot of time to prepare for those courts, for the balls there. They’re a little bit different,” he explained.

“I think my whole game was pretty on. I think I was serving well. I was moving really effectively on those courts. It felt like everything was kind of working for me.”