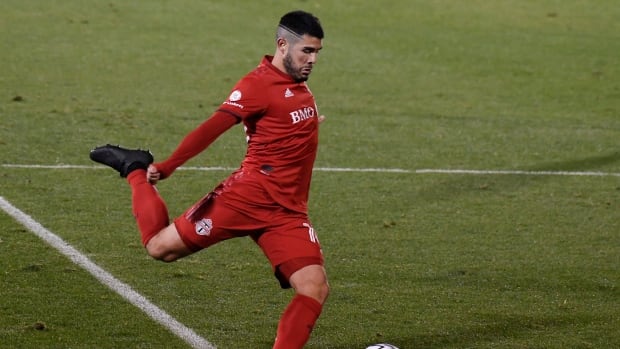 Less than a year after agreeing to a new five-year collective bargaining agreement, Major League Soccer and its players union are heading back to the bargaining table.

The league has told the MLS Players Association that it will trigger a “force majeure” clause in the agreement signed in January because the COVID-19 pandemic has had drastic impacts on its business.

A source with knowledge of the situation says the lack of fans has led to a significant lack of revenue and the intention of triggering the clause is to discuss modifications to the agreement over a 30-day period.

The MLS regular season was put on hold in mid-March after the virus began to spread across North America. Games began again in July with the MLS is Back tournament held in a “bubble” in Orlando.

American teams finished out the campaign in mostly empty home stadiums, but border restrictions forced the three Canadian clubs — Toronto FC, the Montreal Impact and the Vancouver Whitecaps — to temporarily move south to finish out their seasons.

MLS president and deputy commissioner Mark Abbott says in a statement that players received 95 per cent of their salaries in 2020 and the league lost nearly $ 1 billion US.

The players union says triggering the force majeure clause could result in the league and club owners abandoning the new collective bargaining agreement and commitments that have been made to players.

“After a 2020 season of extreme sacrifice, immeasurable risk to personal health, and a remarkable league-wide effort to successfully return to play, this tone-deaf action by the league discredits the previous sacrifices made by players and the enormous challenges they overcame in 2020,” the MLS Players Association said in a statement.

Information from health officials shows that there will continue to be restrictions on fans attending sporting events through the 2021 MLS season, so changes need to be made, Abbott said.

“We recognize the impact that the pandemic has had on our players and appreciate their efforts to restart and complete the 2020 season,” he said in a statement. “But, like the other leagues in the United States and Canada, MLS needs to address the ongoing challenges caused by the pandemic and will engage in good faith discussions with our players about ways to manage the significant economic issues we are facing.”

The global average temperature is set to rise to at least 1.2 to 1.3 degrees Celsius above pre-industrial levels over the next five years, a World Meteorological Organization (WMO) official said on Monday, close to a limit adopted in a global treaty.

The prediction comes as governments are due to meet in New York for the UN Climate Action Summit to build on their pledges from the 2015 Paris Agreement, which aims to cap the global temperature rise at 1.5 degrees.

The agreement, adopted by almost 200 nations, set a goal of limiting warming to “well below” a rise of 2 C above pre-industrial times while “pursuing efforts” for the tougher 1.5 C goal.

A rise of 2 C is expected to wipe out more than 99 per cent of  coral reefs and melt most of the sea ice in the Arctic.

“Basically we are on track to reach at least 1.2 to 1.3 degrees centigrade [above pre-industrial levels] over the next five years,” Omar Baddour, WMO senior scientific officer, said in response to a Reuters question at a Geneva news conference.

“It needs drastic actions,” he added.

The comments came after the UN agency released a report on Sunday showing that the period from 2015 to 2019 was set to be the warmest five-year period on record, rising by 0.2 degrees Celsius over 2011-2015.

“Not only are these statistics alarming they dispel any false sense of security that maybe we will muddle through this,” said Maxx Dilley, director of the climate prediction and adaptation division of the WMO, told journalists.

“There is going to have to be a dramatic scale up in the level of ambition and as well as in the level of actual follow through on the current policies that are intending to address this,” he added.

The WMO report also showed record carbon dioxide and other greenhouse gases in the atmosphere recorded over the same period, with the pace of carbon dioxide growth up 20 per cent versus the last five-year assessment.

There is a lag in the period that the world’s climate responds to carbon dioxide and other gasses, meaning that the emissions produced today can affect temperatures 20 years later, Dilley added, locking in the warming trend.