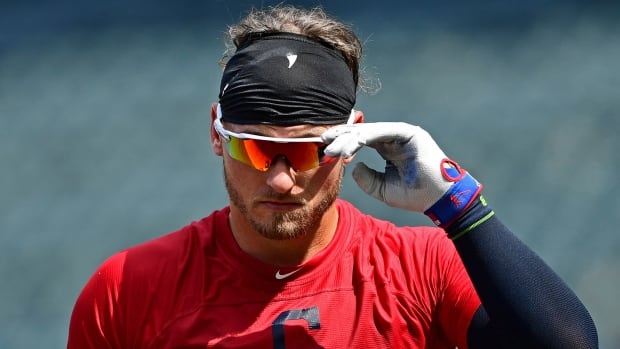 Josh Donaldson admits it's tough to say goodbye to the Toronto Blue Jays.

“It’s … been difficult to the extreme that I am leaving an organization that I was very much a big part of,” the new Cleveland Indians third baseman said Sunday in an introductory press conference after a trade on Friday.

"I had some quality years there that I'm not going to forget. But I'm also looking forward to trying to help this team win and moving forward as well."

Watch the full press conference as Josh Donaldson meets with the press in Cleveland. 7:44

The Blue Jays dealt the 2015 AL MVP to the Indians for a player to be named later, continuing a rebuild process that has seen the team cut ties with some of its biggest stars from the 2015-16 playoff squads.

Donaldson has been out of the Blue Jays lineup since late May, dealing with a nagging calf injury. He played in a rehab game with single-A Dunedin on Tuesday, allowing the Blue Jays to place Donaldson on waivers and trade him prior to Friday's deadline for players to become eligible to join a post-season roster.

"If I was writing a book, it's not how I would have wanted it to go, but hopefully it has a happy ending," said Donaldson, who becomes a free agent at the end of the season.

Donaldson did not provide a timeline for his return, but seemed to indicate he won't be out too much longer.

"I feel very good about where I'm at right now," said Donaldson, who took batting practice and worked out with the Indians before Sunday's game. "I'd rather not talk about it. I'd rather you just be able to see it and make a judgement for yourself."

"We had a lot of fond memories together as teammates … I'm sure if you asked him as well, we're excited about creating some new ones," Donaldson said.

While the ending in Toronto was anything but perfect, Donaldson said he's happy to be in Cleveland.

"I was excited because of the players you have in this clubhouse and how they've been able to have success throughout the years," he said. "I'm also excited [because] if you probably go look back at my numbers in this ballpark, they're pretty nice. I'm glad I'm going into a situation where I've had success before."

The 32-year-old Donaldson batted .234 with five home runs and 16 RBIs this season for the Blue Jays. He hasn't played since May 28 because of the calf injury. He also was out from April 11-May 2 with a shoulder problem.

Donaldson's addition will cause position changes. Jose Ramirez will move from third to second and Jason Kipnis, the starting second baseman, will begin taking fly balls in centre field.

Antonetti acknowledged the situation will lead to uncertainty, especially since it isn't clear when Donaldson will be ready.

"They're obviously tied together," he said. "All three guys with Kip, Josh and Jose. All of their plans are interdependent. Once we have an idea what Josh's plan will be, that will inform our conversations with Jason and Jose."

The Indians begin a four-game series in Toronto on Thursday.