U.S. Attorney General William Barr said on Thursday that special counsel Robert Mueller’s investigation did not find that Donald Trump or members of his campaign worked with Russia during the 2016 presidential election, but the report appeared to paint a picture of a president taking steps to control the investigation and not fully co-operating with the probe.

Mueller’s investigation did not establish that Trump committed a crime but also did not exonerate him, the report said.

Earlier in the day, Trump’s recently appointed attorney general focused largely on one part of that conclusion.

The “investigation did not establish that members of the Trump campaign conspired or co-ordinated with the Russian government in its election interference activities,” William Barr told a news conference.

After Barr spoke, Trump’s account on Twitter posted a prepared graphic that blared “GAME OVER” with a similar conclusion, which blamed “radical left Democrats.” He made similar remarks at a previously scheduled White House event on Thursday.

Attorney General William Barr says the Mueller report found no evidence that any American coordinated with the Russian government or hackers. 1:13

Trump’s legal team released a statement in which it characterized the report as a “total victory for the president.”

“It is clear there was no criminal wrongdoing. Nothing withheld; nothing concealed; nothing deleted; nothing destroyed; and nothing bleached,” his lawyers Rudy Giuliani, Jay Sekulow, Jane Raskin and Martin Raskin said in a statement.

The president never sat for an interview with Mueller during the nearly two-year investigation, despite indicating on several occasions his willingness to do so. Even so, Barr said the “White House fully co-operated with the special counsel’s investigation, providing unfettered access to campaign and White House documents, directing senior aides to testify freely.”

But Mueller’s 448-page report said Trump’s written responses to submitted questions by the special counsel were “inadequate,” though it was ultimately decided not to issue a subpoena to force Trump to give an interview to the special counsel because it would have created a “substantial delay” at a late stage in the investigation.

The Mueller report indicated that in June 2017 Trump directed White House lawyer Don McGahn to tell then-acting attorney general Rod Rosenstein that Mueller had conflicts of interest and must be removed from his role. McGahn refused to carry out the order to fire Mueller, “for fear of being seen as triggering another Saturday Night Massacre,” referring to a term used during President Richard Nixon’s Watergate scandal.

The report indicated that Trump directed aides numerous times not to disclose emails about a controversial June 2016 meeting in New York with a Russian lawyer who had promised dirt on Hillary Clinton, which was attended by his son Donald Trump Jr. and his son-in-law and current White House adviser Jared Kushner.

Mueller said there was no documentary evidence that Trump knew his son, son-in-law and others were taking the Trump Tower meeting until after it occurred.

Elsewhere, Mueller wrote, “there is evidence that could support the inference the president intended to discourage [MIchael Cohen] from co-operating” with the investigation, referring to the president’s former personal lawyer, who will begin a three-year prison sentence next month.

Mueller submitted the report to Barr on March 22. Two days later, Barr told lawmakers in a four-page summary that the inquiry did not establish that Trump’s 2016 campaign team engaged in a criminal conspiracy with Russia and that Mueller had not exonerated Trump of committing the crime of obstruction of justice.

Attorney General William Barr says evidence in the special counsel’s report is not ‘sufficient’ to establish that the president committed obstruction of justice. 1:25

Barr subsequently concluded that Trump had not committed obstruction of justice, but Mueller’s report concluded it could not clear him of that charge, appearing to defer to the U.S. system of checks and balances in government to grapple with that question.

“[W]e concluded that Congress has the authority to prohibit a president’s corrupt use of his authority in order to protect the integrity of the administration of justice,” the report said.

Barr said Thursday that he and Rosenstein, now the deputy attorney general, “disagreed with some of the special counsel’s legal theories and felt that some of the episodes examined did not amount to obstruction as a matter of law.” 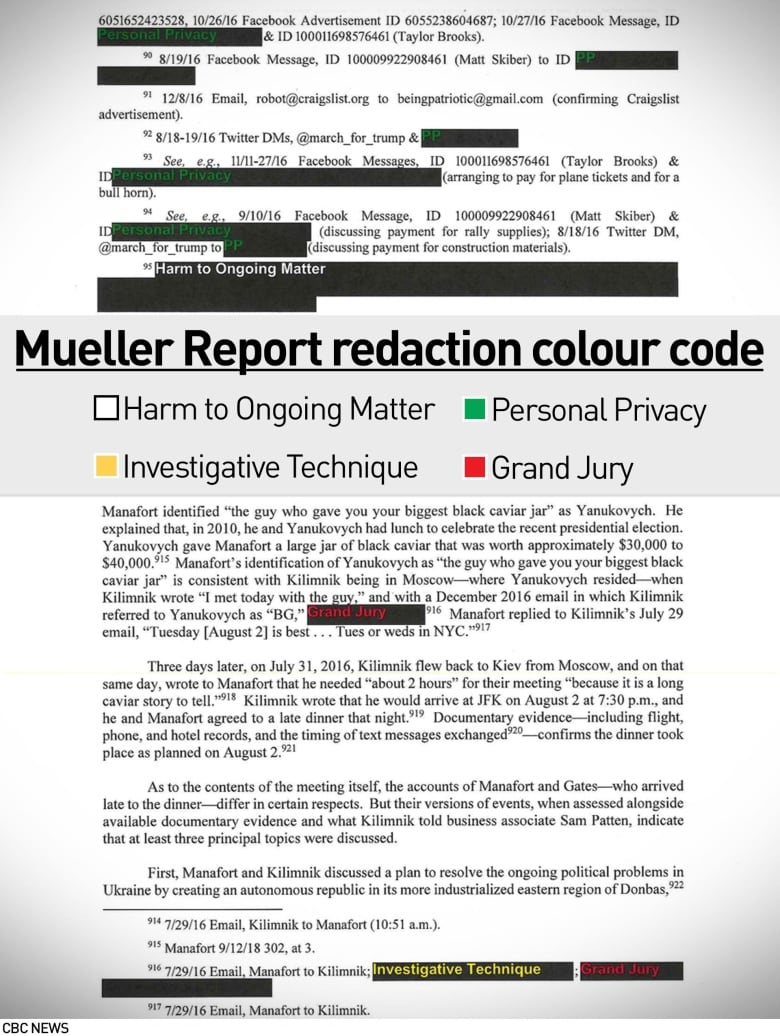 Barr, confirmed as attorney general in February, said the president’s personal counsel “requested and were given the opportunity” to read the redacted report, and that Trump did not invoke executive privilege over any portions of the report.

The redacted report was then delivered to Congress and then uploaded to the special counsel’s website shortly after 11 a.m. ET on Thursday.

Democrats have vowed to fight in court for the disclosure of the additional information from the report and say they have subpoenas ready to go if it is heavily redacted. They are also interested in seeing Mueller testify on Capitol Hill.

Mueller, a former FBI director, never spoke publicly during the course of the investigation.

While Mueller often couldn’t make a conclusion as to Trump’s motives, Barr said the president was “frustrated and angered by a sincere belief that the investigation was undermining his presidency, propelled by his political opponents, and fuelled by illegal leaks.”

While Trump and his allies will claim exoneration, there are still inquiries in and out of Congress, including regarding Trump Organization finances and allegations whether inauguration money was spent improperly.

Trump Jr. also could be the subject of further Democratic Party inquiries. The report said Trump Jr. had direct contacts during the campaign with WikiLeaks, which released hacked emails of Clinton officials. Trump Jr. also had password access to a confidential WikiLeaks site, it said.

“The attorney general should be the nation’s top law enforcement officer — not a spokesman for the president,” said Inslee, the Democratic governor of Washington state.

Dear <a href=”https://twitter.com/TheJusticeDept?ref_src=twsrc%5Etfw”>@TheJusticeDept</a> AG Barr: Whenever you leave, you may want to consider a career at a PR firm, since that job does not require impartiality or taking an oath to the Constitution.<br><br>But as AG, you need to act in the public’s interest instead of being a Trump stooge. <a href=”https://t.co/vRez8eSxF6″>https://t.co/vRez8eSxF6</a>

Ohio congressman Jim Jordan, one of the most ardent Republican proponents of investigating elements of the FBI and Justice Department for supposed anti-Trump bias, trumpeted the Barr conclusions.

No collusion! No obstruction! <br><br>Complete cooperation from the President. No executive privilege asserted.

Overall, Mueller brought charges against 34 people — including six Trump aides and advisers — and revealed a sophisticated, wide-ranging Russian effort to influence the 2016 presidential election. Twenty-five of those charged were Russians accused either in the hacking of Democratic email accounts or of a hidden but powerful social media effort to spread disinformation online.

Evidence supports the inference that Trump intended for Paul Manafort, his former campaign chairman, to believe that he could get a pardon, according to Mueller’s report.

Manafort in January also told his deputy, Rick Gates, who pleaded guilty in a case related to the Mueller investigation, that Trump’s personal counsel had told him they were “going to take care of us,” according to Mueller’s report. 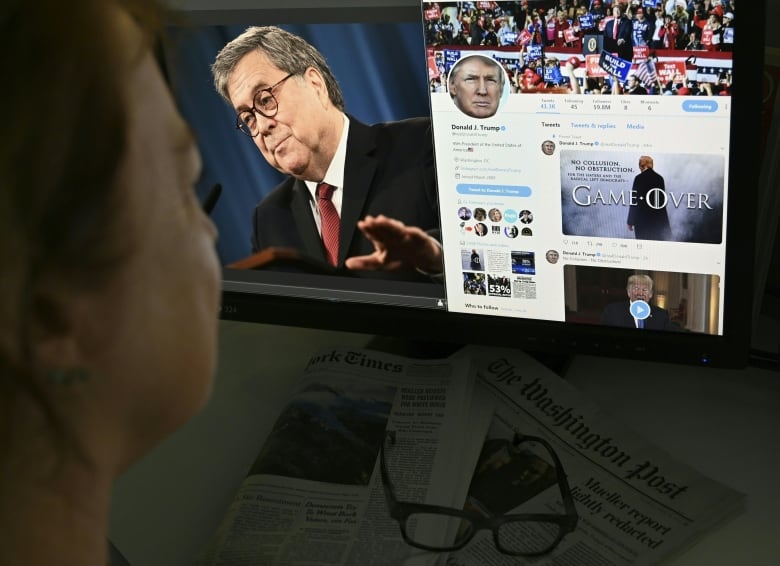 A photo illustration shows an editor looking at a photograph of Barr, left, speaking about the release of the redacted version of the Mueller report, juxtaposed with Trump’s ‘Game Over’ tweet. (Eva Hambach/AFP/Getty Images)

Barr was accompanied at the news conference by Rosenstein, who oversaw the investigation after Mueller’s appointment in May 2017 just a few weeks after he joined the Justice Department. The decision came shortly after Trump fired then-FBI director James Comey less than halfway into this 10-year term.

Trump, supported by a letter written by Rosenstein, claimed the firing was a result of the FBI’s handling of an investigation into Clinton’s use of private servers while secretary of state, but days later Trump admitted “this Russia thing” was a primary driver of the decision.

Mueller said there was “substantial evidence” that Trump fired Comey due to his “unwillingness to publicly state that the president was not personally under investigation.”