Maybe the timing is right for the Carolina Hurricanes.

The team that knocked out the defending Stanley Cup champions in the playoffs has a decent track record since 2013. The Chicago Blackhawks defeated the 2011-12 winners in the Los Angeles Kings in the 2013 West final and then went on to win the championship.

The Kings returned the favour to eliminate Chicago in a conference final rematch the following spring. Last year, the Washington Capitals took care of the defending-champion Pittsburgh Penguins in the second round and then outlasted the competition to win the Stanley Cup.

The Hurricanes defeated the Capitals in the first round this spring, and here they are in the East final. Could Don Cherry’s “bunch of jerks” continue this trend? Or will it be the Boston Bruins, St. Louis Blues or San Jose Sharks?

Here is a glance at the conference-final matchups in the East and West:

The skinny: The Bruins and Hurricanes meet for the fifth time in the playoffs and third time since the old Whalers franchise moved from Hartford down to Carolina in 1997. The Bruins hold a 3-1 edge.

The Hurricanes had a throwback night and wore Whalers sweaters in their win against Boston at home on Dec. 23. Both clubs enter the East final on a roll. The Hurricanes, off since May 3, have won six in a row. Boston has a three-game win streak.

A key to the Bruins’ win streak has been the play of their top offensive players: Patrice Bergeron, Brad Marchand, David Pastrnak and David Krejci. This foursome accounted for eight of the Bruins 11 goals in their last three games against the Columbus Blue Jackets.

Carolina’s young defence passed its first-round test against Alex Ovechkin, followed by a sweep against Mathew Barzal and the New York Islanders.

Look for rookie coach Rod Brind’Amour’s side to use its top two defensive pairings of Dougie Hamilton-Jaccob Slavin and Brett Pesce-Justin Faulk against the Bergeron and Krejci units.

Carolina could get goalie Petr Mrazek (lower body) back from injury and Micheal Ferland (upper body) for the series opener. Mrazek was injured in Game 2 of the Islanders series. Ferland hasn’t played since Game 3 of the Capitals series.

Bruins goalie Tuukka Rask found his groove in the second round. He leads all remaining goalies who have played five or more games in save percentage at .938. Bruins defenceman Charlie McAvoy will miss the series opener due to a one-game suspension for a hit to the head on Columbus forward Josh Anderson.

Interesting to note that the Hurricanes AHL affiliate, the Charlotte Checkers, also have advanced to the conference finals.

Prediction: Bruins in six. Boston will roll if its big shooters up front continue to play the way they finished their six-game series against Columbus. 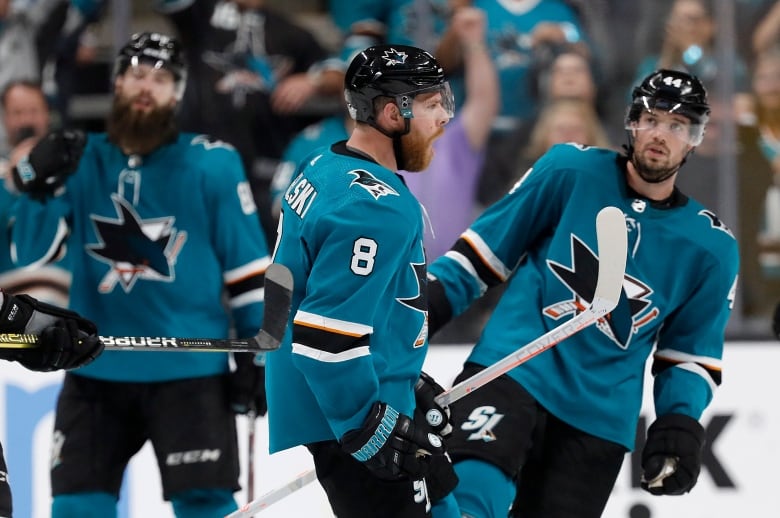 Centre Joe Pavelski (8) was a key figure in the Sharks’ Game 7 victory against the Colorado Avalanche. (Josie Lepe/Associated Press)

The skinny: The last time the Blues advanced to the West final was in 2016 when the Sharks ousted St. Louis in six games.

This time, the Blues have a much different and younger roster. They received massive contributions from a pair of rookies in forward Robert Thomas and goalie Jordan Binnington in the second round against the Dallas Stars.

The 19-year-old Thomas checked in with two assists in the Blues’ Game 7 clincher to become just the second teenager in NHL history, and first in 76 years, to set up a series-clinching overtime goal. Bep Guidolin was 17 when he assisted on Boston teammate Ab DeMarco’s overtime winner in Game 5 to eliminate the Montreal Canadiens and send the Bruins to the 1942-43 final.

The Sharks welcomed Joe Pavelski back to action after he missed the first six games of the second round with a head injury. Pavelski registered a goal and an assist in San Jose’s 3-2 win in Game 7 against the Colorado Avalanche on Wednesday.

The Blues will want to avoid a Game 7 against the Sharks because San Jose head coach Peter DeBoer is now 4-0 in Game 7s. He’s only the second coach in NHL history to win his first four Game 7s, matching Tommy Ivan, who went 4-0 with the Detroit Red Wings in the late 1940s and early 1950s.

This is Joe Thornton’s fourth trip to the conference finals. He’s trying to become the third NHLer to win the Stanley Cup after playing in more than 1,500 regular-season games. Ray Bourque turned the trick with Colorado in 2001. Dave Andreychuk won with Tampa Bay in 2004.

Prediction: Sharks in seven. The possibility of Thornton playing against his old team, the Bruins, in the Stanley Cup final would be quite a story.