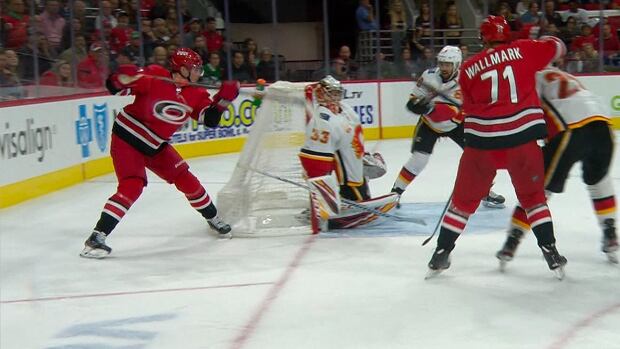 Johnny Gaudreau stood on the Calgary Flames bench in a state of shock after Andrei Svechnikov scored the first lacrosse goal in NHL history against David Rittich.

It was Oct. 29, and the left-shooting Svechnikov had cradled the puck on the blade of his stick, wrapped around the right side of the Calgary net, and whipped it through the tiny gap between the post, the cross bar and Rittich’s head.

Sure, Gaudreau hoped the goal would be waved off because of a high stick. And sure, he bemoaned the fact that Svechnikov pulled off the seemingly impossible in a game Calgary would go onto lose 2-1.

But at the same time, he couldn’t help but realize he was witnessing the start of something the NHL had never before seen.

“That’s a very hard thing to do,” Gaudreau said with admiration. “When you try it in summer or practice — even without a goalie — it’s tough to do. So to see him pull it off in the NHL, and against an NHL goaltender, it’s pretty cool to see.

WATCH | The evolution of the lacrosse goal:

We first saw it done by Mike Legg in 1996 at the University of Michigan. It took 24 years to be done in the NHL, but now the lacrosse goal has happened three times this season. How’d the unique move reach hockey’s highest level? 2:43

“We were just in shock and awe when that happened. Not many guys can pull that off. It’s fun to watch.”

Fun to watch for forwards, perhaps. But for goalies — and the defencemen paid to protect them — the lacrosse goal is a problem to be solved.

It’s a new threat to consider when certain players are parked in the area known as Wayne Gretzky’s office behind the net.

“It’s tough,” says St. Louis Blues netminder Jordan Binnington. “It’s a new play, and I think it’s kind of fun for coaches to find a way to adapt and for goalies to figure out a new way to stop. You just use your hockey sense and trust your reads to try and handle it.”

In truth, the lacrosse goal is nothing new. In the 1996 NCAA West Regional semifinal, Michigan forward Mike Legg shocked the hockey world when he scooped the puck and whipped it behind Minnesota goalie Steve Debus.

Legg’s stick on the play ended up residing for a time in the Hockey Hall of Fame for its part in what is simply known as “The Michigan.”

Flash forward 26 years. Svechnikov scored the first NHL lacrosse goal on Oct. 29. He repeated the feat on Dec. 17 against Connor Hellebuyck and the Winnipeg Jets.

On Jan. 14, Nashville’s Filip Forsberg proved the lacrosse goal is not a one-man phenomenon, lifting the puck on his blade and shovelling it under the glove of Edmonton netminder Mike Smith.

“The young kids are super skilled coming up now,” says Vancouver goalie Jacob Markstrom. “With social media and YouTube, they learn new tricks and all that stuff is going to be more creative.

“Players are getting more creative and more confident to pull it off in games. It’s obviously fun for the fans.”

The lacrosse goal is clearly fun, but debate rages around the actual legality of the play — especially considering Rittich took a stick through the face mask on the Svechnikov marker.

Stick must be below shoulders, crossbar

Under the current rules, a lacrosse goal is legal as long as the stick of the shooter is below the shoulders and the crossbar. As for the safety issue, “accidental contact” on a high stick is permitted “if the act is committed as a normal windup or follow through of a shooting motion.”

“I really think it’s just the risk you have to take playing the position,” says Calgary goalie Cam Talbot. “I know more guys are trying it now they’ve seen it done. It’s not going to change the way I play on my post or anything like that.

“They’re exciting goals. If you’re skilled enough to pull that off, all the power to you.”

Talbot is also relying on his defencemen to read the play in real time and, if possible, hack the would-be attacker’s stick before the puck is launched.

Option or not, Vancouver goalie Thatcher Demko isn’t about to reinvent his playing style in the name of preventing lacrosse goals.

“It’s kind of one of those in-game reads where whatever you’re seeing might help you stop the puck,” Demko says. “You just do it, whether it’s throwing your head or maybe using your opposite hand and knock it down. It’s just a quick read.

“I don’t think it’s a thing where you need to change your system of play. You have to have some awareness for it, like ‘oh this guy has a little bit more time than normal, what are his options?’ That kind of thing, but you’re not going to change anything really.”