The city of Delhi may have a knack for consistently electing the party that ends up ruling India, but election day here is as complicated as the country itself, with millions of eligible voters, thousands of armed police — and a ban on the sale of alcohol.

More than 100 million are going to the polls today in the penultimate voting day — the sixth of seven voting phases held over nearly six weeks to choose members of the Lok Sabha, the lower house of India’s parliament.

Putting on such an exercise in democracy is a daunting, though well-practised, feat.

The national vote is conducted in phases to allow the limited number of security forces to be rotated throughout the country as each region votes in turn. An alcohol ban is also in phases, brought in to voting regions to prevent political parties from using booze to bribe voters. 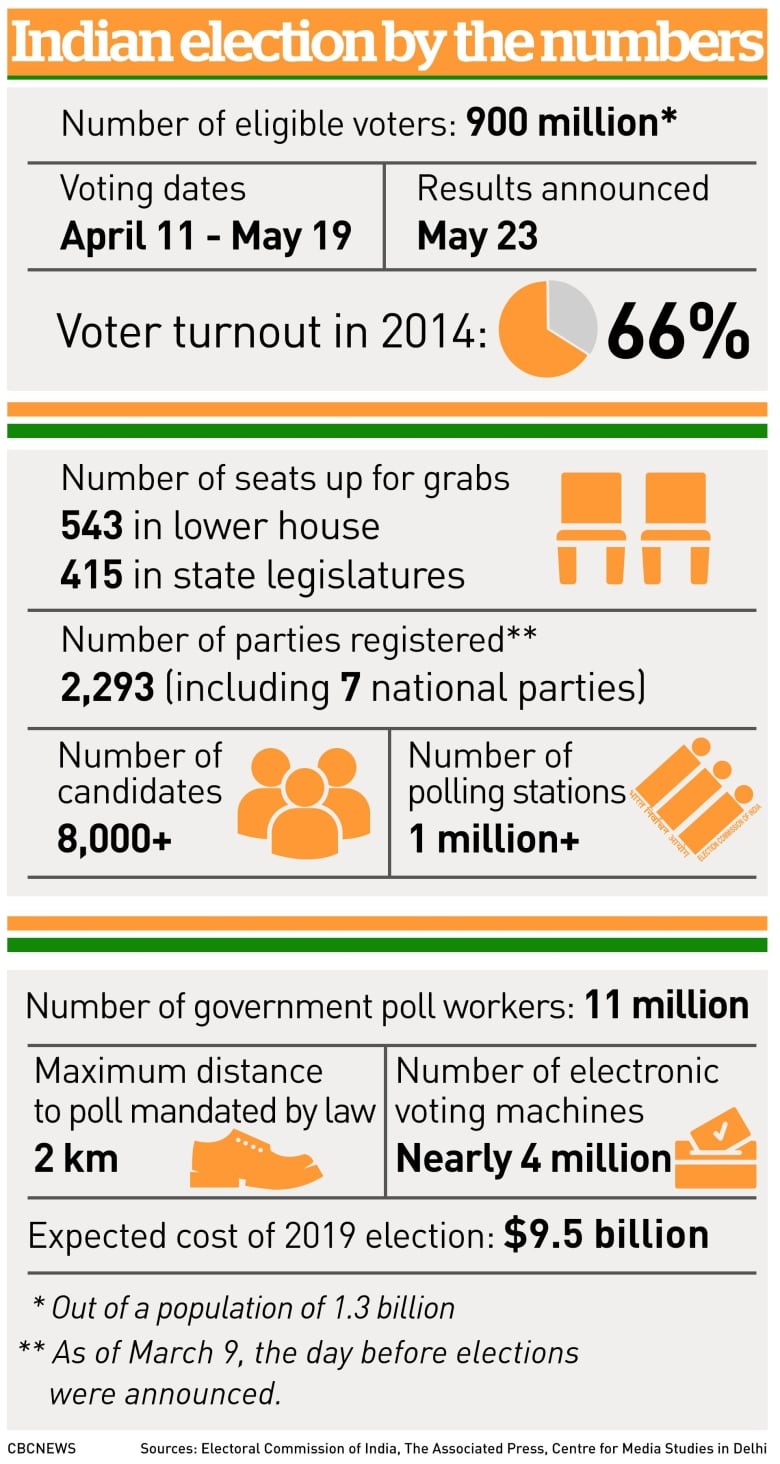 More than two million electronic voting machines are required to accommodate large numbers of voters in a total of one million polling stations.

Some of those must be brought to the remotest parts of India: requiring election workers to use elephants, boats, trains or even helicopters — whatever it takes — to get there and set up, according to S. Y. Quraishi, former chief of Election Commission of India and author of An Undocumented Wonder: The Great Indian Election. 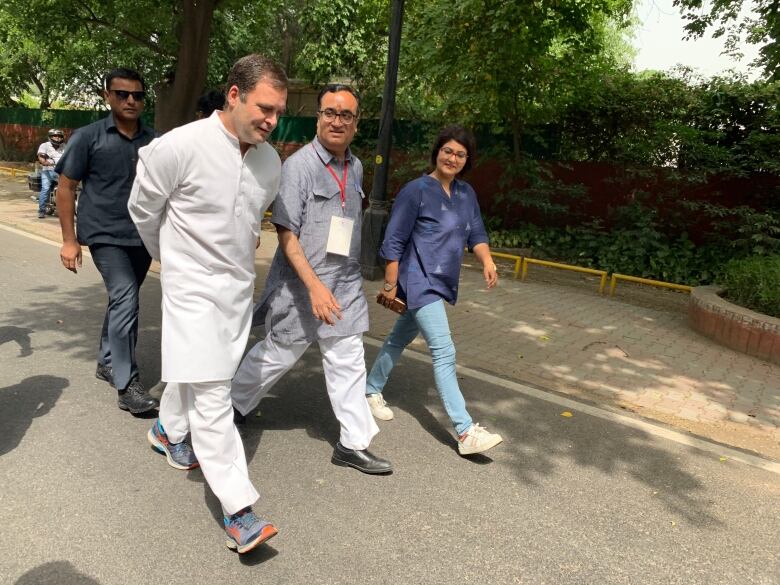 Congress party leader Rahul Gandhi, left, had adopted a rallying cry of ‘chowkidar chor hai,’ or ‘the watchman is a thief.’ Prime Minister Narendra Modi has been referring to himself as the watchman, as in, someone who is looking out for voters’ well-being. (Nahlah Ayed/CBC)

“The logistics are mind-boggling,” Quraishi said in an interview with CBC News.

In all, 12 million civil servants are enlisted to leave their regular jobs and ensure the election runs smoothly.

“They are all government servants, because we don’t trust anybody else. Their neutrality has to be ensured,” he says.

The turnout in elections has steadily increased over the years, he added, thanks partly to education campaigns. 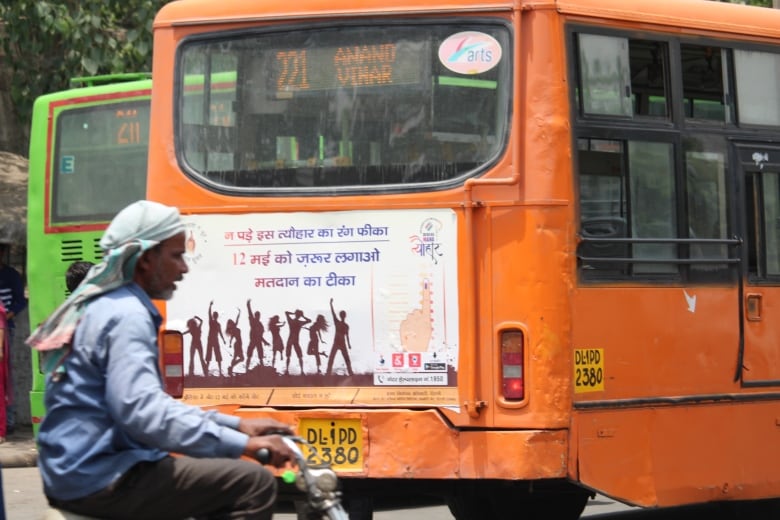 The Indian Election Commission has been running its own campaign on public buses and in newspapers, urging people to get out and vote. Turnout in the first five phases averaged 67 per cent, slightly higher than the turnout for the 2014 elections that brought Narendra Modi to power. (Stephanie Jenzer/CBC)

He told the story of a politician in Rajasthan who had lost an election by one vote. The man’s wife and daughter had not voted, he said.

The takeaway lessons, he said, are that “every vote counts.” And “on the day of poll, the most important temple is the polling station, you know?”

The economy and corruption

Adding to the complexity of India’s election is that the issues for voters vary wildly from state to gargantuan state — even from neighbourhood to neighbourhood.

“India is a federal country with a very large number of states, and the political arena within each of these states is very different,” says Sudha Pai, a political scientist and retired professor of political studies at Jawaharlal Nehru University.

In a neighbourhood in the city of Gurgaon, on the outskirts of Delhi, the economy is a concern, but so is corruption.

“It has deep roots in our economy and I think that’s one thing we really need to change,” said Namrata Yadav, 32. “Step by step. Baby steps.”

Across the national capital territory, in a northeast Delhi neighbourhood where open sewers still run through some of the narrow lanes, the concerns were more basic.

“The main thing is helping the poor sections of the society,” said Shiva Kaushik, a 21-year-old law student who lives there. He added that free education was also key to lift up those living in poverty.

Despite its diversity, the national capital territory of Delhi reportedly has a habit of backing the party that ends up in government. In the last election, in 2014, all seven of Delhi’s seats went to the BJP, Narendra Modi’s Bharatiya Janata Party, which won in a landslide.

This time in Delhi, a three-way contest for the seven available seats made for a fevered and at times acerbic campaign.

East Delhi’s sprawling “arrival city,” home to tens of thousands of migrants who come from rural areas and live in an unauthorized settlement, is one of the poorest in the region. Here they need a lot of everything — better education, better health care, more reliable electricity water and functioning sewers. 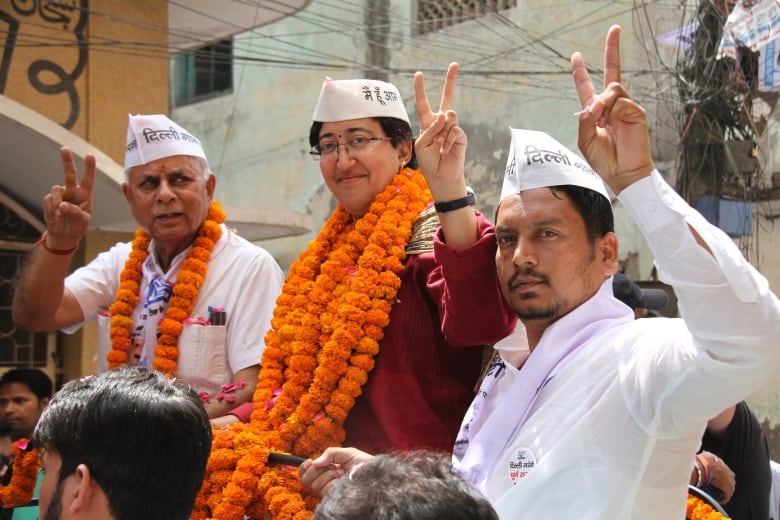 A politician, educator and activist who goes by the name Atishi, centre, took part in a roving election campaign on an auto ricksaw in Delhi last Thursday. She is running to represent East Delhi for the AAP, or Aam Aadmi (Common Man) Party. (Nahlah Ayed/CBC)

As the campaign period wound down last week, Atishi Marlena, a candidate for the Aam Aadmi party, spent hours riding on top of an auto rickshaw for a roving rally in the poorer alleys of East Delhi.

“We are trying to sell an equal India,” she said during a brief stop at a Hindu temple. India should offer development “not just for 20 per cent of the people but for every citizen.”

The economy and jobs are high on the list of issues that cross state lines.

Critics like Gandhi say Modi and his nationalist BJP party have divided the country along religious lines, turning against minority religions, especially Islam, in the constitutionally secular country.

Modi confident of a win

Many see this vote as a referendum on Modi’s entire record for the past five years. Some among opposition parties say they believe they could form coalitions that could allow them to wrest power from the sitting prime minister.

But in an interview with a local network, Modi predicted his party “will win with more seats than before.”

“The more they abuse us, the more the lotus will bloom,” he added.

It is a big decision in a gigantic democratic exercise. And yet the results will be tabulated and announced within just a few hours on May 23. 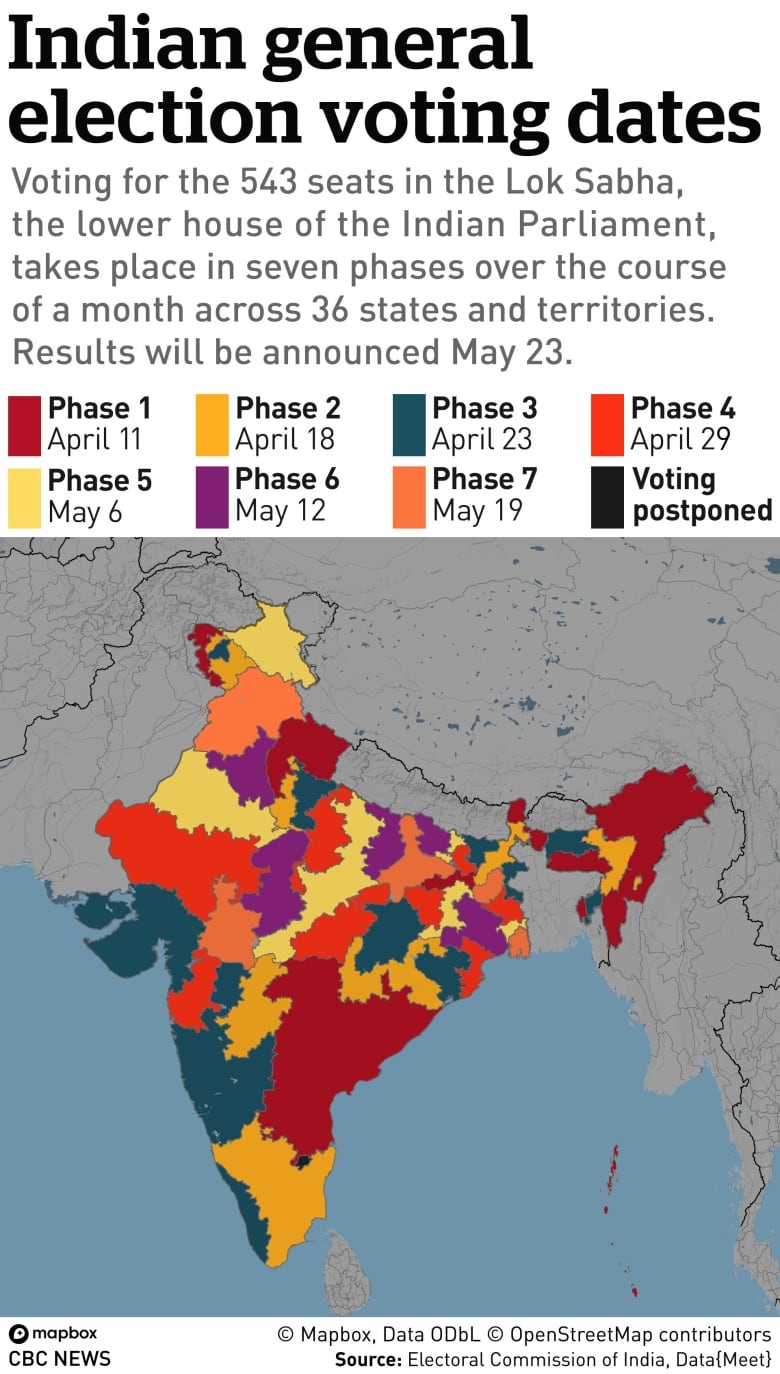