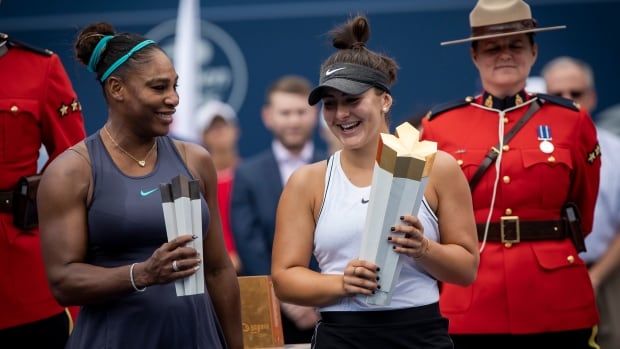 Imagine that moment for Bianca Andreescu.

There was the rising Canadian tennis star, 19-years-old, entering Centre Court at the Aviva Centre preparing to play in the biggest match of her life against one of the best-ever tennis players in Serena Williams.

To add to the storybook stuff, Andreescu grew up not far from the stadium in Mississauga, Ont.

Williams, 37, is a tennis juggernaut who was winning titles before Andreescu was even born. In fact, Williams turned professional five years before the birth of Andreescu.

A capacity crowd, boisterous and energized at the potential of what they were about to witness, settled into their seats as the sun cascaded down on the court.

And then it all ended abruptly – Williams retiring from the match due to injury just four games into the championship.

An umpire immediately went over to Andreescu after Williams had informed officials she wouldn’t be able to continue. Andreescu jumped up from her side of the court and raced over to Williams.

Bianca Andreescu and Serena Williams shared an emotional embrace after Williams was forced to retire from the Rogers Cup final due to injury. Andreescu is the first Canadian woman to win the Rogers Cup since Faye Urban in 1969. 2:14

She hugged Williams, one of her tennis idols, comforting the tennis great in what was obviously a painful and difficult moment.

“Are you ok? What happened?” Andreescu asked, her care and concern so genuine.

Williams was still sitting in her courtside chair — Andreescu then crouched down, the two sharing a moment.

“I’ve been through so many injuries already. This sucks,” Andreescu said. “I know everything about you.”

Post-match magic on the court

It was a jarring and shocking end to a match so many were anticipating. For nearly 20 minutes after Williams retired, the majority of spectators in the stadium stood, speechless, trying to wrap their minds around what just happened.

Rogers Cup organizers scrambled to throw together the post-game ceremony.

Williams was the first to address the crowd.

The crowd cheered as Williams continued.

“Bianca, you’re a great sportsperson, woman. And thanks to my team. It’s been a tough year, but we’ll keep going.”

Andreescu then took the microphone at centre court to soak up her championship moment – once again showing poise and grace in the big moment, beginning with acknowledging her competitor.

“Serena you made me cry. I know how hard it is to pull out of a tournament due to injury. It’s not easy,” Andreescu began.

The two showered each other with respect.

In her post-match press conference Williams had nothing but praise for Andreescu.

“I’m officially a fan,” she said. “She’s an old soul. She’s only 19. She definitely doesn’t seem like a 19-year-old. Her words on the court. Her game. Her attitude. Her actions.”

Serena Williams spoke to the media after having to retire from the Rogers Cup final due to injury. 5:50

Williams called today’s short-lived match with Andreescu the best part of the Rogers Cup, pointing directly to how the young tennis player handled her injury.

“I was really sad and she made me feel a lot better,” Williams said.

It took just 19 minutes for the 19-year-old to become the first Canadian in 50 years to capture the Rogers Cup. “Before the match I was really, really nervous. I mean, I’m playing Serena,” Andreescu said.

“Stepping on the court I wanted to show her what I’m made of. I think I did that in the first four games.”

The 19-year-old Andreescu has now won 17 consecutive matches, not counting when she has had to retire from matches due to injury herself. “It’s a dream come true. This week has not been easy. I have had many, many tough matches. The last two months have not been easy. But I’ve kept telling myself to not give up.”

Andreescu has victories over seven of the top 10 players in the world this season. Her world ranking will rise from 27th to 14th on Monday. Her previous high was 22.

Bianca Andreescu addressed the media following her win over Serena Williams in the finals of the Rogers Cup in Toronto. 13:39

“Hopefully this win can give inspiration to many other Canadians and young athletes. If I can do it, if Serena can do it, anyone can do it if you just believe in yourself,” Andreescu said.

“This is just the beginning.”