The Ebola outbreak in Congo is not an international health emergency, but is a situation of “deep concern,” the World Health Organization said Friday.

The decision follows a meeting of experts at WHO about whether the deteriorating situation in Congo is a “serious, unusual or unexpected” threat to other countries that requires “immediate international action.”

The committee decided “almost unanimously” that the outbreak doesn’t constitute an emergency, Prof. Robert Steffen, chair of the emergency committee and department of epidemiology and prevention of infectious diseases at the University of Zurich, told reporters.

Steffen said they advised “redoubling efforts” to: detect Ebola cases as soon as possible, follow all contacts of those infected, and ensure vaccination of contacts.

The panel expressed great concern about the number of cases increasing in some regions of the outbreak, but noted it hasn’t spread internationally.

“It does not mean we can lean back and relax,” Steffen said.

Tedros said the outbreak response needs another $ 104 million US to help stop transmission of the virus. He urged countries to donate, noting unexpected costs have come up, such as the burning down of after-health-care facilities.

Steffen said the committee considered how declaring an international public health emergency of international concern (PHEIC) “should not just be a money-making decision.”

Rather, by definition under international health regulations, the emergency declaration should be used to provide early warning of an imminent threat so countries can prepare, said WHO’s Dr. Mike Ryan. It is not an instrument for humanitarian response.

The Ebola outbreak in Congo announced on Aug. 1 has become the second-deadliest in history, behind the West African one from 2014 to 2016 that killed more than 11,300 people.

Ebola cases have spiked in recent weeks, and officials are increasingly losing track of where the virus is spreading.

Regardless of the official status of outbreak, “it is clear that the outbreak is not under control and, therefore, we need a better collective effort,” Doctors Without Borders said in a statement in response to WHO’s decision. 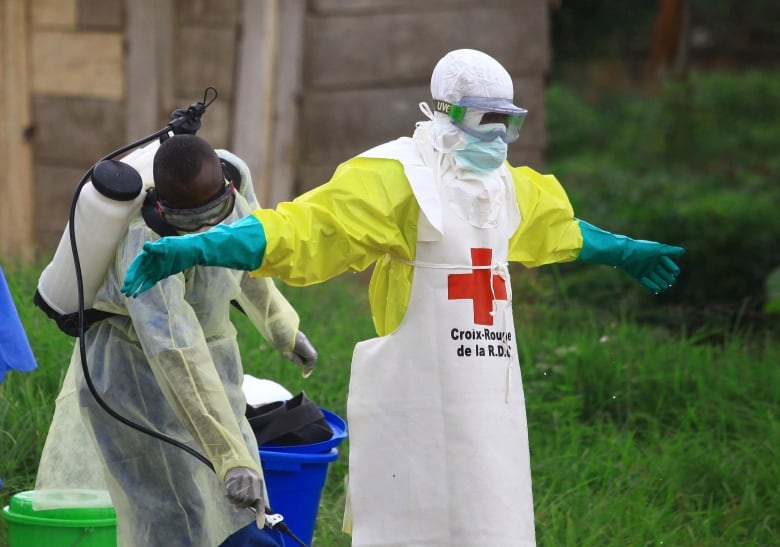 A health worker sprays disinfectant on his colleague after working at an Ebola treatment centre in Beni, eastern Congo, on Sept. 9, 2018. (Al-hadji Kudra Maliro/Associated Press)

Canadian Trish Newport, Doctors Without Borders’ representative in Goma, a major crossroads city close to the outbreak, said ahead of the WHO announcement that declaring a global emergency wouldn’t necessarily help stop the epidemic.

Doctors Without Borders is calling for patients to be treated in existing health centres rather than Ebola-specific clinics: “It’s very clear that people do not like or trust the Ebola centres and they are not coming to be treated.”

When people infected with Ebola die in the community rather than in a health centre, it is easier for the virus to spread.

Tariq Riebl, who is based in a current Ebola hot spot, Butembo, for the International Rescue Committee, said a major obstacle to stopping the outbreak is that officials are simply unaware of how many Ebola cases there are.

“We’re discovering people when it’s way too late,” he said, noting many bodies were buried in secret and never reported to authorities.

“Given the average number of cases we’re seeing now, this is not going to be over for at least another six months or more.”

WHO has said the risk of the virus spreading to neighbouring countries is “very high,” while the risk of global spread is low.