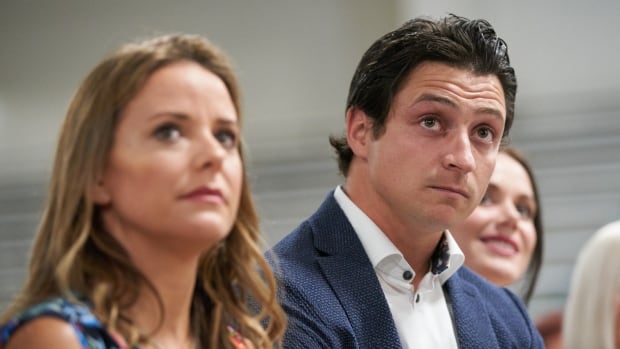 Scott Moir says he is in Florida during the pandemic to support his fiancee, and not because he’s on “vacation.”

Moir, 32, took to social media on Thursday because he felt he need to defend the couple from online attacks.

The Canadian figure skater posted a video on Instagram and Twitter on Thursday, explaining that he and fiancee Jackie Mascarin are in Tampa, Fla., because Mascarin works as a physician’s assistant in the respiratory unit of a local hospital.

Moir, of London, Ont., also said the pair were planning to return to their home in Ilderton, Ont., next week, though not via plane.

“The people who are stepping foot in the hospital, front-line workers, first responders, they’re heroes in a time like this and they’re putting their families at risk for the good of the society,” Moir said. “And I feel like as a life partner I should stay here in Tampa and support [Mascarin].”

Moir appears to have posted the video over claims he went to a resort outside of Canada in mid-March, after quarantine guidelines intended to help stop the spread of COVID-19 were put into place.

Moir was supposed to participate in the opening act of the figure skating world championships in Montreal, one of the first major events cancelled over concerns about coronavirus. The event was scheduled to begin Mar. 16.

“There’s people saying that I’ve been back and forth and that I went on vacation after worlds and fact of the matter is we’re in Tampa and we have been in Tampa and we’re in isolation and we’re following the guidelines,” Moir said.

Some others are now claiming it is irresponsible for him to return to Canada, citing those same guidelines and saying he could put others at risk by travelling across borders.

In the video, Moir said he and Mascarin would have “an incredible quarantine action plan” upon their return to Ontario.

“We are Canadians and we wanna help and that’s the whole reason Jackie wanted to be a physician’s assistant — she wanted to help people in need — so we decided that we would stay down here for a couple months and now that that’s done we’re headed home next week.”