This time, as the pre-dawn skies over Syria streaked with U.S.-launched Tomahawk cruise missiles, it was a multilateral effort.

The U.S.-European operation was broader than last year’s, hitting three targets rather than one Syrian air base. It was bolder, too, striking near the more densely populated capital of Damascus, after the regime unleashed a suspected chemical weapons attack on its citizens last weekend.

And, as U.S. President Donald Trump said in an address on Friday evening, it was to be part of a “sustained response” strategy.

Trump says U.S., allies will launch “precision strikes” until the Syrian government stops the use of chemical weapons.7:42

So much for Trump’s vow of a “sustained response,” said Behnam Ben Taleblu, a foreign-policy and security analyst with the Foundation for Defence of Democracies in Washington.

Put another way, experts say it’s not a protracted war the Trump administration is waging — it was a 17-minute military “operation” to deter illegal chemical warfare. And now it’s over.

Even so, the conflicting descriptions of the plan by Mattis and Trump point to another concern: that there may not be any long-term strategy for Syria.

This image shows one of four British Royal Air Force Tornados that flew in the U.S.-led operation to take out Syrian installations thought responsible for a recent chemical weapons attack in Syria. The planes took off from an RAF base in Cyprus.(Cpl. L. Matthews/British ministry of defence/EPA-EFE)

Instead, Taleblu said, the repeated destruction of Assad’s chemical weapons is like “continuously slicing up bits of the problem, without dealing with the actual problem itself.”

Twice as many missiles as last year

The U.S.-led precision strikes on Syria, conducted around 4 a.m. local time on Saturday with British and French allies, doubled the size of last year’s launching of 59 Tomahawk cruise missiles at the Shayrat air base. The most recent missile strikes targeted a scientific research centre for producing weapons, a part of a military command post, and a facility used for making the nerve agent sarin gas.

“Today, the nations of Britain, France and the United States of America have marshalled their righteous power against barbarism and brutality,” Trump said. Beyond his tough words, though, was a restrained order that critics say lacks a master plan.

“The longer the Trump administration goes without a justification for what we’re doing, there’s a grave potential for ineffectual use of military force,” said national security analyst Jim Arkedis, president of the foreign-policy advocacy group Indispensible.

The punitive action is so tailored toward the chemical-weapons program that it arguably does nothing to weaken Assad’s regime long-term or move toward bringing the seven-year Syrian conflict to a close, he said.

The longer the Trump administration goes without a justification for what we’re doing, there’s a grave potential for ineffectual use of military force.–  National security analyst Jim  Arkedis

Arkedis said Trump boxed himself in with his impulsive tweeting, in which he signalled a desire to withdraw U.S. troops from Syria. Critics believe the pronouncement emboldened Assad to launch the chemical attack.

Further military action “is a waste,” Arkedis fears, unless Trump can clearly articulate a policy outlining the U.S. future in Syria.

Assad ‘will test us again’

“If the Trump administration sustains attacks every time against Syria, every time the Syrian government uses chemical weapons, that’s a good step in restoring that international norm,” he said.

But Assad’s forces “will test us again,” Ford predicted, by re-upping their chemical weapons to make up for their massively depleted troop numbers that have dwindled over the course of the prolonged civil war.

The problem is limited strikes don’t address the underlying conflict, said Brett Bruen, who served as the White House director of global engagement from 2013 to 2015.

Damascus skies were lit up with anti-aircraft fire as the U.S. launched airstrikes against Syria, targeting different areas near the capital.(Hassan Ammar/Associated Press)

“Simply saying we’re going to act until Assad throws up a white flag, that’s going to take us down the same path we’ve repeatedly come up empty on before.”

The world need not look further than last year. The strike on Syria’s Shayrat air field only impeded the regime’s capabilities for a few hours. Within a day, Syrian warplanes were again taking off from the air base for bombing missions on the town of Khan Shaykhun, which had been previously targeted by large-scale civilian poisonings by toxic gas.

Opportunity missed to call out Putin

A clear call-out by Trump on Friday for Russian President Vladimir Putin to demand Russian troops leave Syria and stop supporting Assad would have been a start, he said.

“This is a missed opportunity that Trump did not seize the moment.”

Mattis and Trump made sure to specifically mention they were not targeting foreign interests, but were deliberately going after the Assad regime’s chemical-weapons capabilities. Apparently left untouched, however, were delivery mechanisms for those chemical weapons, which might include conventional weapons such as rockets, missiles, artillery shells and helicopters.

Syrians wave Russian and Syrian flags during a protest against U.S.-led air strikes in Damascus, Syria on Saturday morning.(Omar Sanadiki/Reuters)

The danger is how limited the message is if the operation focuses solely on the West’s abhorrence for Syria’s use of chemical warfare, said Jon Schanzer, a Middle East and counterterrorism expert who worked as an analyst for the U.S. department of the treasury.

No message against barrel bombs

The message, Schanzer said, is: “Don’t launch chemical weapons.” Still, he said that does little to dissuade Assad from resorting to barrel bombs and continuing to “slaughter” civilians, so long as he “doesn’t violate international norms.”

It at least became clear from the nature of the co-ordinated attack, why a decision that Trump promised on Monday to make within “24 to 48 hours” instead took four days.

British Prime Minister Theresa May, U.S. President Donald Trump and French President Emmanuel Macron were all on board with the strike.(AFP/Getty Images)

“They really needed to prepare for this one, with a three-country situation” involving French and British forces, said Henri Barkey, a Middle East expert and the Cohen Professor of International Relations at Pennsylvania’s Lehigh University.

While the coalition gives the nations diplomatic cover, it also reinforces suspicions neither France nor the U.K. are interested in a long-term conflict with the Syrians. A protracted conflict would risk escalation with the Russians as well as the Iranians backing Assad’s regime. Russia is also a major supplier of natural gas to the Europeans.

The missile strikes did not surprise Barkey. Trump had, after all, telegraphed days before that Assad would “pay” for using an internationally banned substance.

“So, they lived up to what they’ve been saying all along,” Barkey says. “Mind you, that still does nothing about the Syrian regime, which is still a mess, and Trump said this is not the end.”

U.S. Secretary of State Rex Tillerson cast the poisoning of an ex-spy in Britain as part of a “certain unleashing of activity” by Russia that the United States is struggling to understand.

He also warned that the poisoning would “certainly trigger a response.”

Tillerson, echoing the British government’s finger-pointing toward Moscow, said he didn’t yet know whether Russia’s government knew of the attack with a military-grade nerve agent, but that one way or another, “it came from Russia.” He said it was “almost beyond comprehension” why a state actor would deploy such a dangerous substance in a public place, where others could be exposed.

“I cannot understand why anyone would take such an action. But this is a substance that is known to us and does not exist widely,” Tillerson told reporters as he flew from Nigeria to Washington. “It is only in the hands of a very, very limited number of parties.”

British Prime Minister Theresa May said that Novichok, the nerve agent used against ex-spy Sergei Skripal and his daughter, was developed by the Soviet Union near the end of the Cold War.

Skripal, 66, was a Russian military intelligence officer before flipping to the British side in the 1990s, going to jail in Russia in 2006 and being freed in an exchange of spies in 2010. Moscow has dismissed the suggestion it was involved in his March 4 poisoning as “a circus show.”

Tillerson, who spoke Monday by phone with British Foreign Secretary Boris Johnson, said he’s grown “extremely concerned” about Russia, noting that he spent most of the first year of the Trump administration trying to solve problems and narrow differences with the Kremlin. He said that after a year of trying, “we didn’t get very far.

“Instead, what we’ve seen is a pivot on their part to be more aggressive,” Tillerson said. “And this is very, very concerning to me and others that there seems to be a certain unleashing of activity that we don’t fully understand what the objective behind that is.”

He said if the poisoning turned out to be the work of Russia’s government, “this is a pretty serious action.

“It certainly will trigger a response. I’ll leave it at that,” Tillerson said. 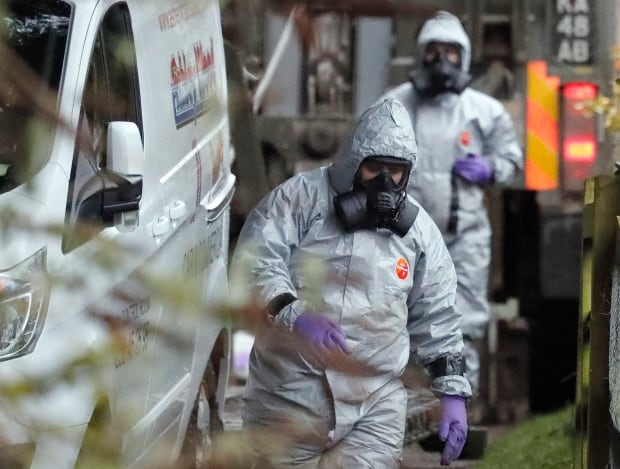 Military forces work on a van in Winterslow, England, Monday as investigations continue into the nerve-agent poisoning of Russian ex-spy Sergei Skripal and his daughter Yulia, in Salisbury, England. (Frank Augstein/Associated Press)

Tillerson, whose relationship with Russian President Vladimir Putin dates back to his days as Exxon Mobil’s CEO, has sought to work with Russia on narrow areas where the two countries could find common ground, such as a ceasefire in southwestern Syria that has largely held since last year.

But those efforts have had diminishing results. Tillerson’s efforts to persuade Moscow to stop propping up Syrian President Bashar al-Assad and to pull out of Crimea have yielded little to no progress.

At the same time, President Donald Trump’s critics regularly accuse his administration of failing to stand up to the Kremlin, especially over Russian interference in the 2016 presidential election.

Russia hawks in Congress are particularly miffed that the State Department so far has declined to use a new law letting the U.S. slap sanctions on foreign companies or governments that do business with Russia’s defence or intelligence sectors. Those powers took effect in January, but so far no one has been punished.