Cardi B is setting the record straight!

In case you missed it, the rapper’s husband, Offset, stormed the stage to ask for her forgiveness amid cheating rumors during her headlining Rolling Loud set over the weekend. While the onstage moment appeared awkward, users on social media started to call it a PR stunt after a video surfaced of Cardi’s publicist, Patientce Foster, seemingly in on it, as she was seen ushering Offset to the stage.

Here is backstage footage of Cardi B’s publicist Patience Foster leading Offset to the stage. Like I said, this whole "break up" is an orchestrated publicity stunt. So these media outlets can stop using this fake scenario to push their anti-Black "toxic masculinity" narrative pic.twitter.com/z8KLPs3eZl

However, as soon as Cardi got word of the rumors, she took to Instagram on Monday to stick up for Patientce in a series of NSFW posts.

“Fan or not, you talk about my publicist/friend you can eat a d**k PERIOD,” Cardi wrote in a message posted to her Instagram Stories, before going live.

“I don’t like people talking sh*t about my publicist, that’s like my sister,” she said. “Same way I would ride for my little sister, I’d ride for anyone that’s around me. Especially at this point in life where everyone wants to use me. I cherish my day ones and love them and it’s always gonna be like that.”

Still, Rolling Loud co-founder Tariq Cherif claims in a statement to the Los Angeles Times that Cardi’s management was aware of the stunt.

“We were told she was going to have a guest star during her set, that it was going to be [Offset’s rap trio] Migos, but we didn’t know anything about that stunt,” the statement read. “We’re getting blamed as if we conspired to do this, and I just want to make it clear that we did not.”

“Cardi’s management was in on it, it had nothing to do with the festival,” the statement continued. “The artist is in full control of the stage and they determine who gets on and off.”

So … Offset interrupted Cardi’s set at #RollingLoud with this. Sis did NOT look happy pic.twitter.com/wEsXSpnZyL

As ET previously reported, just a few songs into Cardi’s set at the Banc of California Stadium Grounds on Saturday night, a three-piece sign, made entirely of roses, was rolled onto the stage, which read: “Take me back Cardi.”

That’s when the Migos rapper appeared and told Cardi, “I just wanna tell you I’m sorry, babe. In person, in front of the world, I love you. Whatever I gotta do to show you, I will.”

Hear more on Cardi and Offset in the video below.

Offset Apologizes to Cardi B After Crashing Her Show

Offset Crashes Cardi B's Show to Beg For Her Back — Watch! 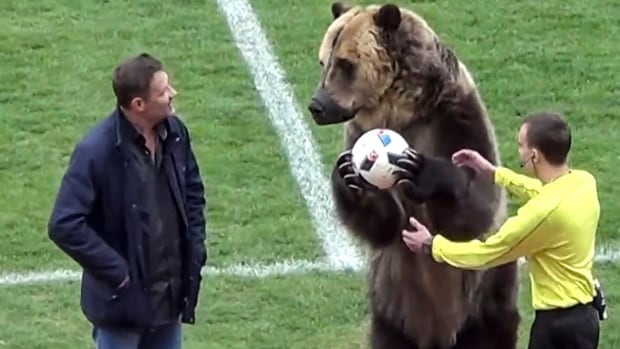 Animal rights groups have condemned the use of a bear that performed before a Russian soccer match.

The routine happened before a third division match Sunday in the southern city of Pyatigorsk. TV footage from the game showed the animal being led to the Mashuk-KMV Pyatigorsk club’s stadium, clapping at spectators. The bear, named Tima, also held the ball before handing it over to the referee.

The stadium’s announcer claimed that the bear will take part in the World Cup’s opening ceremony in Moscow in June, but soccer authorities haven’t confirmed that. The club’s manager says it was borrowed from a circus.

The New York-based World Animal Protection group condemned the stunt Monday, saying that it’s clear from the footage that “cruel training methods have been used” on the bear.

Rustam Dudov, manager of the Mashuk club which arranged for the bear to perform, told the Sport Express newspaper Monday that the bear was borrowed from a traveling circus which approached the club suggesting that the bear perform before the game. Dudov said the Russian Football Union approved the performance.

Prosecutor General Yuri Chaika’s report to the upper house of parliament says the suspected organizers envisaged engaging members of the radical soccer fan group T.O.Y.S. to disrupt World Cup events in the city of Samara on the Volga River.

Chaika’s report released by the Tass news agency on Tuesday didn’t elaborate on the actions the perpetrators planned to take.

The radical nationalist group was outlawed by a Russian court last year on charges of fomenting extremist sentiments.

Zazie Beetz is paying tribute to Joi “SJ” Harris, the stuntwoman who died on Monday while performing a motorcycle stunt on set of Deadpool 2 in Vancouver, Canada.

It is thought that Harris was the stunt double for Beetz, who is portraying the mutant Domino in the action film. Earlier that day, Beetz was seen on a black Ducati motorcycle shooting scenes.

“On Monday we tragically lost one of our own — Joi SJ Harris,” the actress wrote in a handwritten posted to Instagram on Wednesday night. “My heart has been breaking the past two days and I have been searching what to say or do.”

Beetz continued: “I know that what I feel is nothing compared to what her loved ones, friends + family, are feeling. My heart and my love goes out to her and them all. The cast and crew send peace, healing, and their deepest condolences.”

Deadpool 2 was Harris’ first job as a stunt driver. On her website, she promoted herself as “the first licensed African American women in U.S. history to actively compete in sanctioned motorcycle road racing events.”

Eyewitnesses told the Vancouver Sun that around 8 a.m. on Monday, Harris was filming the stunt when she lost control of her bike, and jumped a curb and crashed into Shaw Tower, across from Canada Place. The outlet also reported that Harris was treated by ambulance personnel but died at the scene.

In addition to Beetz, Ryan Reynolds also paid tribute to Harris in a heartfelt post on Twitter. “Today, we tragically lost a member of our crew while filming Deadpool [2],” wrote Reynolds, who’s reprising his role as Wade in the superhero sequel. “We’re heartbroken, shocked and devastated… but recognize nothing can come close to the grief and inexplicable pain her family and loved ones must feel in this moment.”

“My heart pours out to them, along with each and every person she touched in this world,” the 40-year-old actor added.