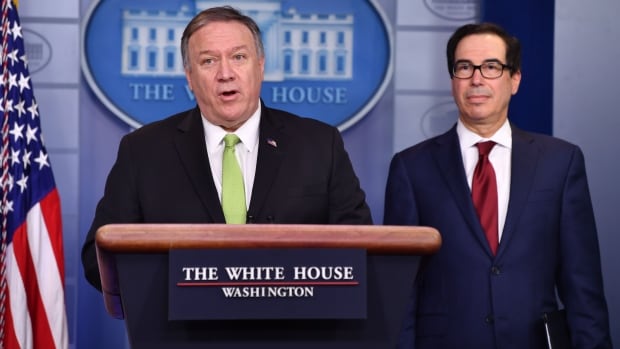 The Trump administration on Friday announced a new wave of sanctions on Iran following this week’s missile strikes by the Islamic Republic on U.S. bases in Iraq.

U.S. Secretary of State Mike Pompeo and Treasury Secretary Steven Mnuchin said the new sanctions will target eight senior Iranian officials involved in “destabilizing” activities in the Middle East as well as Tuesday’s missile strike, which came in retaliation for the U.S. killing of a senior Iranian general in a drone strike.

Mnuchin said President Donald Trump will issue an executive order imposing sanctions on anyone involved in the Iranian textile, construction, manufacturing or mining sectors. They will also impose separate sanctions against the steel and iron sectors.

“As a result of these actions, we will cut off billions of dollars of support to the Iranian regime,” the treasury secretary said.

The administration has already reinstated all of the U.S. sanctions that were eased under the 2015 nuclear deal, which has caused significant economic hardship in Iran and cut its oil exports to historic lows.

The U.S. provided details on new sanctions designed to force Iran to behave like a ‘normal’ nation 2:37

Iran this week launched the strikes in retaliation for the U.S. drone strike that killed Revolutionary Guard Gen. Qassem Soleimani, the country’s most powerful commander, in Baghdad last week. There were no reported casualties as a result of the missile strikes.

U.S. officials also said Friday that the U.S. military tried, but failed, to take out another senior Iranian commander on the same day an airstrike killed Soleimani.

The officials said a military airstrike targeted Abdul Reza Shahlai, a high-ranking commander in Iran’s Islamic Republican Guard Corps, but the mission was not successful. The officials spoke on condition of anonymity in order to discuss a classified mission.

The Pentagon declined to discuss the highly-classified operation.

“We have seen the report of a Jan. 2 airstrike in Yemen, which is long-understood as a safe space for terrorists and other adversaries to the United States. The Department of Defence does not discuss alleged operations in the region,” said Navy Cmdr. Rebecca Rebarich, a Pentagon spokesman.

Iranian commander ‘proud’ to be sanctioned

The new sanctions imposed on Iran are “symbolic,” a sanctioned commander of Iran’s elite Revolutionary Guards said on Friday.

“Imposing sanctions is symbolic for America and for me because this measure will have no economic impact and will not compensate for [Iran’s] missile barrage [on U.S. targets] and will not bring respect for Washington,” tweeted Mohsen Rezaie.

“It is symbolic for me… And I am proud to be sanctioned by America.”

In separate developments, Pompeo discussed the possibility of an expanded NATO presence in Iraq in a call with his Canadian counterpart, Foreign Minister François-Philippe Champagne, the U.S. State Department said on Friday.

“The secretary and foreign minister also spoke about the Iranian regime’s continued aggressive and destabilizing actions in the region and steps to contain it, specifically, the opportunity for an expanded NATO force in Iraq and appropriate burden sharing,” State Department spokesperson Morgan Ortagus said in a statement.