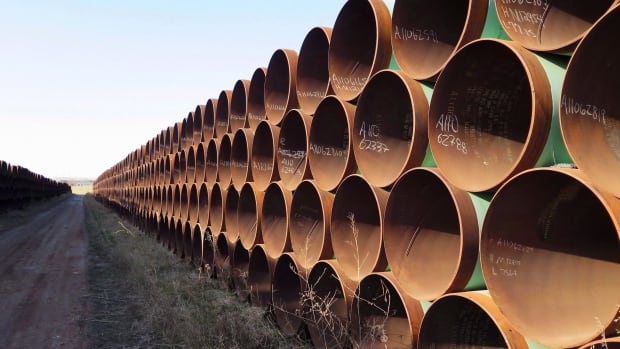 Joe Biden has criticized Canadian “tarsands” oil, doubling down on his promise to scrap the Keystone XL pipeline if he’s elected U.S. president in November.

The presumptive Democratic nominee made clear in an interview with CNBC that a statement from his campaign earlier this week reflects his position: He wants the pipeline stopped.

“I’ve been against Keystone from the beginning. It is tarsands that we don’t need — that in fact is very, very high pollutant,” Biden said Friday.

When pressed by an interviewer about the damage this pledge might do to the oil industry, Biden replied that he doesn’t want to shut down all projects immediately.

He brushed off, however, the importance of the Alberta-to-Texas pipeline to the U.S. industry.

“We’re gonna transition gradually to get to a clean economy,” Biden said.

“But the idea of shutting down Keystone, as if that is the thing that keeps the oil industry moving, is just not rational. It does not economically, nor, in my view, environmentally, make any sense.”

His remarks reaffirmed a statement released by his campaign earlier this week.

Biden’s promise to cancel the pipeline has caused some consternation across the border. In Alberta, taxpayers are investing $ 1.5 billion in the pipeline project.

Alberta Premier Jason Kenney this week said Biden would have a hard time explaining to Americans why he’d kill a part-finished project.

Construction recently began on the long-delayed project, which would carry oilsands crude into a system connected to refineries in the Gulf of Mexico.

The pipeline’s backers hope it might alleviate bottlenecks that have often plagued Alberta’s land-locked oil, and eventually carry roughly one-fifth of all the oil Canada exports to the U.S.

In Canada, the Trudeau Liberals’ opponents have urged them to use their well-documented connections to Biden’s inner circle to change the candidate’s mind.

Conservative Leader Andrew Scheer said the Liberal government should be lobbying their “friends in the Democratic party” on Keystone XL.

Prime Minister Justin Trudeau says he’s always supported the Keystone XL project and will work with the next U.S. administration to ensure it understands the project’s importance to Canada. Trudeau is responding to Democratic presidential candidate Joe Biden saying that he will cancel the project if he’s elected. 0:58

The Associated Press reports that a nearly two-kilometre section has been completed across the Alberta-Montana border. However, legal and logistical challenges risk further slowing the projected three-year construction.

The AP said site work has begun for labour camps near Baker, Mont., and Philip, S.D., but there is no date to occupy them.

The state of Montana expects plans from TC Energy, the Calgary-based company building the pipeline, on precautions to avoid spread of COVID-19 among workers, but has not received them yet.

In addition, a May 15 ruling from a Montana federal judge cancelled a key permit from the U.S. Army Corps of Engineers required to build the line across hundreds of streams, wetlands and other water bodies.

The pipeline debate was a major issue in U.S. politics several years ago. After years of delay, then-president Barack Obama cancelled a critical permit in 2015, a move President Donald Trump reversed in 2017.

Yet Biden’s announcement this week produced few headlines in the U.S. Even on Friday, other remarks by Biden drew far more attention.

They included him telling CNBC that businesses should pay higher taxes — he specifically mentioned Amazon.

But the comment that got the most attention, by far, was Biden telling an African American radio interviewer that people who consider voting for Trump “ain’t black.”

The Trump campaign called the remark disgusting and tweeted about it nearly two dozen times Friday morning. Biden’s campaign said the remark was made in jest.