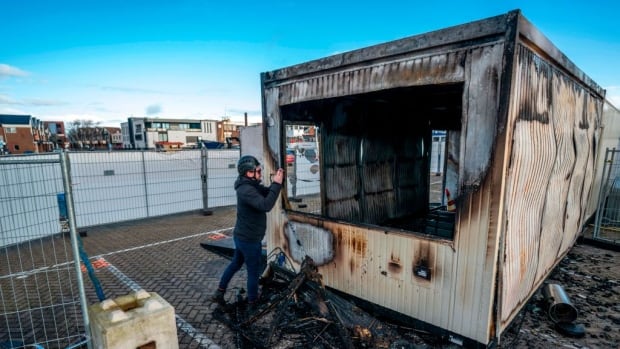 Rioting youths protesting on the first night of a Dutch curfew torched a coronavirus testing facility and threw fireworks at police in a Dutch fishing village.

Video from the village of Urk, 80 kilometres northeast of Amsterdam, showed youths breaking into the coronavirus testing facility near the village’s harbour before it was set ablaze.

The police and municipality issued a statement Sunday expressing their anger at rioting, “from throwing fireworks and stones to destroying police cars and with the torching of the test location as a deep point.”

“This is not only unacceptable, but also a slap in the face, especially for the local health authority staff who do all they can at the test centre to help people from Urk,” the local authorities said.

Police in Amsterdam also were bracing for another protest Sunday, sending officers to a square where demonstrators clashed with police a week ago.

Indian police fired tear gas and resorted to baton charges to disperse thousands of violent demonstrators who were torching vehicles in New Delhi on Sunday, as protests against a new citizenship law continued for a fifth straight day across the country.

The new law enacted on Dec. 11 has stirred protests across India, but the eastern part of the country, where resentment toward Bangladeshi immigrants has persisted for decades, has been among the worst hit. Violent demonstrations in the Indian capital have been ongoing since Friday.

Prime Minister Narendra Modi’s government says the new law will save religious minorities such as Hindus and Christians from persecution in neighbouring Bangladesh, Pakistan and Afghanistan by offering them a path to Indian citizenship. But critics say the law, which does not make the same provision for Muslims, weakens India’s secular foundations.

On Sunday, protesters in South Delhi, including locals and some students, torched some buses, cars and two-wheelers.

A Reuters witness said police resorted to baton charges and firing tear gas on the protesters to disperse them. The half-a-kilometre stretch of road where the protesters had gathered was strewn with glass, stones, broken bits of bricks and overturned motorcycles.

“About 4,000 people were protesting and police did what they did to disperse them when the crowd burned buses,” said Chinmoy Biswal, a senior police officer in the area. “If it had been a peaceful mob it would have been dispersed peacefully.”

Police later in the evening stormed into the nearby Jamia Millia Islamia University campus where many protesters were believed to have fled and fired tear gas on the campus and marched some students out, while detaining others.

Many students from the storied Muslim university have been protesting against the new law since Friday, when police first used tear gas to disperse protesters.

“Police have entered the campus by force, no permission was given. Our staff and students are being beaten up and forced to leave the campus,” he said.

Students at the nearly 100-year-old university took shelter in the library after police fired tear gas shells, said Tehreem Mirza, a student at the university.

“Police are inside the campus and have been firing shells for a while. That’s why we went to hide in the library. Then we came out. We were walking on the footpath, they told us to put our hands up. Why should we do that? We are not criminals, we are students,” said Mirza. “We saw smoke and burned buses, but that wasn’t us. If someone did something from our community, that doesn’t mean it was us.”

Police defended their move to storm the campus, saying they only entered as they were being pelted with stones from within.

“We had no intention of entering the university campus, we only want to maintain peace and order,” said Biswal.

Some injured protesters were taken to nearby hospitals and a mosque in the Jamia Millia Islamia University area, according to a Reuters witness.

Police did not say how many of the protesters were injured, but said that at least six police personnel had been wounded in the clashes.

Separately, authorities ordered all schools in southeast Delhi to remain closed on Monday, in light of the protests. The Jamia Millia university had on Saturday already declared that it was closing early for its winter break.

Meanwhile, protests against the act continued in parts of eastern India. A highway connecting the states of West Bengal and Assam was blocked in several places on Sunday when protesters, demanding the law be scrapped, burned tires. Violence was also reported in the eastern state of Bihar.

Internet services have been suspended in parts of West Bengal. State chief minister Mamata Banerjee in an address to the people urged for peace and warned that a “section of people are trying to take advantage of the situation and incite communal disharmony.” The Australian actor has been busy promoting Thor: Ragnarok, the Taika Waititi-directed film that is riding a high at the box office.

Hemsworth thanked moviegoers for their support and encouraged others to head to the theater in another Instagram post on Tuesday.

“Thank you everyone who’s seen our movie and everyone who’s gonna see it and anyone who’s still undecided, check it out you won’t be disappointed, thank you all for being awesome!!” he wrote.