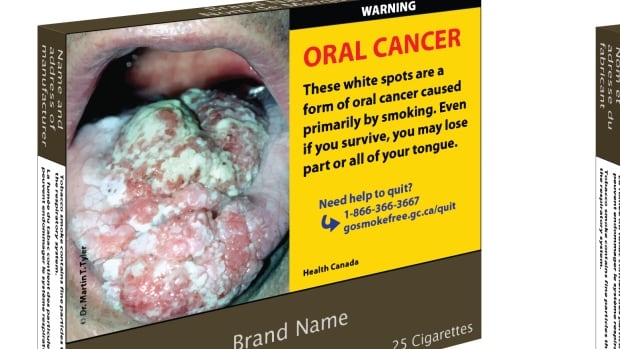 Canadian cigarette packs will have to be plain, drab brown with standardized layouts and lettering under new rules that kick in next Nov. 9, Health Canada says.

Officials said plain packages will increase the impact of graphic health warnings about the dangers of smoking, keeping them from getting lost amid colourful designs and branding.

The government wants to stop cigarette companies from using their packs as tiny ads for their products, insisting even on a single shape and design for the packs themselves — meaning soft packs are out, as are creative designs with bevelled edges and any other distinctive features.

More than four million Canadians still use tobacco — about 17 per cent of the population, Health Canada says.

The federal’s government tobacco strategy aims to drive down tobacco use to five per cent of the Canadian population by 2035.

Health Canada picked the same dark brown for the packages as Australia did for its tobacco products a few years ago, one identified by market researchers as the ugliest colour in the world. Several European countries have used the colour as well.

“Packages with darker colours were perceived to be more ‘harmful to health’ and their products ‘harder to quit,’ in contrast to packages with lighter colours,” the department said in a summary of the plans.

Plain packaging also aims to increase the impact of the graphic warnings.

Health Canada said it is adopting “the most comprehensive measures” on plain packaging.

Health Canada said there could be a shortage of the new packs in the early going as a very limited number of suppliers retool to make just one design instead of many different ones.

The regulations released Wednesday also standardize the size and appearance of cigarettes, cigars and other tobacco products inside the packages.

Specific rules have been awaited since Parliament passed a law requiring them last fall, joining 13 other countries that have adopted similar measures.

The new rules are part of a larger strategy aimed at driving the rate of tobacco use among Canadians down to five per cent by 2035. Federal statistics show that in 2017, 18 per cent of Canadians over the age of 15 said they used tobacco in the previous month, an increase of 15 per cent from 2015.

The Canadian Cancer Society praised the government’s regulations, calling them “the best and most comprehensive in the world.”

Dr. Andrew Pipe, chair of the board of directors of Heart & Stroke and a smoking cessation physician with the University of Ottawa, said he was “delighted” with the move, given that 45,000 Canadians die every year as a consequence of their addiction to nicotine.

“My biggest fear in tobacco is that we’re going to see the progress that we’ve made over the past two or three decades be eroded very dramatically by the explosion [in popularity] of the vaping devices,” Pipe said. “These are very potent nicotine delivery instruments and they very rapidly cause addiction to develop.”

Separately, the federal government is introducing regulations on e-cigarettes.

On the flip side, the industry association representing convenience stores said plain packaging increases the appeal of contraband tobacco products and makes them harder to distinguish from legally marketed ones.