The National Today newsletter takes a closer look at what’s happening around some of the day’s most notable stories. Sign up here and it will be delivered directly to your inbox Monday to Friday.

The Ebola outbreak in the Democratic Republic of Congo claimed its 1,000th victim today, and officials warn that increasing violence in the region has become a “major impediment” to their efforts to halt the spread of the disease.

As of May 1, there had been 1,510 confirmed Ebola cases and 994 deaths since the outbreak began in the DRC’s North Kivu and Ituri provinces last August.

“We are anticipating a scenario of continued intense transmission,” Dr. Michael Ryan, the executive director of the World Health Organization’s Emergencies Programme, told a morning news briefing in Geneva. 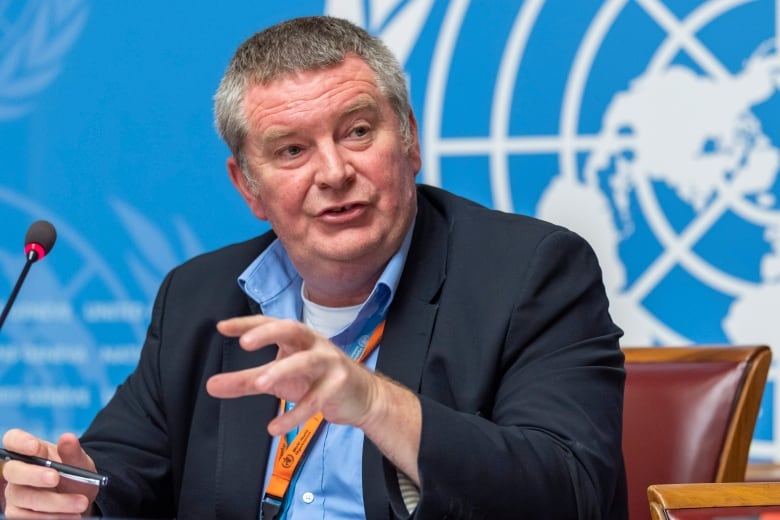 Michael Ryan, executive director of the WHO Health Emergencies Programme, gives an update on Ebola operations in the Democratic Republic of the Congo (DRC) at the European headquarters of the United Nations in Geneva, Switzerland, on Friday. (Martial Trezzini/Keystone/Associated Press)

The current Congo outbreak already ranks as the second-deadliest in history, behind the 2014-16 West African epidemic that killed more than 11,000 people.

But the disease is picking up steam in the DRC, with the most deaths in a single day — 26 — recorded on Tuesday.

The biggest challenge at present is the escalating attacks. There have been 119 separate incidents since January aimed at health care workers, clinics and hospitals, which have slowed efforts to properly dispose of the dead, treat those who have fallen ill, and vaccinate affected communities.

“We’re dealing with a difficult and volatile situation,” said Ryan. “Fundamentally, every time we have managed to regain control over the virus and contain its spread we’ve suffered major, major security events.”

On April 19, for example, a group of gunmen stormed a hospital in the city of Butembo, the epicentre of the outbreak, shooting and killing  Dr. Richard Valery Mouzoko Kiboung, a WHO epidemiologist. The attack appears to have been motivated by the erroneous belief that foreign medical workers are somehow responsible for the spread of the virus.

The father of four is to be buried in his native Cameroon tomorrow. 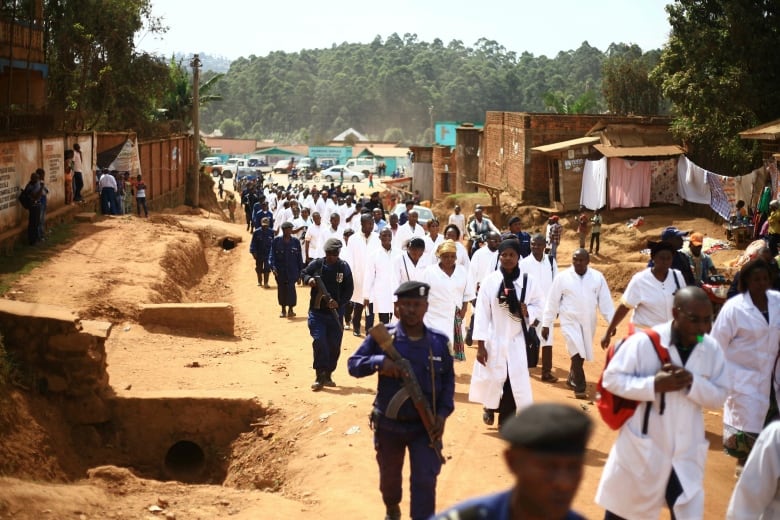 Doctors and health workers march in the Eastern Congo town of Butembo on April 24, after attackers shot and killed an epidemiologist from Cameroon who was working for the World Health Organization. (Al-hadji Kudra Maliro/Associated Press)

Yesterday saw yet another raid on a treatment centre in the city, but it was thwarted before anyone was injured, and the attackers were arrested.

Misinformation and rumours about Ebola are rife in the region.

A survey of residents of Beni and Butembo, published in the Lancet in March, found that 25 per cent of respondents thought that the outbreak was made up. The report added that more than 85 per cent of people had heard talk that the disease was a plot to destabilize the area.

A December decision by then-president Joseph Kabila to delay election voting in the region, in order to prevent people from spreading the disease, helped fuel a belief that the government was exaggerating the threat to prevent opposition gains.

And there is considerable anger and suspicion about all the foreigners and money flooding in to fight one illness while chronic conditions like tuberculosis or cholera are mostly overlooked.

Whatever the underlying reasons, there are more than 100 militias and rebel groups battling for government control in the region, and the mistrust and violence now risks spreading the outbreak across international borders. 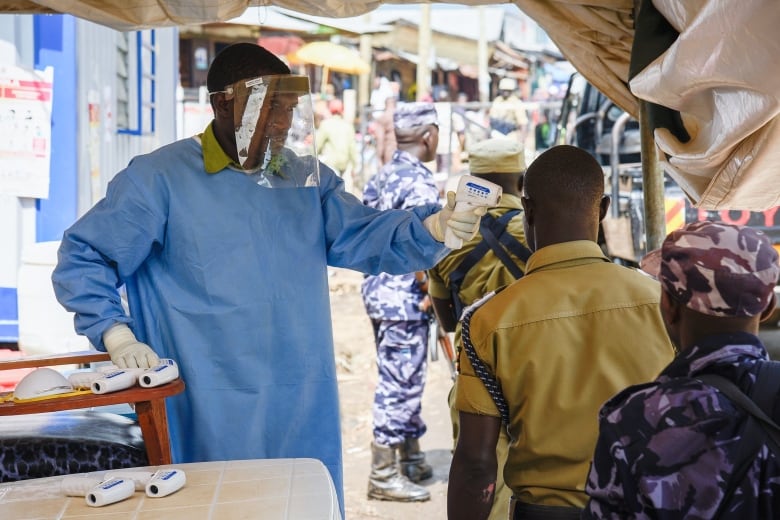 A medical assistant uses a non-contact thermometer to check the temperature of people at the Ebola screening point bordering with Congo in Mpondwe, western Uganda. Border checkpoints are trying to identifying people infected with Ebola to stop it being carried to neighbouring regions. (Isaac Kasamani/AFP/Getty Images)

Over the past month, more than 60,000 people have fled their homes  and crossed into neighbouring Uganda, many illegally via lakes and forest paths that allow them to evade infection control measures that have been put in place at the official crossings.

The WHO has so far stopped short of declaring the Congo outbreak a “public health emergency of international concern” — a term used to denote a crisis with potentially global ramifications — but that decision may come soon.

Inoculation efforts are being expanded with the introduction of a second experimental Ebola vaccine, and new efforts to work around the most dangerous areas by encouraging people to travel to safer zones for their shots.

But money remains a big issue.

The WHO today said that it has already spent $ 88 million US trying to contain the outbreak — $ 31 million more than it had budgeted — as security and staff costs mount and other aid groups scale back or suspend their operations due to the danger.

The UN body has only collected $ 34 million from donor nations so far, leaving a $ 54 million funding gapeven as more resources are needed in the region.

How do you cope when violence follows you even into the safe places? The National’s co-host Adrienne Arsenault speaks to a remarkable survivor.

There are some stories, some faces, some names, some moments that stay seared in journalists’ minds. I have a whole bunch of them rattling around in mine, all sometimes vying for the attention, time and space to remember and reflect on them. Many are from the days when I worked in the Jerusalem bureau.

CBC News producer Ian Kalushner was there during those acute years too, and in a blink he can still recall dates and faces and names. That’s why, when reading about last month’s shooting at the Poway California Synagogue, he stopped cold.

Ian saw a name we both knew from an intense and dangerous day in July of 2006: Shimon Abitbul. 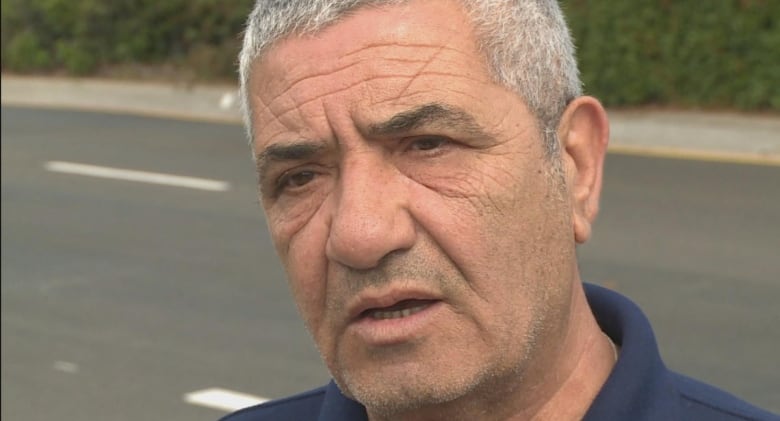 Back in 2006, Abitbul was a medical director with Magen David Adom in Kiryat Shmona, in northern Israel. That’s the ambulance and paramedic service that, in those weeks, was responding to well over 1,000 rocket attacks on the small city.

This was the time of Israel’s war with Hezbollah, and Kiryat Shmona was in Hezbollah’s sights. It was violent and frightening for the people there, and over the course of a long, tense day we watched Abitbul race from one terrifying moment to the next, always calm and kind and professional.

But to see his name referenced as someone who happened to be in the Poway synagogue at the moment of the recent shooting was so odd. What was he doing there?

So, Ian did and as Ian does, and he found Abitbul.

We connected on Skype and he talked so proudly of his three grandchildren, two of whom were with him in the synagogue at the time of the shooting. He talked of hearing the shots and immediately dropping to the ground, covering his two-year-old grandson with his body and holding the boy’s mouth closed as the frightened little guy was trying to scream. Then, he went to work trying to save a life.

Abitbul was there on vacation, in a place he called “heaven.” Our conversation led to discussing what it’s like when you spend your working life with your guard up, only to drop it while at rest — and then the unthinkable happens.

How do you cope when trauma trails you?

That’s the story we are working on for this Sunday’s The National. Please tune in, he’s a pretty amazing man.

Israeli medic Shimon Abitbul knows war and terror, but when he went on vacation to the U.S. he thought he was leaving that trauma behind – until it found him in a synagogue in Poway, Calif. 0:46

Fans of Sports Illustrated magazine’s swimsuit edition have known what to expect year after year since the first one in 1964: a sexy, often blonde woman in a skimpy bikini posing on a beach. Maybe it was getting a little predictable, so this year the magazine’s team came up with something completely different — and it’s got people talking, producer Tarannum Kamlani writes.

Close your eyes and imagine a Sports Illustrated Swimsuit Edition model. Chances are she looks like this or this or maybe this.

You’re probably not expecting this:

The image of a hijab-sporting, burkini-wearing Halima Aden is probably not what you first thought of.

Somali-American Aden, 21, was born in a refugee camp in Kenya and emigrated to the U.S. as a seven-year-old. She made history in 2016, wearing a hijab as a contestant in the Miss Minnesota USA beauty pageant and reaching the semi-finals.

She’s also the first hijabi model to land the covers of major magazines in Britain and the U.S.

“I never really felt represented, because I never could flip through a magazine and see a girl who was wearing a hijab,” Aden says in a behind-the-scenes video for her photoshoot.

The hijab has been mainstream here for some time now, of course, and the garments are supposed to show modesty. The burkini, meanwhile, has become such a lightning rod that some cities and towns in France have attempted to ban it.

So how have they turned up in the pages of the Sports Illustrated Swimsuit Edition, of all things?

The juxtaposition has been jarring for some, a cause for celebration for others. And there those who proclaim it’s the latest sign that Shariah Law is upon us.

Tonight on the Pop Panel we unpack what that range of responses is all about. Joining Andrew Chang in The National‘s studio are Toronto writer Stephen Marche, Ishani Nath, senior editor at Flare.com, and guest panelist, tech entrepreneur and writer Huda Idrees.

What to get Ian for Christmas.

“Paying a fine or even civil litigation is inadequate if we want to deter corporations from killing people in their pursuit of profit.”

– Andrew Kolodny, an opioid policy researcher at Brandeis University, applauds a Massachusetts jury’s guilty verdict for drug company executives who bribed doctors to get them to prescribe a highly addictive fentanyl spray. 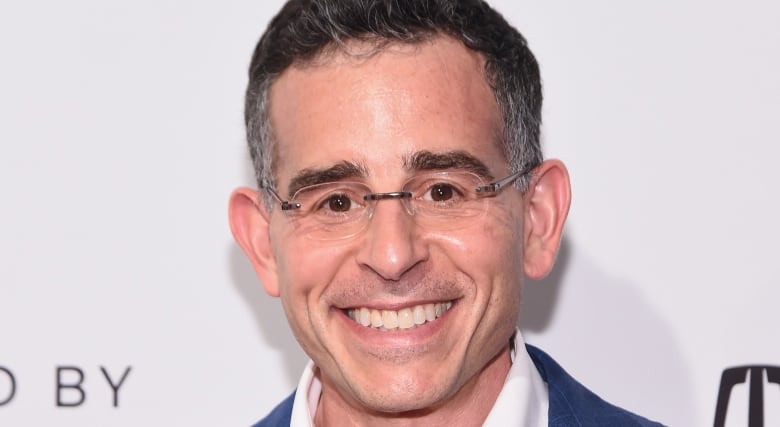 True, “Doc” Forbes Hendry’s tattoo parlour in Victoria, B.C., wasn’t that far from the Canadian naval base in Esquimalt, and swabbies still made up the bulk of his clientele. But then there were customers like “Joan,” a mother of four who was there to get her eighth design, completing the pair of love birds on her chest. “It’s something no one can take away from me,” she explained, “and it’s really a beautiful piece of art when it’s finished.”