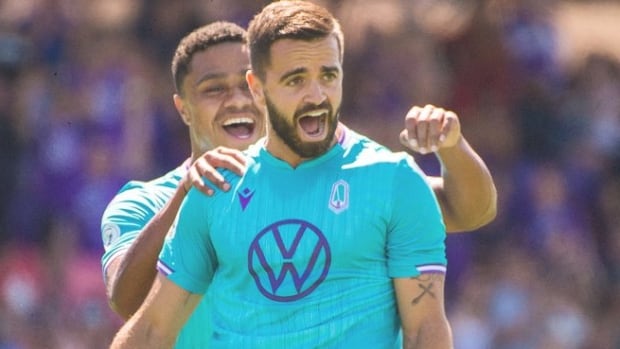 Although it took its toll, Pacific FC recorded their first win of the Fall season with a 3-1 victory over the HFX Wanderers on Saturday.

With the win, Pacific snapped a three-game losing streak, but the cost was significant, as key contributors Victor Blasco, Kadin Chung, and Hendrik Starostzik all went down before the 70-minute mark.

The home side got off the ground quickly, as Blasco sent a stunning free kick past goalkeeper Christian Oxner in the ninth minute.

Pacific, however, as they’ve done all too often this season, wasted their lead, conceding in the 15th as HFX’s Matthew Arnone headed home a corner. The goal came as a huge relief for the Wanderers, who hadn’t yet scored a CPL goal away from home.

WATCH | Pacific vs. HFX Wanderers match in a minute:

Both sides threatened throughout the first half, with Blasco especially getting a number of chances. However, it wasn’t until the hour that Pacific’s Terran Campbell tapped in his team-best sixth goal to break the deadlock.

With 30 minutes remaining, the Wanderers desperately sought an equalizer, hoping to pick up a road point for the first time, but Pacific’s goalkeeper Nolan Wirth kept the road team at bay.

Campbell would then deliver the final dagger, sliding in to finish an excellent cross from Zachary Verhoven in stoppage time to make it 3-1.

With seven goals on the season, Campbell is now  tied with Forge FC’s Tristan Borges for tops in the CPL.

The home side, looked the better of the two from the whistle, as Forge kept their Winnipeg opponents at bay to earn a third league win in a week.

An unmarked Elimane Cisse scored the opener for Forge in the 32nd.

A few minutes later, Hamilton notched its second after Dominic Samuel was slashed down in the box, sending Emery Welshman to the spot. His right-footed effort earned his club a much-deserved 2-0 first-half lead.

Valour was given a lifeline early in the second when striker Tyler Attardo, who came on at the start of the half, finished off a set-piece opportunity.

WATCH | Forge vs. Valour match in a minute:

Forge FC extend their Fall season lead with a 3-1 win over Valour FC in Hamilton. 1:10

But Hamilton’s Kadell Thomas finished Valour off in style come injury time, driving around defenders at the near post before pulling the ball back and chipping a helpless Tyson Farago to end the game 3-1 for the home side.