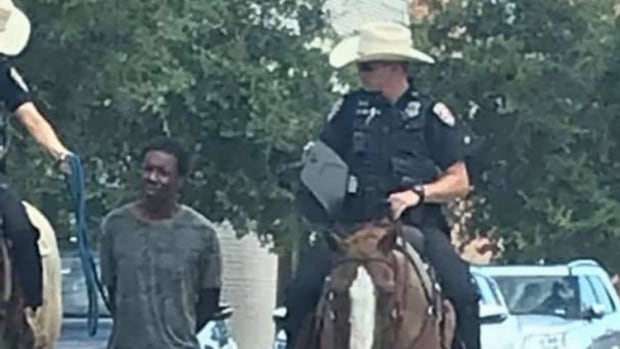 The police chief of a Texas Gulf Coast city has apologized after two white male officers mounted on horseback led a black, handcuffed trespassing suspect by a rope through downtown streets.

Photos of the Saturday arrest were widely circulated on social media, with many commenting on the appearance of a black man being led by mounted officers through city streets. Galveston police Chief Vernon Hale said in a statement Monday that while his officers used a technique that’s acceptable in some situations, such as with crowd control, they “showed poor judgment in this instance and could have waited for a transport unit at the location of arrest.”

Hale said his department has “immediately changed the policy” to prevent further use of the technique.

The officers had linked the rope to handcuffs worn by 43-year-old criminal trespass suspect Donald Neely and led him to a mounted patrol staging area.

The photo of Neely was widely shared on social media:

The <a href=”https://twitter.com/hashtag/Galveston?src=hash&amp;ref_src=twsrc%5Etfw”>#Galveston</a> police chief says officers were wearing body cameras during the controversial arrest of a mentally ill man who was handcuffed and escorted w/ a rope by officers on horseback. The chief has now ended this “technique,” saying officers showed poor judgement. <a href=”https://t.co/Pv8GN33njh”>pic.twitter.com/Pv8GN33njh</a>

Neely is free on bond. He has no listed telephone number and couldn’t be reached for comment.

Hale told the Galveston County Daily News that he regularly talks to his officers about how their actions affect people’s perception of the department.

Mary Patrick, president of the Galveston chapter of the NAACP, told the newspaper that the department had an obligation to explain the officers’ actions to the public. Patrick later said she had spoken with Hale and the police chief had the NAACP’s support.