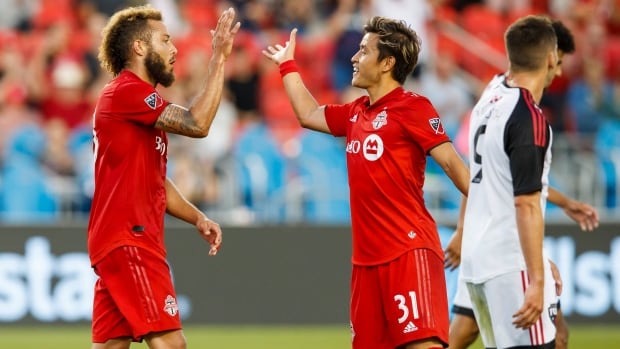 Nick DeLeon scored a pair of goals in the opening half and Patrick Mullins also scored for Toronto, which will play for the Voyageurs Cup for the fourth consecutive year.

Toronto FC advanced after winning both matches against Ottawa, 5-0 on aggregate.

Toronto opened the scoring in the 14th minute when Richie Laryea passed the ball to DeLeon inside the box. DeLeon shot the ball into the bottom corner of the net for a 1-0 lead.

In the 37th minute, Mullins scored when DeLeon won a one-on-one battle for the ball with Irving. DeLeon passed the ball to Mullins, who had an empty net and tapped it in for a 2-0 lead.

DeLeon scored his second of the game when he got around two Ottawa defenders, and his shot from outside the box sailed into the net to make it 3-0 Toronto.

Toronto FC defeated the Ottawa Fury 5-0 on aggregate to advance to their fourth-straight Canadian Championship Final. 2:28

Toronto FC dominated the opening half, firing 10 shots toward Ottawa’s goal with five them on target.

Ottawa had two shots in the opening half and both were on target.

In the 13th minute, Ottawa striker Hadji Barry dribbled the ball inside the box before taking a wide-angle shot that was easily saved by Toronto’s Alex Bono.

In the 25th minute, Ottawa’s Christiano Francois received a through ball from Carl Haworth and had a clear chance at the net, but his shot went right to the chest of Bono.

DeLeon received a yellow card in the 58th minute for grabbing an Ottawa player on the counter-attack.

Toronto’s Noble Okello made his TFC debut when he subbed into the match to begin the second half. He had a scoring chance in the 65th minute from just outside the box, but Ottawa defender Thomas Meilleur-Giguere blocked his shot.

Ottawa’s Jeremy Gagnon-Lapare had four scoring chances in the second half. Bono easily handled one and the other three missed the goal.

Anthony Jackson-Hamel scored in the opening half and goalkeeper Clement Diop made three saves to record the shutout for Montreal in front of a crowd of 5,633 fans at Spruce Meadows’ ATCO FIELD.

After winning both matches against Cavalry FC, 3-1 on aggregate, the Impact will play for the Voyageurs Cup next month.

Calgary had a good chance to score in the eighth minute, but Mauro Eustaquio’s hard shot from outside the box was deflected, making it easier for Diop to make the save.

The Impact opened the scoring in the 13th minute when Jackson-Hamel headed Saphir Taider’s corner kick past Cavalry goalie Marco Carducci, who got his hand on the ball before it trickled across the line.

The Montreal Impact beat Cavalry FC 3-1 on aggregate, and will play Toronto for the Voyageurs Cup next month. 4:50

Calgary continued to press and it nearly resulted in a goal when Dominick Zator headed a corner kick by Jose Escalante on net, but Dior leapt in the air to knock the ball over the net.

Montreal’s Jorge Correales received a yellow card in the 35th minute after he slid to get the ball, but instead tackled Calgary’s Julian Buscher in the process.

With time winding down in the first half, Buscher had another scoring chance for Calgary but his hard shot hit Montreal’s Bacary Sagna right in the face.

In injury time, Zator booted a shot from 12 yards out just over the net before time expired.

The Impact had a good chance to extend their lead in the 64th minute when Lassi Lappalainen received a through ball from Maxi Urruti before letting go a shot that went wide of the net.

Calgary finished with just three shots on target but 18 shots overall as Montreal put up a solid defensive effort.