The MLS club suspended all supporter privileges after flares and smoke bombs led to small fires in the stands and the pitch at TD Place Stadium last Wednesday during the first leg of the series against Ottawa Fury FC.

Inebriatti initially said it had no part in the flare thrown on the field or any explosion. But it issued a new statement Monday.

"We wish to clarify that the incidents which interrupted game play were unplanned and accidental. However, we fully understand that such incidents are not acceptable," it said.

"We are taking internal steps to eliminate potentially dangerous and aggressive behaviour — including renouncement of all unsanctioned usage of flares and smoke. Going forward our focus will be public safety, to support the team and rebuild public trust.

"We have communicated to the team that our behaviour has not been good enough. Incidents that distract from game play are not acceptable and will no longer be tolerated. We will continue to offer full co-operation to the front office and any relevant investigation. All ensuing disciplinary action by the front office, related to events of July 18th, should be directed solely towards Inebriatti rather than all official supporter groups."

A club spokesman said the ban on all supporter privileges remains in place.

The rematch with Ottawa on Wednesday — with Toronto holding a 1-0 lead — marks the first game at BMO Field since the incident. A club spokesman said earlier Monday that the ban means all supporter groups will not be able to use banners, flags, smoke, drums, bullhorns or noisemakers in the stadium.

Toronto says it is co-operating with Ottawa Police in it investigation, as well as conducting its own internal review of the club's supporter program "to ensure the safest environment possible at BMO Field moving forward."

It's not the first time the club has been at odds with its various supporter groups.

In 2016, some of Toronto's supporters groups joined forces in going silent during a home game against Orlando to protest recent sanctions against the Inebriatti after an obscene banner was raised in its section during a loss to visiting Montreal. TFC called the banner "an embarrassment" to the club and its supporters.

The south stand, the normally raucous home to loud flag-waving fans, was silent and prop-less.

The Inebriatti group was sanctioned for misbehaviour in Montreal in the final game of the 2015 regular season after Toronto fans lit flares and damaged Saputo Stadium. 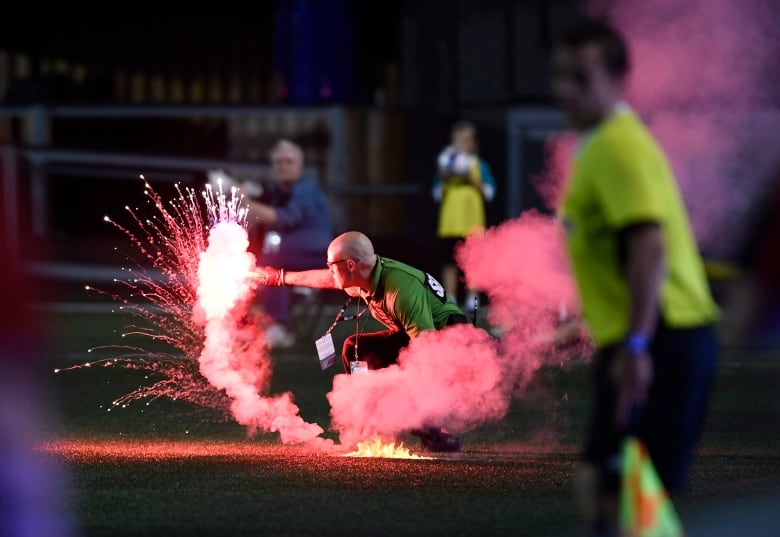 A security guard picks up a flare that was thrown onto the field in Ottawa during Wednesday's Canadian Championship game between the Ottawa Fury FC and the Toronto FC. (Justin Tang/Canadian Press)