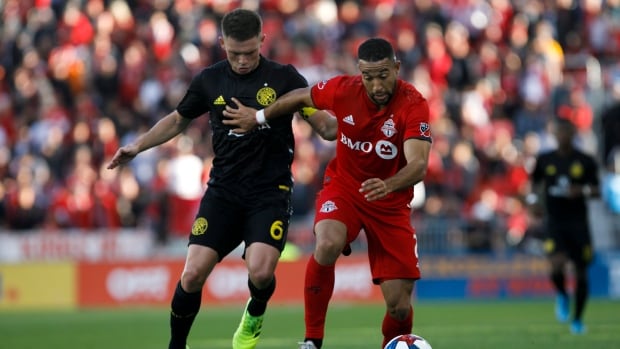 Alejandro Pozuelo scored on an elegant free kick Sunday to give Toronto FC a 1-0 win over Columbus Crew SC and a home game in the first-round of the MLS playoffs.

Toronto (13-10-11) leapfrogged the New York Red Bulls and D.C. United on the final day of the regular season to finish fourth in the East via goal difference over D.C. United. TFC and D.C. United will meet at BMO Field on Oct. 19 or 20 with the winner facing conference-leading New York City FC in the Eastern semifinals.

A moment of brilliance from Pozuelo in the 57th minute ended a scoreless deadlock after Jozy Altidore was taken down just outside the penalty box. The Spaniard coolly slotted the ball over the Columbus wall and into the corner of the goal for his 12th goal of the season.

On a negative note, Altidore exited gingerly in the 70th minute after a collision in the Columbus box before an announced crowd of 23,692.

Toronto came into Decision Day in sixth spot in the Eastern Conference, but able to finish anywhere from fourth to seventh. Jumping to fourth required a Toronto win and help from other quarters.

All the planets aligned with the Toronto win combined with the Red Bulls falling 3-0 in Montreal and D.C. United settling for a scoreless draw at home against nine-man Cincinnati.

A goal and an assist by Orji Okwonkwo led the Montreal Impact to a 3-0 victory over the New York Red Bulls on the final day of the Major League Soccer season.

Bojan and Maximiliano Urruti also scored for the already-eliminated Impact (12-17-5), who snapped a four-game winless run. Goalkeeper Clement Diop made his second start for Montreal, stopping one shot for the clean sheet.

With their first loss in three weeks, the playoff-bound Red Bulls (14-14-6) dropped to sixth in the Eastern Conference. New York will play the Philadelphia Union at Talen Energy Stadium in the first round of the post-season.

A determined Montreal side put pressure on New York from the opening whistle with early chances from Ignacio Piatti, Okwonkwo and Saphir Taider.

The breakthrough came when Okwonkwo blew past two New York defenders in the 23rd minute, raced into the box and squared a ball to Bojan. The former Barcelona midfielder easily tapped it in from six yards out for his second goal in as many games.

WATCH | Impact finally get in the win column:

It was the first goal conceded by Luis Robles following three consecutive shutouts.

The home side doubled its lead in the 37th through Urruti’s fourth of the season. With the Impact claiming a penalty after Jukka Raitala went down in the box, Urruti took advantage of the confusion by stripping substitute Michael Murillo of the ball and beating Robles from a tight angle into the side netting.

Okwonkwo put the game out of reach in the 62nd minute when he chested the ball into the back of the net off a cross from Taider.

It was Montreal’s most convincing win since a 4-0 victory over Philadelphia on July 27.

Piatti left the game in the 85th minute to a standing ovation and fans chanting his name. The Impact’s star midfielder, who joined the club in 2014, is waiting to see if Montreal will exercise an option on his contract for 2020.

The Vancouver Whitecaps wrapped up a disappointing season with a 1-0 loss to Real Salt Lake on Sunday.

It’s been a difficult season for the ‘Caps (8-16-10), who underwent a major roster overhaul last winter and struggled all year to find an offensive spark.

Despite the challenges, the squad went into the final contest of the year on a three-game unbeaten streak, but Vancouver’s scoring chances were once again limited in Sunday’s effort.

One of the ‘Caps best opportunities came in the 27th minute when winger Michaell Chirinos sent a right-footed shot sailing toward the RSL net. The ball skimmed just wide of the left post.

A minute later, the visitors retaliated, making some quick passes around the box before Corey Baird put a shot on net. Kreilach took the ball on his head, bouncing it past Crepeau to put Salt Lake up 1-0.

Baird and Kyle Beckerman each registered an assist on the play.

While Sunday’s loss marked the end of the Whitecaps’ season, Real Salt Lake has secured a spot in the Major League Soccer playoffs.