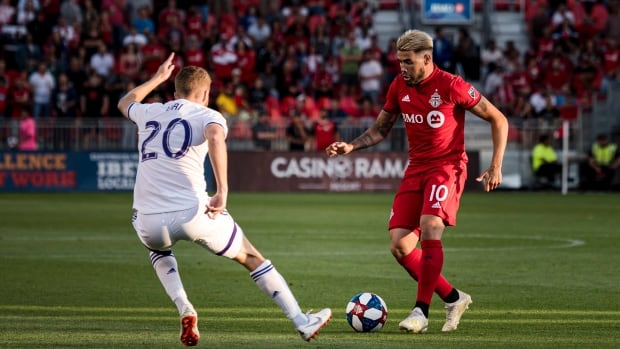 Turning a losing result into a draw typically would be cause for celebration.

But with nine games remaining in the regular season and just three at home, Toronto FC wasn’t smiling after rallying for a single point on Saturday.

“We need to pick up three points every time we are at home,” defender Omar Gonzalez said. “That’s why we’re all upset about tonight. We didn’t lose, but it feels like we lost.”

Patrick Mullins scored his first goal since joining TFC in his team’s 1-1 draw vs Orlando. 1:19

TFC (9-10-6) had a chance to move into the top seven in the Eastern Conference, a requirement to qualify for the playoffs, had they picked up three points. They had to settle for one.

Both teams opened the game a little sluggish as they tried to find their footing.

The Reds had a couple of scoring chances in the opening half. In the fourth minute, Alejandro Pozuelo’s chip from inside the box sailed just over the crossbar.

In the 28th minute, Pozuelo set up another chance for Toronto FC. His chip pass from outside the box narrowly missed Jozy Altidore inside the box. His attempt to head the ball down missed and went out of bounds.

Orlando had the only shot on target in the first half. Nani’s shot from outside the box was headed for the net. TFC goalkeeper Quentin Westberg managed to get a hand on the ball along the goal line and sent the ball out of bounds.

Toronto midfielder Marky Delgado was issued a yellow card in the 34th minute for a hard tackle on Nani. The Orlando midfielder stayed in the game despite a brief delay for examination by the team’s medical staff.

Toronto came out strong to start the second half.

Midfielder Richie Laryea had a chance in the box. Despite an initial tackle by Orlando’s Kamal Miller than went uncalled, Laryea got a shot on target, but ‘keeper Brian Rowe saved it in the middle of the goal.

In the 59th minute, Tsubasa Endoh thought he scored the first goal for TFC. His shot from outside the box landed on top of the net.

In the 62nd minute, Pozuelo’s shot from in close hit the post.

Delgado had a shot from in close that was saved by Rowe in the 66th minute.

After a dominating attack from Toronto FC, Orlando scored on the first opportunity of the second half. Two minutes after coming onto the field via substitution, Chris Mueller found Michel, who put the ball into the back of the net for a 1-0 lead in the 69th minute.

“We fell asleep on the one play,” Gonzalez said. “The margin in error for us is slim.”

Sebastian Schweinsteiger scored in the 88th minute to help the Chicago Fire beat the Montreal Impact 3-2 on Saturday night.

Schweinsteiger slipped a header, off a corner kick from Djordje Mihailovic, inside the post to cap the scoring.

Bastian Schweinsteiger scored the game winner in the 88th minute of Chicago’s 3-2 win over Montreal. 1:01

Dax McCarty first-timed a pass from Schweinsteiger in the ninth minute and Nemanja Nikolic scored in the 19th to give Chicago a 2-0 lead. Francisco Calvo stole a pass near midfield and played a through ball to Aleksandar Katai, who crossed it to Nikolic for the side-footed finish from point-blank range.

Saphir Taider converted from the spot in the 34th minute and Bacary Sagna scored his first goal of the season to tie it in the 76th. Jorge Corrales took a corner kick from Maximiliano Urruti and lobbed a cross toward the far post where Sagna headed home the finish.

Marvin Loria scored the go-ahead goal in the 55th minute before Jeremy Ebobisse’s goal sealed it the 90th minute, and the Portland Timbers defeated the Vancouver Whitecaps 3-1 in a Cascadia Cup rivalry match on Saturday night.

Sebastian Blanco also scored for the Timbers, who were playing the first of a 10-match homestand at Providence Park. Portland (10-9-4) extended its unbeaten streak at home to six games.

The Cascadia Cup, created by supporters of the Timbers, Whitecaps and Seattle Sounders, is awarded to the winner of the head-to-head competition between the three teams each season, based on points.

The Whitecaps, who beat Cincinnati 2-1 on the road last weekend, were undefeated in their previous two matches after a five-game losing streak. Vancouver (5-12-9) has won just twice on the road this season.

The Timbers were coming off a 2-1 loss in a U.S. Open Cup semifinal match to Minnesota United. It was the second straight loss to the Loons at Allianz Field, Portland lost 1-0 in an MLS match last Sunday.

Blanco put the Timbers up in the 28th minute. Whitecaps goal keeper Maxime Crepeau got his hands on the blast from outside the penalty box but he couldn’t keep it out of the net. It was Blanco’s fourth goal of the season.

The goal came with the Timbers playing a man up on Vancouver after Ali Adnan went down on a hard collision in front of the Whitecaps’ goal. Vancouver subbed in Brett Levis, but not until the 30th minute.

The Timbers were angry at the end of the first half because of what appeared to be a missed handball that would have given the team a penalty kick. Coach Giovanni Savarese jawed at the refs as they prepared to walk off the field.