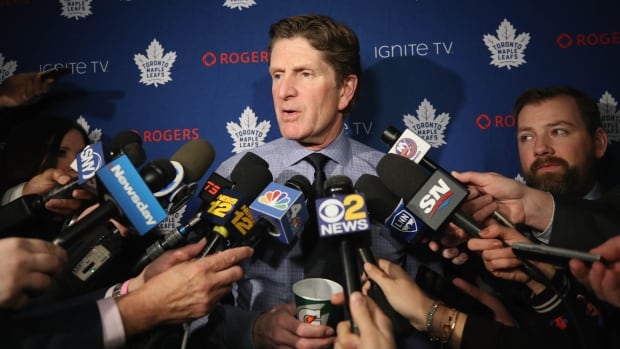 The Buzzer is CBC Sports’s daily newsletter. Subscribe here to get it delivered directly to your inbox every weekday.

The honeymoon is over for Mike Babcock

When he parted ways with Detroit and became Toronto’s head coach in May 2015, it looked like a savvy move by everyone. Babcock was leaving a decaying team for a marquee franchise with nowhere to go but up under new (and smarter) management. For the Leafs, adding the most respected coach in the NHL (and a guy with a Stanley Cup and two Olympic gold medals) was a big step in the rebuilding plan.

Everyone knew Babcock had his eye on Toronto, but he leveraged interest from other teams into an 8-year, $ 50 million US contract — easily the biggest ever for an NHL head coach. To put that in context, only two Leaf players made more than him this season. But coaches’ pay doesn’t count against the salary cap, so the Leafs were praised for throwing their financial weight around to make the team better. Fans loved it.

Babcock missed the playoffs in his first year, but that was expected. Then the Leafs won the draft lottery and added top pick Auston Matthews and Mitch Marner (chosen the year before) for the 2016-17 season. They surprisingly snuck into the playoffs and almost upset the best regular-season team (Washington) in the first round. All six games were decided by one goal, and five went to overtime. The next year, Toronto moved up the standings but lost to Boston in Game 7 of the first round. Not great, but the Bruins were favoured to win the series and everyone figured the young Leafs were still learning playoff hockey.

This season, though, expectations went up. After signing star centre John Tavares as a free agent, the Leafs were actually favoured to win the Stanley Cup by some sports books. Toronto ended up finishing seventh overall in the regular season, and a long playoff run still seemed possible despite another tough matchup with the Bruins. But last night, a second consecutive Game 7 loss in Boston burned the last of Leafs fans’ patience and optimism. They’re as angry as they’ve been in years, and a lot of them are blaming their auburn-haired coach (#FireBabcock was a thing on Twitter last night).

Babcock criticism has been bubbling all season because of questionable tactics and odd lineup decisions (example: ripping William Nylander after his contract holdout was a popular thing to do this year, but what was he supposed to do with some of the linemates Babcock gave him?) Last night was the last straw. Babcock declined to jack up the ice time for his best forwards, even with the Leafs trailing for most of the game. Matthews played less than 19 minutes. That’s really low for your most talented scorer in a do-or-die-Game 7 where you never had a single penalty to kill.

Babcock still has four years and $ 25 million US on his contract, so it’s unlikely the Leafs #fire him, no matter what their angriest fans say. He has a long enough track record to deserve another shot, and enough smarts to reconsider some of his tactics. But Babcock is entering a scary new phase of his career. The worm has turned. The heat is on. He no longer has the benefit of the doubt.

Other stuff we’re talking about

San Jose trailed Vegas 3-0 with less than 11 minutes left in the third period when Sharks captain Joe Pavelski was cross-checked in the chest off a faceoff, knocking him off balance before a bump from another player sent him down. His head hit the ice, leaving him motionless and bleeding. No penalty was called initially, but after seeing the gruesome aftermath (and getting lobbied by several Sharks players) the referees gave Cody Eakin a five-minute major for the cross-check. San Jose scored four power-play goals in the next four minutes, then survived a late tying goal by Vegas to win in OT and move on to the second round.

Great story, but Vegas got robbed. Eakin’s cross-check was pretty garden variety — maybe deserving of a two-minute penalty, but no more. Vegas’ Jonathan Marchessault said after the game that the refs “just called the outcome.” He’s right. Pavelski’s injury was awful, but more a fluke than anything else. Ironic: how many savage and unfair third periods have we witnessed in NHL playoff history because referees didn’t want to “decide the game” by calling a penalty? And then this.

On a night when the country’s Stanley Cup curse reached 25 seasons, the Raptors kept the chance of Canada’s first NBA title alive by advancing to the second round. Their five-game victory over Orlando was no surprise — Toronto was heavily favoured in the series. But there were some nervous times after the Magic stole Game 1. Turned out to be a complete red herring — the Raps won the next four games by an average of more than 18 points.

Their next opponent is the Philadelphia 76ers, who finished off Brooklyn last night. A start date hasn’t been announced yet. It should be an interesting series. Philly is an extremely talented but flawed team with three star players that all carry question marks: point guard Ben Simmons is a phenomenal athlete who can’t shoot, Joel Embiid is a superstar big man with a dodgy knee who gets tired at the end of games because he’s not in great shape, and Jimmy Butler is a fiery two-way player whose personality rubs everyone the wrong way.

The second round of the NHL playoffs is almost set. After tonight’s Game 7 between Washington and Carolina, we’ll be down to eight teams. The NHL has already announced the start dates for all four second-round series: Columbus-Boston and Dallas-St. Louis both open Thursday night. Colorado-San Jose starts Friday night, along with the Islanders vs. the winner of tonight’s game.

Terry Greer is the headliner in this year’s Canadian Football Hall of Fame class. He became pro football’s first 2,000-yard receiver in 1983, when he surpassed that milestone on 113 catches with Toronto. He had a special connection with quarterback Condredge Holloway, and they helped the Argos snap a three-decade Grey Cup title drought that year. Greer went on to win two Super Bowls with San Francisco, making him the first player to win both the NFL and CFL championships. Also entering the Hall of Fame this year in the player category are “Swervin'” Mervyn Fernandez, Jon Cornish, Ernie Pitts (posthumously) and David Williams. Former coach Frank Smith and CFL executive Jim Hopson are going in as builders.

Damian Lillard is the best story of the NBA playoffs. The Portland point guard has been a very good player for awhile, but he’s really making a name for himself now. He averaged an NBA-best 33 points in the first round and clinched the Blazers’ series win over Oklahoma City last night with an extra long step-back three at the buzzer (garnished with a cold-as-ice wave goodbye).

He also silenced OKC rival Russell Westbrook, who Lillard outplayed all series while engaging in a war of words with the former MVP. You might be hearing more from Lillard too: Portland faces a winnable second-round matchup with either Denver or San Antonio, which could lead to a showdown with either Houston or defending champ Golden State in the Western Conference final.

The Jeopardy! guy became only the second player ever to win $ 1 million — and by far the fastest. James Holzhauer passed that plateau on last night’s show, which was only his 14th appearance. Ken Jennings is the only player in history with more earnings in regular-season play (so not counting tournaments). He won just over $ 2.5 million in 2004, but it took him 74 games (that’s the longest winning streak ever). Holzhauer is racking up the dollars so much quicker because he bets big on Daily Doubles and targets the highest-value answers when he’s in control of the game. The professional sports bettor from Las Vegas already owns the seven highest single-game winnings in history — including a record $ 131,127 a week ago. Jennings’ single-game high was $ 75,000.

That’s it. You’re up to speed. To get The Buzzer every weekday, subscribe below.