That was fast. Only 51 days ago, LeBron James and the Lakers defeated the Miami Heat to win the 2019-20 title. Today, the shortest of off-seasons ended as players reported to their teams’ training camps. A few key points to know about what’s coming up:

There’s no bubble this time. The end of the 2019-20 regular season and the playoffs took place in a tightly controlled, sequestered environment on the Disney World property in Florida. The players refused to do that again, so this time everyone’s out in the wild. Camps, for the most part, are being held in teams’ home cities and the games will be played in their arenas. So players, coaches and staff will be getting on planes and staying in hotels as they travel throughout the United States for road games. The league is allowing teams to decide whether they let a limited number of fans into their buildings, though in many cases that decision is out of their hands due to local government restrictions. The NBA is more or less following the NFL’s blueprint for playing a season during a pandemic, and that’s not exactly going the smoothest right now.

The framework of the season is set. Five days of individual workouts and (mostly virtual) media availabilities will be held before full practices begin Sunday for most teams. Pre-season games start Dec. 11 and the regular season tips off Dec. 22. The all-star break (without the game or the other usual festivities) is March 5-10. The regular season ends May 16. A play-in tournament to decide the final two playoff spots in each conference will be held May 18-21. The playoffs proper open May 22 and a champion will be crowned by July 22 — one day before the Tokyo Olympics begin.

The schedule is still under construction. The plan is for each team to play 72 regular-season games, but none of those have been officially scheduled yet. All we have right now are the pre-season dates. Most teams have three, but it can be as few as two and as many as four. The NBA says the first half of the regular-season schedule (up to the all-star break) is coming soon. The second-half sked will be released during the “latter part” of the first half so that the league can add any games that might be postponed from earlier in the season.

The Raptors are in Tampa for the foreseeable future. The Canadian government wouldn’t allow them to play out of Toronto. So, like snowbirds in the Before Times, the team has relocated 2,000 kilometres south as winter sets in up here. Camp is at Saint Leo University — a small liberal-arts school about half an hour away from Amalie Arena, where the Raptors will play their home games. Toronto’s pre-season games are Dec. 12 and 14 at Charlotte and Dec. 18 vs. Miami.

The NHL is behind. There was hope of starting the season on Jan. 1, but that ship has sailed. Pierre LeBrun reported today that the league “still hopes to drop the puck in early January” but he senses the season could be further delayed. The main sticking point (besides, you know, coronavirus cases surging across the continent) is that the owners want the players to give back even more money. As part of the deal to return to the ice last summer, the players agreed to defer 10 per cent of their salaries for this season and also to allow up to 20 per cent to be held in escrow (essentially insurance for the owners against the near-certain financial hit they’ll take this season). Reportedly, the league is now asking for a 26 per cent deferral along with the agreed-upon escrow. Not surprisingly, the players aren’t happy about this. But it’ll need to be resolved before the NHL can move forward with a plan for a 2021 season. 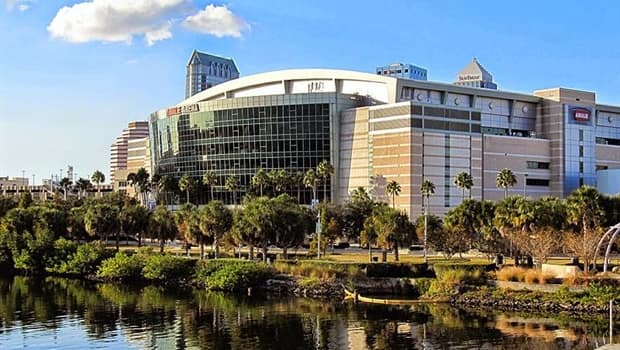 CBC News’ David Cochrane confirms that the Toronto Raptors will begin the next season playing in Tampa, Fla., after their request to play home games in Toronto was denied by the federal government. 1:56

Toronto FC’s head coach surprisingly stepped down. Greg Vanney’s team just got upset in the first round of the playoffs and his contract was about to expire, but he was expected to get an extension. The 46-year-old American was the longest-tenured and easily the most successful coach in team history. He guided Toronto to an MLS Cup championship in 2017 and to two more appearances in the title match, in ’16 and ’19. He won the MLS coach of the year award in ’17 and was named a finalist this season after TFC finished with the league’s second-best record despite having to play nearly all its “home” games in the U.S. because of coronavirus restrictions. Read more about Vanney’s departure from Toronto FC here.

The Ravens-Steelers game is on Wednesday now. Baltimore’s team-wide coronavirus outbreak has now caused the NFL to postpone this matchup three times — from Thursday night to Sunday afternoon to Tuesday night and now to Wednesday at 3:40 p.m. ET. That unusual weekday kickoff time is reportedly because NBC, which has the broadcast rights, wants to show the Rockefeller Center Christmas tree lighting ceremony at night. Yesterday marked the ninth straight day that at least one Ravens player tested positive, bringing the total number of Baltimore players who have either tested positive or been deemed a high-risk close contact to 22. Four Ravens were removed from the reserve/COVID-19 list yesterday but 20 remained on it — including quarterback and reigning NFL MVP Lamar Jackson. He reportedly tested positive last week and will not play Wednesday. Read more about this logistical nightmare of a game here.

The Quebec Major Junior Hockey League shut down for the rest of the calendar year. The 18-team league has had trouble navigating the pandemic since the moment it opened its season in early October. Outbreaks among teams and restrictions imposed by the Quebec government have caused numerous games in that province to be postponed, and last week’s dismantling of the so-called Atlantic bubble brought a halt to games in the six-team Maritimes Division. Now the QMJHL has suspended all activities through Jan. 3. This obviously doesn’t bode well for Canada’s other two major junior leagues — the WHL and OHL — which are hoping to launch their seasons in January and February, respectively. Read more about the QMJHL shutdown here.

Lewis Hamilton tested positive for the coronavirus. He’s already clinched his fourth consecutive Formula One drivers’ championship and the seventh of his career, matching Michael Schumacher’s all-time record. But the Mercedes star will miss the season’s penultimate race — this weekend’s Sakhir Grand Prix in Bahrain — after testing positive following his victory on Sunday (also in Bahrain). The team said Hamilton is experiencing “mild symptoms” and is in isolation.

Did you know Darth Vader competed in the Commonwealth Games? James Earl Jones voiced the iconic villain, but Star Wars creator George Lucas wanted someone more physically imposing underneath the costume. So that role was filled by Dave Prowse, a 6-foot-6 actor/bodybuilder/weightlifter who represented England in the heavyweight division at the 1962 Commonwealth Games (he didn’t win a medal). If you’re wondering, Prowse is not the man you see when Vader’s mask is finally removed near the end of 1983’s Return of the Jedi (that’s a different actor). Prowse died over the weekend at the age of 85. Mark Hamill, who played Vader’s son, Luke Skywalker, called Prowse “a kind man and much more than Darth Vader.”