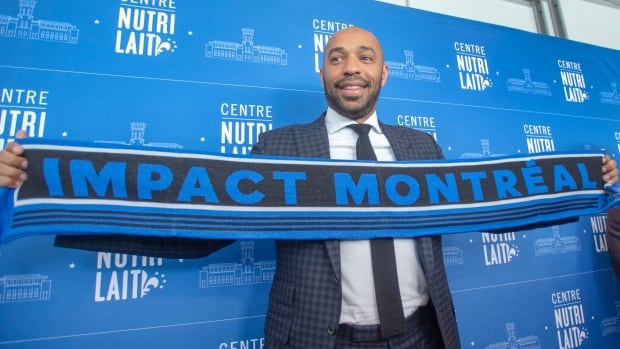 Over the 42-year-old’s illustrious 20-year playing career, Henry became the all-time leading scorer for both Arsenal and France, and led his country to a 1998 World Cup title at home, followed by a EURO 2000 win.

Henry spent four-plus seasons in MLS with the New York Red Bulls, scoring 51 goals and adding 42 assists in 122 games. He won the Supporters’ Shield in 2013 and was a four-time MLS all-star.

Henry retired in 2014 and quickly moved into coaching, beginning with the Academy of English club Arsenal, then as an assistant with Belgium’s national team.

WATCH | Henry with only positive things to say about Impact, MLS:

In 2018, Henry accepted a coaching position with French side AS Monaco, the club he joined to start his professional playing career, but was eventually dismissed in January.

“It’s about fighting all the time, this isn’t only my story it’s the story of everybody in life. You are going to fall but it’s how to get up,” said Henry.

Henry will be at the helm of his new team as of mid-January when training camp begins and takes over a Montreal squad that went 12-17-5 this year and missed the MLS Cup Playoffs for a third consecutive season.

Henry said he long ago fell in love with French-speaking Montreal, a diverse city where he hopes to have a long adventure with the Impact.

Henry needs no reminder about his brief stint in charge of AS Monaco but the former France striker said on Monday he hopes the experience will benefit him in his new role as coach of Montreal Impact.

Henry failed to spark a change in fortunes at struggling Monaco and was sacked in January after just 103 days but is not about to let his first head coaching role define him as he gets set to take charge of a Major League Soccer club.

‘Became better player in the darkness’

“You guys always remember the good stuff, but I became a better player in the darkness,” Henry, who won a World Cup in 1998, said at his introductory news conference in Montreal.

“Hopefully that’s going to help me to become a good coach.”

During Henry’s stint as coach of French Ligue 1 side Monaco, where he also played five seasons and won the league title in 1997, the squad lost 11 of their 20 matches.

But despite Henry’s turbulent introduction to being a head coach, the Frenchman said it would be a mistake to just give up and not try to show what he has learned.

“I learned a lot there. The only mistake you can make is not learning from what happened. You have to confront it.”

Henry, who scored 51 goals in 123 appearances for France and played at four World Cups, is eager for the chance to show the world he has what it takes to be a successful coach.

With the Impact, Henry succeeds Wilmer Cabrera in the position. The team announced last month that Cabrera’s contract had expired and would not be extended.