OTTAWA — It was an embrace that seemingly lasted a lifetime.

Chelsea Carey just missed a double in the final end to force an extra end allowing Rachel Homan and her team to clinch an Olympic berth for Canada after a 6-5 win.

Homan, Emma Miskew, Joanne Courtney and Lisa Weagle raced to one another and wrapped their arms around each other and held on tight. A crowd of 7,490 people roared as they all continued to hug.

“It’s something I could have never dreamt of when I was little. In our hometown, we couldn’t have written a better story,” Homan said after the game.

Homan had been inside the Canadian Tire Centre so many times before Sunday’s final.

She grew up watching Senators games, concerts and even saw one of Gord Downie’s last concerts inside the big building, which is about ten minutes down the road from her home.

But never before had she stepped into the building for a moment so big with so much at stake.

On Sunday afternoon, inside that same venue with friends and family watching, Homan fulfilled her Olympic dream.

Team Homan rented a home to stay at together all week in Ottawa. Every morning throughout the round robin, the skip would cook the rest of the team breakfast.

That didn’t change for championship Sunday.

“She cooked us eggs like she always does,” Weagle said. “Then we played some trivia and just tried to take our minds off the game.”

The Homan team has worked extremely hard on the mental aspect of their game. Their coach, Adam Kingsbury, was brought in specifically to help them become more confident and focused when the pressure grew.

So when it came to sticking to their routine when it mattered most, they stuck to the plan.

“I don’t think we were different today,” Homan said. “We were the same team. We just kept going with what was working.”

It wasn’t easy though. 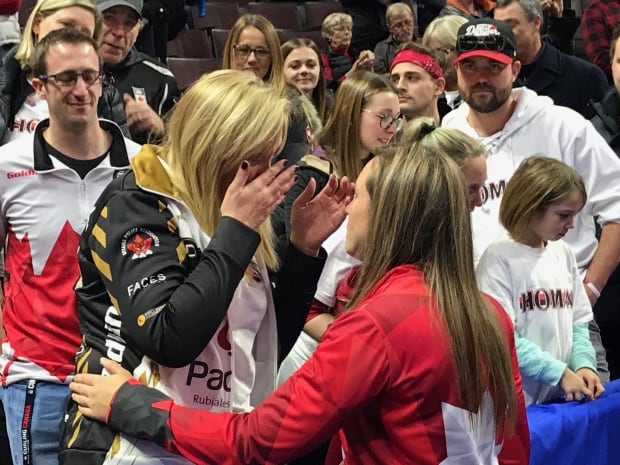 Rachel Homan is greeted by family after winning the Roar of the Rings on Sunday. (Devin Heroux/CBC Sports)

Homan started the game with back-to-back steals but Carey just kept chipping away. She was able to cut the Homan lead to 3-2 at the midway point of the championship. However, Homan scored two more in the 6th to go up 5-2.

The teams continued to go back and forth. Homan was forced to a single in the 9th end, setting up a dramatic finish while leading 6-4. Carey had a shot in the last end to score two and tie the game but just missed it.

Through adversity to the stars

Homan burst into tears when she finally reached her family after the game. One after another they hugged. Her dad Craig Homan basked in the moment with his daughter, who is now an Olympian.

“I just told her that I was proud of her and a bunch of ‘I love yous’. Then I just held her because she started to cry. She doesn’t really like to be seen crying,” he said.

But there was someone missing from the celebration. Her grandfather, Gerry Homan, helped spark her curling dream.

Per ardua ad astra is etched on Homan’s sliding foot – which in English translates to “through adversity to the stars.”

It’s meaning is no doubt loaded with significance. It’s the motto of the Royal Canadian Air Force. Gerry was a navigator with the RCAF. 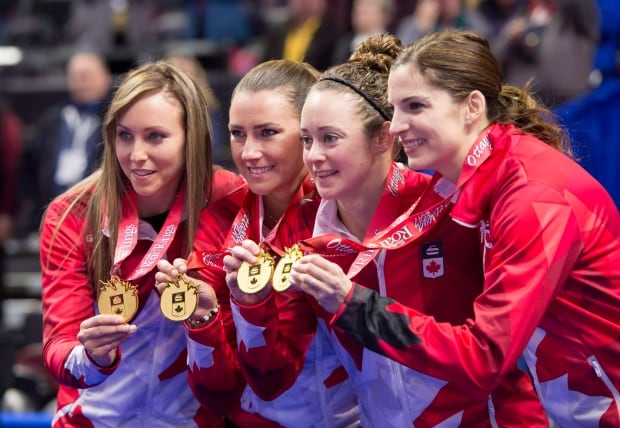 “It’s significant of my entire family and curling and how it all ties together. It means a lot to me. Family is huge and really important to me and that’s where it comes from,” she said.

Gerry Homan died on April 1, 2011 at the age of 79. He was an avid curler throughout his entire life and Rachel Homan’s biggest fan. Gerry was able to watch his granddaughter’s first-ever Scotties just a couple of months before he died.

Homan says he was with her today.

“That motto is with me always and he’s with me always,” Homan said. “A lot of people helped us get here. We couldn’t be more grateful for everyone who has been on this journey with us.”