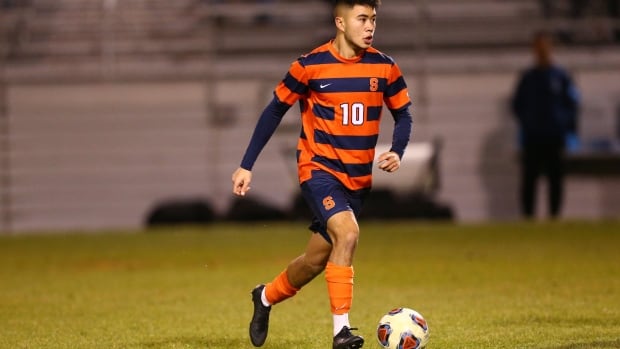 Canadian Ryan Raposo has a chip on his shoulder going into Thursday’s MLS SuperDraft.

Growing up, the Hamilton native was labelled “too small, too skinny and couldn’t get around the field fast enough for some coaches’ liking.” He joined the Toronto FC academy at 11, only to be released less than two years later — which just added to his desire to prove doubters wrong.

The Syracuse University midfielder turned heads this year by setting school records for most points (37) and goals (15) by a sophomore.

“It’s definitely been a long road,” said Raposo. “My family and I are excited for the next step. Obviously I know it’s going to be even more work now, which is fine.”

“My priorities have stayed the same ever since I can remember,” he added. “I’ve always wanted to be a pro footballer. That’s never changed once for me.”

The 20-year-old Raposo, along with fellow Canadians Alistair Johnston and Dayonn Harris, have drawn attention heading into the draft.

Johnston, a 21-year-old from Aurora, Ont., is a midfielder converted to a right back at Wake Forest. Harris, 22, is a pacey forward from Milton, Ont., who played at Penn State and most recently UConn. All three have had some exposure to the Canadian youth program.

The three are friends from their club days. They played for Vaughan SC and were part of the Vaughan Azzurri team that lost on away goals to HFX Wanderers FC of the CPL last May. Raposo scored in the opening game.

“We’re hoping that all three of them can make an impact and go in the first round and be somewhere where they’re given an opportunity to do well and show what they can do,” said a proud Patrice Gheisar, Vaughan SC’s technical director of high performance.

Off the field, Raposo learned hard work and dedication from his parents.

“Ryan’s resilience, his mental toughness, his constant belief in himself made him very special,” said Gheisar.

Raposo’s mother would get off work at 7 a.m. after a night shift at Hamilton General Hospital, go home to prepare breakfast and then drive him to practice in Toronto.

“My mum would be so exhausted she would literally drive to Lamport Stadium and just pass out, fall asleep,” Raposo recalled. “I’d go in, train, come out and just knock on the window for her to wake up, hop into the van and then drive back to Hamilton.”

“It’s been like that for years now,” he added.

Raposo ranked seventh in U.S. collegiate ranks in 2019 in points (37), ninth in points per game (1.85), 11th in goals (15) and 14th in goals per game (0.75). He recorded five or more points in a game five times, including an eight-point performance with three goals and two assists in an 11-0 win over Morrisville in October.

He switched to a No. 10 role last season from the wing. Syracuse coach Ian McIntyre calls him a dynamic, exciting attacker who can torment defenders.

Raposo says his favourite position is out wide. He is willing to do what’s needed, however.

“He was terrific for us in both years, scored some big goals in big games for us,” said McIntyre.

“What I love about him is his mentality. He’s a winner. He’s always looking to make something happen and he has that kind of drive and aggression that will translate well to the professional level as well,” he added.

While no behemoth today — he’s listed at five foot seven and 145 pounds — Raposo is not afraid to throw his weight around in 50-50 challenges. And he knows the way to goal, both for himself and others.

Raposo is quick to point out teammate Massimo Ferrin, a forward from Mississauga, Ont. for helping him succeed at Syracuse.

“One of my favourite teammates ever … A guy that does not get enough credit, for sure,” said Raposo, who has European experience having trained with Hoffenheim, Mainz and Sandhausen in Germany.

The first two rounds of the draft go Thursday with the third and fourth taking place via conference call on Jan. 13.

Inter Miami CF has the first and third overall picks with fellow expansion side Nashville SC going second. Montreal will be the first Canadian team to pick, with the fourth overall selection while Vancouver chooses ninth.

Thanks to a trade with the Los Angeles Galaxy involving allocation order, Toronto FC has two first-round picks: the 19th and 25th.

The league offered a peek in late December at who might go high by signing six players to contracts ahead of the draft.

Harris, meanwhile, joined Raposo and some 38 other players at the MLS College Showcase in mid-December in Raleigh, N.C. Raposo scored in his scrimmage and interviewed with nine MLS teams including Montreal.

Raposo’s bid to impress college recruiters was hampered by a bad leg break suffered in December 2016 in a game for Vaughan SC against Sigma FC. McIntyre was at the game and was one of the few coaches to reach out to him.

“The broken leg really set me back” said Raposo, who only got a partial scholarship his first year at Syracuse.

Bono is a goalkeeper with Toronto FC while Buchanan is a forward with New England.

Toronto FC has two picks in the first round

The importance of the MLS draft has changed in recent years with Philadelphia trading all five of its 2019 selections to FC Cincinnati for US$ 150,000 to $ 200,000 in general allocation money, depending on performance.

The first day of the 2020 draft is being aired digitally, with ESPN in charge of the show.

Toronto has six picks overall, two in the first round (19th and 25th), two in the second (33rd and 51st) and one each on the third (77th) and fourth (103rd). The 33rd pick is compensation from Columbus for GM Tim Bezbatchenko switching teams.

Montreal has four selections, one in the first round (ninth overall) and three in the third (56th, 60th and 61st). The first two picks in the third round came via trades with Vancouver (for goalkeeper Maxime Crepeau) and Houston (in exchange for defender Chris Duvall).

Vancouver has a pick in each of the four rounds (fourth, 32nd, 55th and 82nd). The second and third-round picks came in trades with Sporting Kansas City and FC Cincinnati, respectively.