Court filings on Friday in cases that stemmed from a federal probe into Russian activities during the 2016 presidential election pointed to potential problem areas for Trump, including whether he instructed six-figure payments to two women during the campaign to keep quiet about affairs.

Federal prosecutors sought prison time for longtime Trump "fixer" Michael Cohen for paying off an adult film star and a former Playboy model at Trump's behest, evading taxes and lying to Congress about a proposed Trump Organization building in Moscow.

If the payments are proven to be felony campaign finance violations, Democratic U.S. Representative Jerrold Nadler told CNN those would be grounds for impeachment.

"Well, they would be impeachable offences. Whether they are important enough to justify an impeachment is a different question," said Nadler, who will lead the Judiciary Committee when Democrats take control of the House of Representatives in January.

Under U.S. law, campaign contributions, defined as things of value given to a campaign to influence an election, must be disclosed. Such payments are also limited to $ 2,700 US per person.

The White House did not immediately return a request for comment. Press secretary Sarah Sanders said on Friday that Cohen has lied repeatedly and that the filing was insignificant. 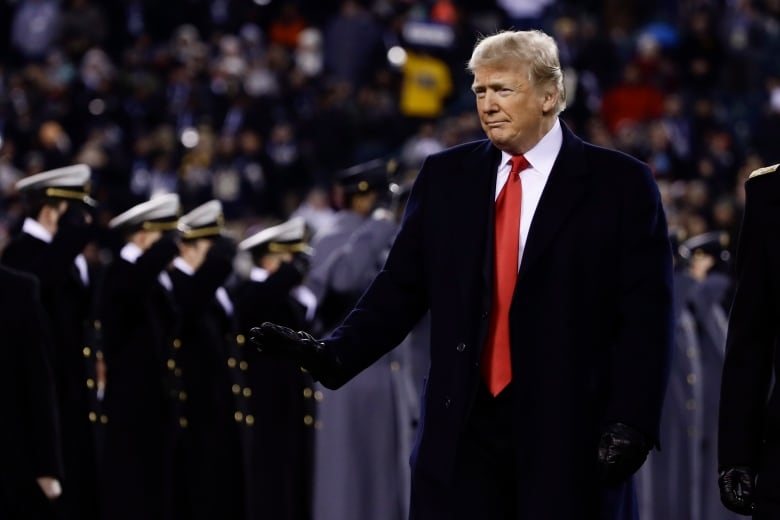 U.S. President Donald Trump crosses the field after the first half of an NCAA college football game between the U.S. Army and the U.S. Navy on Dec. 8. (Matt Rourke/Associated Press)

"I think what these indictments and filings show is that the president was at the centre of a massive fraud — several massive frauds — against the American people," Nadler told CNN.

Mueller is investigating Russian interference in the 2016 presidential election and whether Trump's campaign colluded with Moscow to sway the election. Russia denies interfering in the 2016 election and Trump has denied any collusion occurred.

The investigation has cast a shadow over Trump's presidency with its implication Moscow may have had a hand in his White House victory. The Republican president repeatedly has expressed his impatience with the probe that Mueller took over in March 2017, saying it was politically motivated.

Trump said the filings did not prove any collusion with Russia and called for an end to the investigation.

However, the end of the Mueller probe could be the beginning of bigger problems for Trump.

"There's a very real prospect that on the day Donald Trump leaves office the Justice Department may indict him, that he may be the first president in quite some time to face the real prospect of jail time," Rep. Adam Schiff, the Democrat who will lead the House Intelligence Committee next year, told CBS's Face the Nation.

Legal experts are divided over whether a sitting president can be charged with a crime, as well as on whether a violation of campaign finance law would be an impeachable offence.

Republican Senator Rand Paul warned against over-criminalizing campaign finance violations, telling NBC's Meet the Press that errors in disclosures should be punished with fines, not jail.

Republican Senator Marco Rubio told CNN he was waiting for the results of the Russia investigation and related federal probes. However, he cautioned that "no one should be above the law."

Rubio said it would be a "terrible mistake" if Trump pardoned Manafort, saying that "could trigger a debate about whether the pardon powers should be amended."

Trump has not ruled out a pardon for Manafort, praising him as a good man. In contrast, he has said Cohen, who has co-operated with federal prosecutors, should go to jail.

Schiff said Trump may end up needing to seek a pardon for himself from the next U.S. president. House Democrats have promised an array of investigations into Trump's activities.