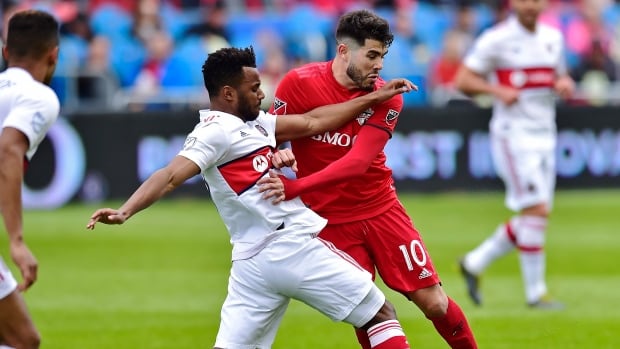 Omar Gonzalez had a goal and an assist to help Toronto to a 2-2 tie with the Chicago Fire on Sunday.

Toronto (12-10-11), which has already qualified for the post-season, can clinch a home game in the knock-out round with a win, and losses by New York and D.C. United, in next Sunday’s regular-season finale.

Chicago (9-12-12), which had its three-game unbeaten streak snapped, was eliminated from playoff contention.

Gonzalez headed home a corner kick Alejandro Pozuelo in the 80th minute to make it 2-2.

Jozy Altidore gave Toronto a 1-0 lead in the 59th, stumbling after contact with a defender and then rolling a shot from the top of the area through the legs of goalkeeper Kenneth Kronholm.

Aleksandar Katai ran onto through ball by Przemyslaw Frankowski behind the defence on the left side and rolled a shot between defender Gonzalez and goalkeeper Quentin Westburg to tie it in the 68th minute and Fabian Herbers headed home a cross by Nicolas Gaitan to give the Fire a 2-1 lead in the 77th.