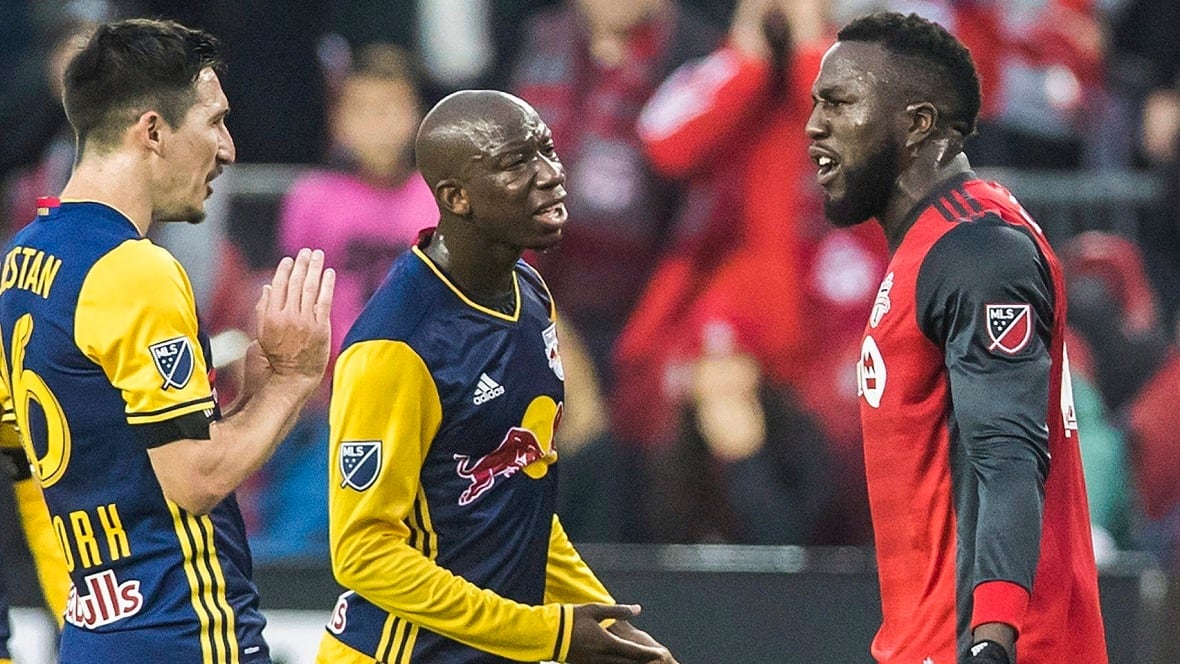 Toronto lost the ill-tempered affair 1-0 but still advanced to the conference final against Columbus on the away-goals rule after the Red Bulls series finished tied 2-2 on aggregate.

“You can probably tell I’m still annoyed at the game,” said Vanney, looking anything but his normal zen-master self.

Tensions boil over at halftime

A flashpoint between Toronto’s Jozy Altidore and New York captain Sacha Kljestan in the 34th minute spilled into the BMO Field tunnel at halftime with both players being red-carded for violent conduct.

A glass wall separates members of the public in the nearby Tunnel Club, so there were plenty of witnesses.

Fan video of the halftime confrontation shows a mass of surging, shouting, pushing bodies filling the tunnel that leads to the home dressing room. The Red Bulls are supposed to turn left to go down a corridor that leads to their locker-room while Toronto heads straight to get to theirs.

For some reason, Red Bulls staff and players kept going up the tunnel and the melee ensued.

“As it started happening, so many people started coming in,’ said Toronto defender Nick Hagglund. “I felt like there was more than team [personnel], I felt like there were fans, there might have been police guys, security, it was just kind of a jumble of everyone.”

Altidore and Kljestan had clashed some 10 minutes earlier after Toronto striker Sebastian Giovinco took down Red Bulls midfielder Tyler Adams with a poor tackle. When Adams got up and confronted the Italian, Altidore rushed to his teammate’s defence.

That led to an altercation between Altidore and Kljestan with the Red Bulls captain giving Altidore a shove. The burly TFC forward fell somewhat theatrically to the ground and both players were issued yellow cards.

The half ended with Altidore making contact with a Red Bulls player, prompting fourth official Silviu Petrescu to run on the field in a bid to head off any further incidents. That did not go down well with Altidore who had words with the official as he was waved off the field.

Vanney also thought Petrescu’s actions had escalated matters instead of cooling things down.

Vanney spoke briefly to Altidore before the forward left the field, reminding him to stay focused on the task at hand. The TV broadcast shows a clearly wound-up Altidore heading inside followed by a smirking Kljestan. Then mayhem ensued under the stadium.

Toronto said Altidore was swarmed in the tunnel. Kljestan had a different version, saying Altidore shoved him into the wall.

Altidore was away on a personal matter and was unavailable Monday — his 28th birthday. But in an interview during Sunday evening’s Raptors game, he apologized for his actions while saying he had to defend himself.

He made his feelings clear on social media with a post saying “Toronto vs. Everybody.”

Toronto is appealing Altidore’s red card and team president Bill Manning said he is confident that security camera footage of the tunnel incident will vindicate his player.

Manning said there were five security guards and three police officers around the tunnel area.

“That should suffice but essentially a group of Red Bulls players came into the TFC space and pushed through security and police officers,” Manning said in an interview. “It was literally a numbers game.”

Manning said the Red Bulls players were “out of line” for venturing up the tunnel into Toronto’s space.

“We think the security footage speaks for itself,” he said.

That footage is being sent to the league along with summaries from the security guards present.

Asked if the Red Bulls were out to antagonize his star players, Manning replied: “It seemed that way.”

He also said that was part of the game and Toronto could have done a better job of controlling its emotions.

Giovinco looms large on that front. He earned a one-game suspension with 10 minutes remaining when he received a caution for dissent, his second yellow card of the series.

“I think the most egregious thing to take away from it was that their whole team, for the most part, was in our tunnel outside of our locker-room,” said Morrow.

“In sports these things happen. Games get physical, it gets emotional. Fights break out … but they shouldn’t be in our tunnel and I think they instigated it in that sense.”

Toronto plays Columbus next, with Game 1 in Ohio on Nov. 21.