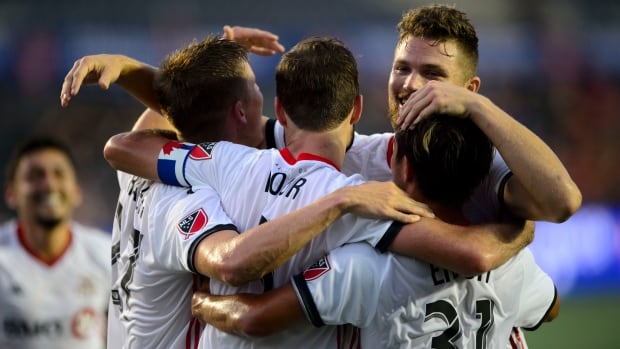 Drew Moor and Tsubasa Endoh scored as Toronto FC went on the road Wednesday and took the opening leg of the Canadian Championship semifinal with a 2-0 win over the Ottawa Fury.

The second leg will be played at BMO Field in Toronto Aug. 14 with a berth to play for the Voyageurs Cup on the line, as well as a berth in the 2020 CONCACAF Champions League.

Moor scored in the 30th minute. Erickson Gallardo had a great opportunity to increase that lead in the 87th minute but he was turned aside on a nice stop by Fury ‘keeper Callum Irving.

Endoh scored in extra time to give Toronto two away goals.

Chris Mannella had a great chance to tie the game for the Fury in the 65th minute but his shot was knocked wide by a diving Alex Bono in the TFC goal. Moments later Carl Haworth had a free kick from five yards outside the box but his shot went over the bar.

TFC had three great chances in the opening minutes but were unable to break through.

Marky Delgado fired a shot over the bar from inside the box in the second minute just seconds before Patrick Mullins found himself closing in alone on Irving after sneaking between two Fury defenders, but his shot went wide.

Toronto FC defeated Ottawa 2-0 in the first leg of the Canadian Championship semifinals. 0:19

In the fourth minute Irving made a big stop off Endoh, who again got behind the Fury defence for a quick strike.

The Fury got their early-game jitters out of the way and had two great chances of their own midway through the half.

Haworth was awarded a free kick in the 23rd minute but his shot was wide of the target to the left..

In the 27th minute Bono made a save off an attempt from Christiano Francois, who was in alone after out running a pair of TFC defenders.

Moor broke through with the game’s first goal as he used a scissor kick at close range off a corner following a corner from Endoh.

TFC defenders Justin Morrow Eriq Zavaleta both received yellow cards during the match in the 20th and 49th minutes, respectively. Fury midfielder Wal Fall was issued a yellow card in the 79th minute

Sergio Camargo scored a crucial away goal for Calgary’s Cavalry FC in the second half, breathing new life into the tournament for the Canadian Premier League spring champions. Goalkeeper Marco Carducci made seven saves.

The second leg will be played Aug. 14 at the 6,000-seat Spruce Meadows in Calgary.

Coming off a 6-3 loss versus the lowly Colorado Rapids in MLS, Impact coach Remi Garde was determined to give the 12,665 fans at Saputo Stadium something to cheer about by starting regulars Piatti, Maxi Urruti and Lassi Lappalainen.

A bad giveaway by Cavalry led to the game’s opening goal in the 32nd minute as Urruti poked the ball away from a nonchalant Julian Buscher right into Piatti’s path. The Argentine weaved around defender Mason Trafford and fired an unstoppable shot into the top corner of the net.

Montreal doubled its lead in the 49th minute when a low cross from defender Bacary Sagna evaded three Cavalry players to find Piatti alone at the far post.

Despite playing with 10 days of rest, Cavalry could hardly compete with the Impact until their goal against the run of play. Montreal outshot the visitors 9-1.

Ignacio Piatti scored both goals for Montreal in a 2-1 victory over Cavalry FC in the first leg of the Canadian Championship semifinals. 0:32

On a complete defensive breakdown for Montreal, Camargo found himself all alone in the box and pulled a goal back in the 69th minute. Impact goalkeeper James Pantemis had no chance on the play.

The visitors were reduced to 10 men two minutes later when captain Nikolas Ledgerwood was shown a second yellow card for a tackle on Samuel Piette, who was back in the lineup after missing four games with an intercostal injury.

The Impact improved to 8-0-5 all-time at home in the Canadian Championship.

Montreal punched its ticket to the semifinal by defeating CPL club York9 FC 3-2 on aggregate in the quarterfinal. Cavalry became the first CPL team to defeat an MLS squad when they eliminated the Vancouver Whitecaps 2-1 on aggregate.

The winner meets either the Ottawa Fury or Toronto FC in the final next month.

It was a busy day for the Impact, who made three moves at the MLS summer trade deadline day.