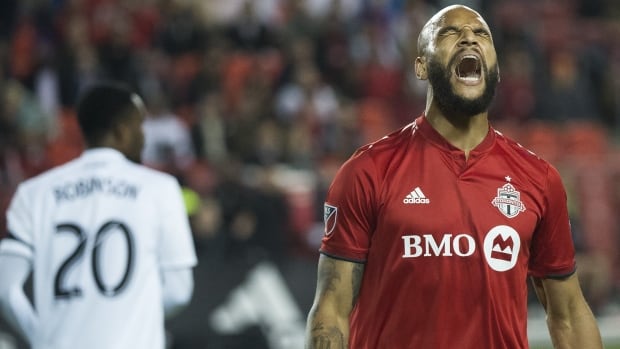 Toronto FC dominated D.C. United, peppering goalkeeper Bill Hamid with shots from all angles, but had to settle for a disappointing 0-0 tie Wednesday night.

D.C. United (7-3-3) defended tenaciously while Toronto, missing injured striker Jozy Altidore, struggled for the right final touch in outshooting the visitors 35-3 (13-2 in shots on target) before an announced BMO Field crowd of 26,116. The MLS record for most shots by one team in a game is 38.

WATCH | TFC pour it on but can’t solve Bill Hamid:

Toronto (5-4-2) controlled the play, outshooting D.C. 20-2 (7-1 in shots on target) in the first half but could not score despite 78.9 per cent possession. The 20 shots represent a club record for a half (previous mark was 17), but bottom line was it did not produce a goal.

It marked only the second time an MLS team has registered 20 or more shots in the first half (the MetroStars had 22 in June 1998 against Tampa Bay), according to the Elias Sports Bureau.

The league record for shots in a half is 23 (by Sporting Kansas City against Vancouver in the second half in April 2018).

Toronto, now winless in three games (0-2-1), had totalled just four shots on target the previous two games. And it collected just one point in its last three home games.