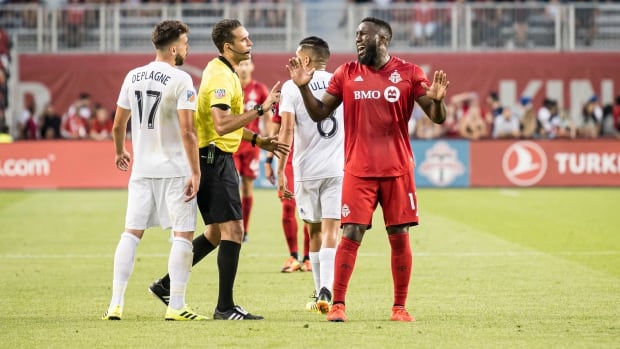 With Toronto up 1-0 at the half, Altidore capped off a counter-attack in the 50th minute when he curled a terrific right-footed shot from outside the penalty box past a diving Przemyslaw Tyton.

It was Altidore’s ninth goal in 13 games this season. And it seemed to spark Cincinnati, which quickly answered the bell before an announced crowd of 25,765 at BMO Field.

Emmanuel Ledesma cut the lead to 2-1 in the 58th minute with a low, hard shot that beat Quentin Westberg. But Toronto held out for the win.

Nick DeLeon opened the scoring for Toronto in the 16th minute, using his head to flick home Omar Gonzelez’s header off an Alejandro Pozuelo corner past the six-foot-five Tyton. It was the fifth of the season for DeLeon, who assisted on Altidore’s goal.

Jozy Altidore scored a beautiful strike early in the 2nd half of Toronto FC’s 2-1 victory over FC Cincinnati 1:02

For the visitors, it was another painful night at the office. Cincinnati has lost three straight, nine of its last 11 (2-9-0) and has taken just 10 of the 57 points available in its last 19 games (3-15-1). Mired at the bottom of the standings, the visitors have the worst defence in MLS having leaked 53 goals.

Toronto (9-9-5) was coming off a 3-1 loss to visiting Houston and had won just three of its last 14 outings (3-7-4). Making eight changes from the diluted starting 11 against the Dynamo, coach Greg Vanney fielded a far stronger group with both Pozuelo and veteran defender Drew Moor returning from injury.

The home side dominated play early, stringing together passes in lengthy attacks. Cincinnati wasn’t credited with a shot until the 37th minute but only trailed 1-0 at a half that saw 60 per cent possession for Toronto.

The first-ever meeting of the clubs marked a return to BMO Field for Cincinnati defender Nick Hagglund, who was drafted by Toronto and spent five seasons here before being traded to his home town team in January.

Saturday’s game was also the first of eight straight against Eastern opposition for Toronto, which started the day one point out of the seventh and last playoff spot in the Eastern Conference.

Lassi Lappalainen, in his Major League Soccer debut, and Orji Okwonkwo each scored twice to give the Montreal Impact a commanding 4-0 victory over the first-place Philadelphia Union on Saturday night.

Evan Bush made three saves for his seventh clean sheet of the season as the Impact (10-11-3) snapped a four-game losing skid in league play with their biggest win of the season.

The Impact were winless since June 26 and had only scored four goals on their four-game slide. But they managed to put four past Andre Blake in captain Ignacio Piatti’s first MLS game since May 24.

It didn’t take long for Finnish winger Lappalainen — on loan from Bologna — to bring the 16,344 fans at Saputo Stadium to their feet.

Lassi Lappalainen connected on a pair of goals in his MLS debut to help the Montreal Impact fly past the East-leading Philadelphia Union 4-0. 1:21

Just four minutes into his first MLS game, the speedy Lappalainen made a run into the box behind a Philly defender and snagged a perfectly weighted through ball from Zachary Brault-Guillard. Lappalainen’s first touch evaded the diving Blake, and his second touch was an easy tap-in into the back of the net.

The entire Impact team swarmed the Finnish international at the corner flag to celebrate.

Just 16 seconds into the second half, Lappalainen netted his second of the match to give Montreal a 3-0 lead. The 20-year-old blew past the Philly defence, walked into the box and placed a shot into the bottom far corner of the net.

With the Union playing a high line, a back kick by Maximiliano Urruti in the 66th minute sent Okwonkwo in all alone on goal with no Philadelphia defender nearby. The winger made it 4-0 with a low shot from near the penalty spot.

Vito Mannone had five saves for his seventh shutout of the season to help Minnesota United hold on for a scoreless draw with the Vancouver Whitecaps on Saturday night.

Maxime Crepeau had one save for his fourth shutout of the season for Vancouver, which snapped a five-game losing streak.

Mannone denied Yordy Reyna’s volley in the 53rd minute and made a diving save for Minnesota (10-7-5) in the 65th minute.

Minnesota United’s Angelo Rodriguez nearly gave the Whitecaps (4-11-9) the lead with a narrowly avoided own goal in the 19th minute when he redirected Ali Adnan’s free kick off the crossbar.

Neither the Whitecaps or Minnesota United could find the back of the net in their 0-0 draw. Vancouver pick up their 1st point in a match since June 26th. 1:04