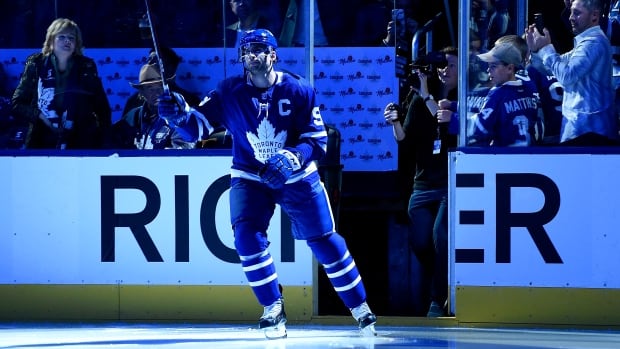 John Tavares said recently when he used to dream about playing for the Toronto Maple Leafs there wasn’t a ‘C’ on his jersey.

Just being on the ice in blue and white was enough.

Now the 29-year-old has surpassed even his own childhood expectations.

Tavares was named the 25th captain in franchise history Wednesday during the pre-game ceremony before the NHL season opener against the Ottawa Senators, filling a role that had been vacant for more than 3 1/2 years.

The product of nearby Oakville, Ont., was the last of his teammates to step onto the ice at a raucous Scotiabank Arena, saluting the crowd with his stick.

“I think he was a great choice,” Leafs general manager Kyle Dubas said during a first-intermission press conference. “But I think one of the major benefits that we had was that we had a number of candidates for the position, and we were able to go through each player.

“It was legitimately a case where we felt we had a number of players that could carry that honour. In the end, we just decided as a collective group that John fit the role the absolute best at this time.”

Tavares, who scored a career-high 47 goals and 88 points in 2018-19 with the Leafs, said last week it would be a “special honour” to be named captain.

WATCH | Where do the Leafs stand among Canadian NHL teams?

“We know about the history, the tradition and what it would mean to the city and the fan base,” said the first pick in the 2009 NHL draft. “It’s not something you can ever take for granted, but at the same time I don’t think you want to change who you are.

“You just want to continue to just try to be better every day.”

In 751 career games with New York and Toronto, Tavares has 319 goals and 709 points to go along with 27 points (13 goals, 14 assists) in 31 playoff games. He signed a seven-year, $ 77-million US contract with the Leafs some 15 months ago after nine seasons with the Islanders.

Dubas said the Leafs informed Tavares and his family of the decision on Monday.

“It was a nice moment,” Dubas said. “It was great to be able to share it with them.”

Matthews and Rielly were viewed as the other candidates for the Leafs’ captaincy, which Dion Phaneuf held from June 14, 2010, until he was traded to the Senators on Feb. 9, 2016.

There was debate in Toronto last week whether or not Matthews was still suitable for the role after news broke that he’s facing a charge of disorderly conduct and disruptive behaviour stemming from an alleged incident — which he failed to disclose to the team — in his hometown of Scottsdale, Ariz., back in May.

Dubas said the allegation, which hasn’t been proven in court, didn’t play a role in the captaincy decision.

“This was exactly what we had and what we had discussed well before that,” the GM said. “It didn’t it didn’t affect our decision making whatsoever.”

Toronto head coach Mike Babcock said before Wednesday’s game that the team’s brain trust wanted to be 100 per cent certain of its choice.

“In the end we made the right decision for the Leafs.”