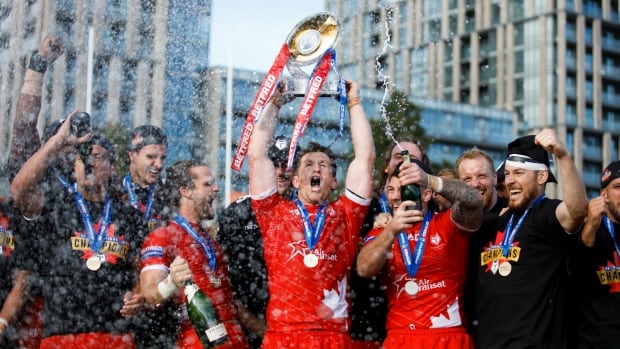 The Toronto Wolfpack won promotion to the top-tier Super League on Saturday, rallying for 20 second-half points in a 24-6 comeback win over Featherstone Rovers in the Million Pound Game.

Featherstone gave Toronto all it could handle and for a while it looked like the Wolfpack might fall at the last promotion hurdle for the second year in a row. But the transatlantic rugby league team kept coming and ran away in the final 25 minutes.

Toronto trailed 6-4 at the half, but took the lead in the 57th minute when Blake Wallace crashed over the line for a 10-6 lead with the conversion. A penalty against former Toronto forward Jack Bussey helped the Wolfpack drive.

Five minutes later, Bodene Thompson ran through the Featherstone defence to stretch the lead to 16-6 with the conversion. Joe Mellor added an insurance try in the 70th with Wallace kicking a penalty in the 80th minute.

The visitors pressed but the Wolfpack defence stood strong.

The Betfred Championship Grand Final pitted the fully professional Wolfpack, whose roster is small but star-studded, against the part-timers of Featherstone, a club whose story dates back to 1902.

The lowest-ranked of the five teams to make the playoffs, Featherstone part-timers arrived on the back of three straight wins on the road — defeating No. 4 Leigh Centurions (34-18), No. 3 York City Knights (30-4) and No. 2 Toulouse Olympique (36-12).

Toronto began life in 2017 in the third-tier League 1 — the first step on its journey to Super League. After winning promotion to the Championship after that first season, it fell short in last year’s promotion showdown in a tense 4-2 loss to London Broncos.

Saturday’s match determined the Super League replacement for the Broncos, relegated on points difference after a 10-19-0 season.

The reward? A place alongside the elite of Northern Hemisphere rugby league alongside 10 English and one French team.

The two teams ran at each other in a high-paced opening that featured stiff defence from both sides. The Wolfpack passed up a penalty kick at goal in the 21st minute to go for the try but failed to turn the opportunity into points.

Featherstone endured some early Toronto pressure, its defensive line almost broken after an Andy Ackers line break in the 18th minute. But the visitors’ defence held.

The breakthrough came in the 28th minute when Liam Kay, caught in two minds about where the ball was going, failed to handle a deft Chisholm grubber kick sent into the end zone. Kay failed to bat the ball out and Sutcliffe grounded it for the try.

Toronto hit back quickly with McCrone bulling his way over with several defenders on his back to cut the lead to 6-4 in the 32nd.

Early mistakes slowed down the Toronto attack in the second half. Featherstone, meanwhile, kept grinding.

The Wolfpack entered Saturday’s showdown having won 22 straight games since a 46-16 loss in Toulouse on March 9. Featherstone had won three in a row and seven of its last nine since the July loss in Toronto.

The Wolfpack’s lone loss this season was a 46-16 setback March 9 in Toulouse. Toronto sealed the League Leaders’ Shield as regular season champion on July 21 with a victory over Widnes.

The game drew an announced sellout crowd of 9,974 — a Wolfpack record — on a brisk, windy fall afternoon at Lamport Stadium. The previous record was 9,562 — the highest single-game attendance for any Championship game — set during the April home opener against Swinton.

Featherstone was without the injured Josh Walters. Danny Maskill replaced him in the 19-man travelling squad. Conor Carey made the team despite leaving the Toulouse game in the first five minutes after picking up an ankle injury.

Featherstone showed the game back home on a big screen at its LD Nutrition Stadium.

Toronto won two earlier meetings with Featherstone this season but both were close games — 23-14 at Featherstone in April and 22-18 in July in Toronto.

Featherstone is just one of three teams to post a win in Toronto, defeating the Wolfpack 30-12 in the 2018 regular-season finale. Toronto’s career home record in the regular season and playoffs is a remarkable 34-3-0.

Featherstone’s last brush this close with promotion was in 1998 when it lost 24-22 to Wakefield Trinity.