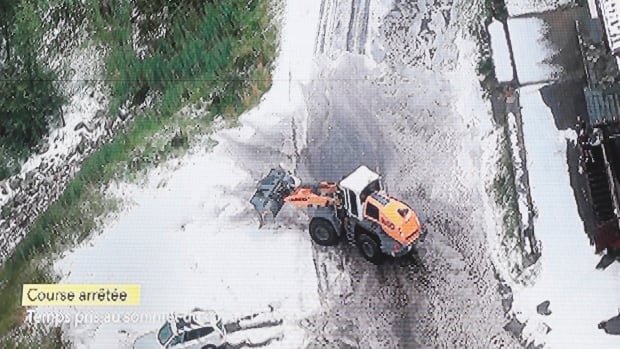 Julian Alaphilippe lost his yellow jersey in exceptional circumstances on Friday, as Tour de France organizers made the rare decision to stop Stage 19 in the Alps because of a hailstorm.

Two days before the race ends on the Champs-Élysé​​​​​​​es, Colombian climber Egan Bernal took control of the race with a tremendous attack in the punishing climb to the Col de l’Iseran, the Tour’s highest point at 2,770 metres.

Down in the valley, the sudden and violent storm made the roads too dangerous, leading governing body ASO to stop the race. Tour director Christian Prudhomme immediately announced that times would be taken at the top of the mountain, where Bernal was two minutes, seven seconds faster than Alaphilippe — enough to wipe away the Frenchman’s race lead.

The Colombian climber from the Ineos team was 1:30 behind Alaphilippe at the start of the stage.

The stoppage, which came as racers were flying through hairpin bends down from the Iseran climb, threw the race into chaos.

TV coverage showed a snowplow trying to clear the road of snowy slush, awash with streams of water and ice, as the riders were speeding toward that section of the stage.

It immediately became clear that the road was unpassable on bike, and organizers made an on-the-spot decision that the riders’ safety had to come first.