At a time when many Nova Scotians are desperate to find a family physician, one clinic says an alarming number of its patients take for granted they have access to a doctor and simply skip their appointments.

The issue comes up so often, the Duffus Health Centre in Halifax is fighting back. It's posting the total number of no-shows every month and even going so far as to fire patients who are repeat offenders.

In August, 118 appointments were missed. That's the equivalent of 41½ hours — or an entire week worth of physician appointments.

"The amount of time and resources that is spent for these people and then they don't show up, and then they wonder what's wrong with their health? That's why," said Angela Smith, the manager of the clinic.

"Then there are people who are desperate to be seen and they can't get in. It's frustrating."

That's just the no-shows with no excuse. The number doesn't include those who cancel, or who offer an acceptable explanation for their absence.

"When you hear on the news all the time that people are crapping on the government, crapping on the doctors, the patients have to take responsibility," Smith said. "People have to be accountable for their own health. They have to start recognizing that they're part of the problem." 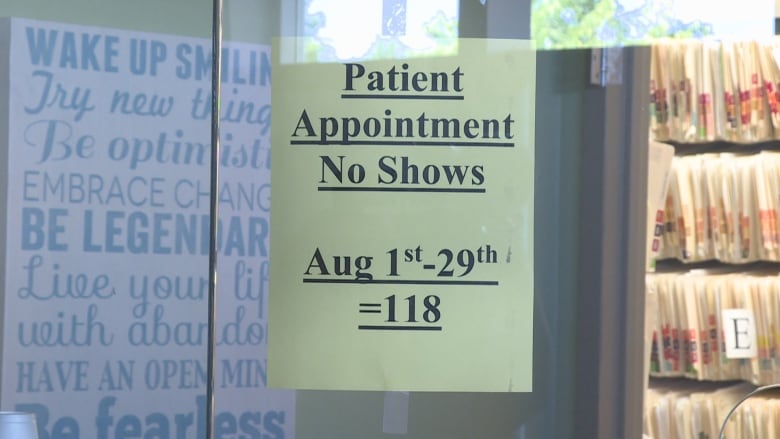 The number of appointments missed in August is actually a drop from the month before. July saw 133 missed appointments at the clinic.

The Duffus Health Centre has 10 physicians, a social worker, two family practice nurses and a psychiatrist. Those physicians are not all full time. They also share duty at the walk-in clinic.

'Tip of the iceberg'

Dr. Andrea McDonald, a family physician at the clinic, said it's not just the Duffus Health Centre that struggles with absenteeism.

"That's just the tip of the iceberg," she said. "There's not a day that goes by that I don't receive notification for people not showing up for diagnostic imaging appointments, specialist appointments."

McDonald said she's heard a long list of excuses, from transportation issues to a busy work day. But the most common is the weather: It's snowing, raining or simply sunny.

McDonald and Smith say what's baffling is that the clinic offers a 24-hour cancellation phone line.

The truant patients cause a domino effect. If the appointments were cancelled, the doctors could treat someone on a wait-list who is anxious to get in faster than the current three-week wait. 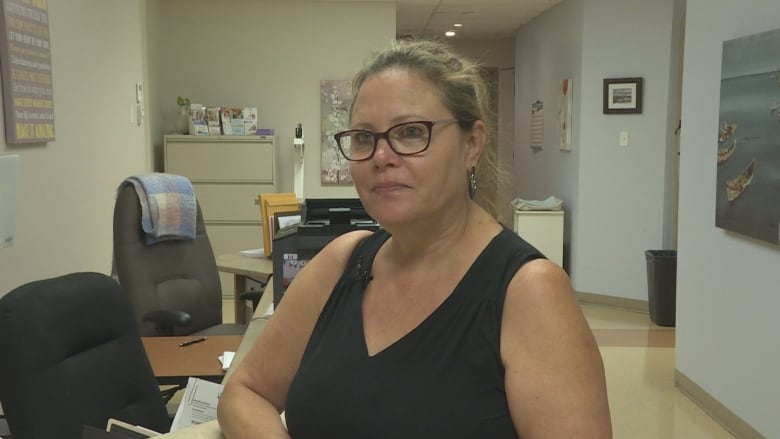 Angela Smith, the manager of the Duffus Health Centre, is so fed up with no shows she's tracking the numbers. In August, patients missed 41½ hours of appointments. (Carolyn Ray/CBC)

The staff are so frustrated they're sending warning letters to repeat offenders and dismissing those who have three strikes against them.

"That's a hard thing for a family physician to do," said McDonald. "We know these people. We understand the various factors that are going on in their life. We also are more and more recognizing the impact this has on our ability to deliver timely heath care."

What is most surprising, however, is that five of those no-shows were new patients accepted off the province's 811 wait-list.

Those patients are automatically getting the boot and have been sent back to the bottom of the list, which is now 54,915 names long.

The clinic only offers reminders for its specialty appointments, not for physician checkups.

Taking on that workload would cost the clinic financially and would take more time from already busy staff, said McDonald.

"Lots of people will say, 'You didn't remind me of the appointment.' Well, whose health care is this?" the physician said. "Put your appointment in your phone."