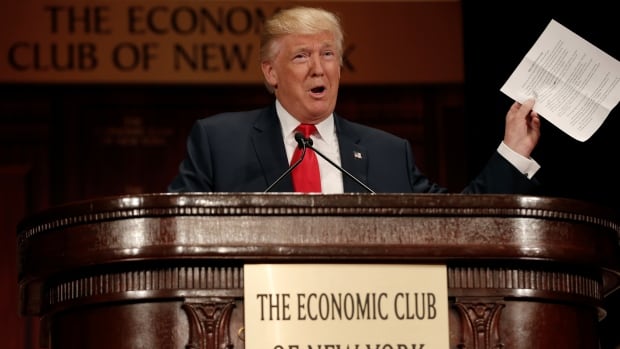 U.S. President Donald Trump on Tuesday took aim once again at the Federal Reserve for its interest rate policy in a highly anticipated speech that offered no fresh details on his administration’s long-running trade war with China.

With financial markets from frothy stocks to jittery bonds eager for word about the state of talks between Washington and Beijing, Trump instead bemoaned the fact that the United States has higher interest rates than other developed economies, and he took credit for the economy’s record-long expansion.

“Remember we are actively competing with nations that openly cut interest rates so that many are now actually getting paid when they pay off their loan, known as negative interest. Who ever heard of such a thing?” he told members of the Economic Club of New York.

The Fed has cut interest rates three times since July, but that followed a string of nine increases since late 2015. Trump has repeatedly railed against the Fed for not lowering rates even further.

Excerpts of the text of Trump’s prepared remarks, however, focused on the performance of the U.S. economy and labour market since he took office.

As Trump spoke, the benchmark Standard & Poor’s 500 Index edged down from the record high it had touched earlier in Tuesday’s trading session. It remained 0.25 per cent higher on the day.

As he often has, Trump pointed to the market’s run to a record as a validation of his economic and trade policies.

The S&P is up more than 36 per cent since Trump took office, though two-thirds of that gain occurred in his first year in the White House before his focus turned to trade and he began imposing tariffs on imports from China. Stocks have found the going far more choppy since the first wave of tariffs were imposed in 2018.

President Donald Trump on Tuesday said the United States is close to signing a “phase one” trade deal with China, adding in his speech that he will only accept a deal if it is good for his country and U.S. workers.

The latest back-and-forth between Washington and Beijing illustrate the bumpy state of play. Last week, officials from both sides said they had a deal to roll back tariffs, only to have Trump deny any deal was agreed on.

It was Trump’s second appearance at the storied club, which has hosted U.S. presidents including Woodrow Wilson and John F. Kennedy, as well as foreign leaders like former Soviet President Mikhail Gorbachev and Chinese Premier Li. He previously addressed the organization in 2016 when running for president.

More than 1,350 people were expected to attend the lunchtime speech at a midtown Manhattan hotel, according to the club’s spokeswoman, Erin Klem. The club’s membership is a virtual who’s who of New York’s financial elite, and its trustees include John Williams, president of the Federal Reserve Bank of New York, and billionaire hedge fund investor John Paulson, one of Trump’s top financial backers.

Gregory Daco, chief U.S. economist at Oxford Economics, estimated the trade war had chopped about eight-tenths of a percentage point off U.S. growth. After starting the year with growth running at 3.1 per cent, output throttled back to 1.9 per cent in the third quarter, with weak business investment factoring heavily in the slowdown.

Daco questioned whether a limited trade deal with China would be enough to draw businesses back off the sidelines.

“Do you as a business make a decision that now the environment is clearer, there are less tariffs, so now you’re more likely to invest? Or, if after the last three years, you’re still more cautious and say ‘let’s wait this one out,'” Daco said. “I’d favor the latter.”