U.S. President Donald Trump is giving himself a “10” for his administration’s response to hurricane damage Puerto Rico.

Trump made the remarks Thursday during a meeting with Puerto Rico Gov. Ricardo Rossello at the White House. The president said the federal government has done a “really great job.”

He said he has given his blessing to Congress for a funding plan, but added that the governor “understands that these folks can’t be there forever.”

Rossello said Trump “has been clear that no U.S. citizen will be left behind.”

The meeting comes after Trump received some criticism for his response to Puerto Rico after hurricanes Irma and Maria. Rossello has been supportive of Trump, while the mayor of San Juan has been outspoken in her criticism.

Many still without power, water

Maria caused as much as an estimated $ 85 billion US in damage across an island already mired in an 11-year recession.

That has complicated and delayed efforts to restructure a portion of a $ 74-billion public debt load that officials say is unpayable.

And it has thrust Puerto Rico’s territorial status into the international spotlight, reviving a sharp debate about its political future as the island of 3.4 million people attempts to recover from flooding, landslides and power and water outages. 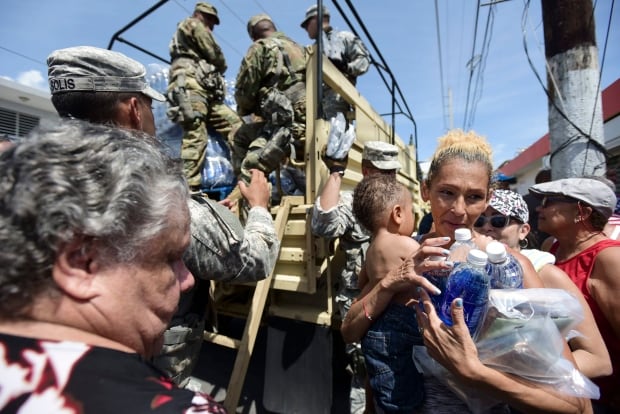 Roughly 80 per cent of power customers remain in the dark, and another 30 per cent are without water. Schools remain closed. Stoplights are not operating.

While nearly 90 per cent of supermarkets have reopened, many have bare rows of shelves empty of goods like water, bananas and canned tuna.

Nearly 5,000 people remain in shelters, with many using rainwater to shower.

Last week, the House of Representatives passed a $ 36.5 billion disaster aid package for places including Puerto Rico and the U.S. Virgin Islands, and now a group of Democratic lawmakers are pushing for tax relief, saying that people and businesses in both U.S. territories affected by Hurricane Maria receive unequal treatment compared with U.S. states.

The U.S. Federal Emergency Management Agency also has pledged more than $ 171 million to help restore power across the island, and it has distributed more than $ 5 million to municipalities in need, as well as $ 1 million to Puerto Rico’s National Guard.

Discussing with @realDonaldTrump and @WhiteHouse officials the need for additional assistance and equal treatment on recovery efforts. pic.twitter.com/R0N4d8jwcN