U.S. President Donald Trump on Friday granted a pardon to former Arizona lawman and political ally Joe Arpaio, the self-proclaimed “toughest sheriff in America,” less than a month after he was convicted of criminal contempt in a case involving his department’s racial profiling policy.

Trump had signalled this week that the first presidential pardon of his administration would go to Arpaio, 85, whom he has frequently praised for his hardline immigration stance.

The White House said the ex-sheriff of Arizona’s Maricopa County was a “worthy candidate” for a presidential pardon.

The action came several days after Trump, at a rally in downtown Phoenix, strongly hinted that he intended to issue a pardon.

“So was Sheriff Joe convicted for doing his job?” Trump asked supporters. “I’ll make a prediction. I think he’s going to be just fine, OK.”

Arpaio, who became linked with Trump during the campaign for their hardline immigration views, was convicted of a misdemeanour for intentionally defying a judge’s order to stop his traffic patrols that targeted immigrants. 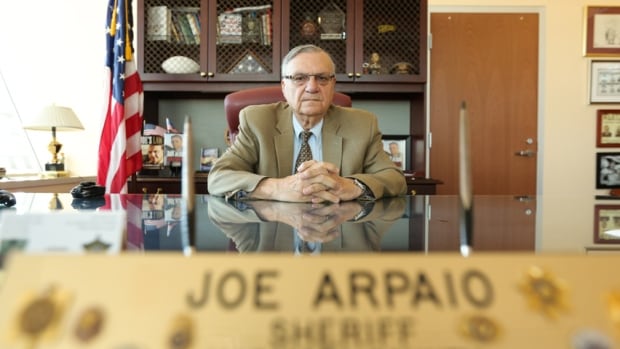 Joe Arpaio, the sheriff of Maricopa County in Arizona from 1993 to 2016, presides over his office in Phoenix in October 2016. Arpaio had been awaiting sentencing for defying court orders before U.S. President Donald Trump pardoned him.​ (Jason Burles/CBC)

Both politicians questioned the authenticity of then-President Barack Obama’s birth certificate and have a similar history in sparring with judges.

“I have to thank the president for what he has done, that’s for sure,” Arpaio told Reuters in a brief telephone interview
from his Arizona home. “He’s a big supporter of law enforcement.”

‘I’m not going away’

Arpaio said his lawyer was sent a copy of the pardon on Friday afternoon and he has scheduled a news conference to
discuss what he said were new details in the case. He declined to say if he would run again for sheriff.

“I’m not going away,” added Arpaio. 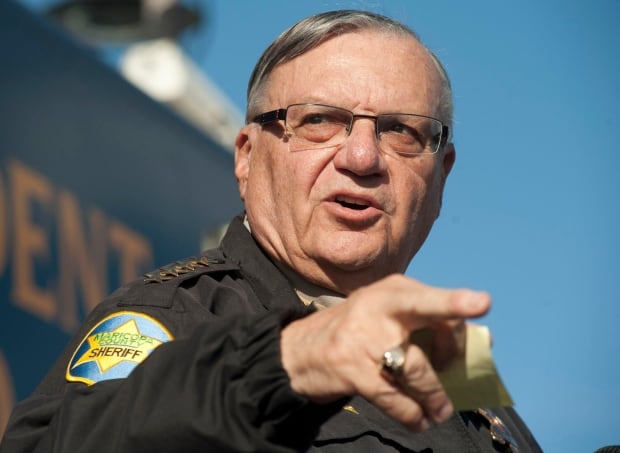 “Once again, the president has acted in support of illegal, failed immigration enforcement practices that target people of
colour and that have been struck down by the courts,” said American Civil Liberties Union deputy legal director Cecilia
Wang, who sought the court injunction against Arpaio.

Vanita Gupta, president of the Leadership Conference on Civil and Human Rights and former head of the U.S. Justice
Department’s civil rights division, said in a statement that the pardon sends “a dangerous message that a law enforcement officer who abused his position of power and defied a court order can simply be excused by a president who himself clearly does not respect the law.”

Arpaio, who campaigned for Trump in 2016, was convicted on July 31 by U.S. District Judge Susan Bolton, who ruled he had willfully violated a 2011 injunction barring his officers from stopping and detaining Latino motorists solely on suspicion that they were in the country illegally.

Arpaio admitted to inadvertently disobeying the court order but said his behaviour did not meet a criminal standard. He said the prosecution was a politically motivated attempt by the Obama administration to undermine his re-election bid.

Arpaio had been scheduled to be sentenced on Oct. 5 and faced a fine and maximum sentence of six months in jail.

His controversial tenure as sheriff brought Arpaio national headlines for massive roundups of suspected illegal immigrants and for the way he ran the Maricopa County jail.

He reinstated chain gangs, made inmates wear uniforms that were pink or old-fashioned black and white stripes and forbade them coffee, salt and pepper. 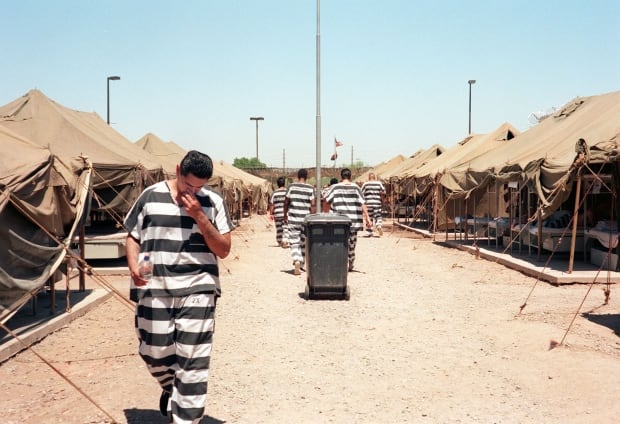 Critics said as sheriff Arpaio spent too much time courting publicity and not enough on basic policing. The East Valley
Times newspaper won a Pulitzer Prize for a 2009 series showing that arrests in the county had dropped while many violent crimes were not investigated and response call times had increased.

In the statement Friday night, the White House said, “Throughout his time as Sheriff, Arpaio continued his life’s work of protecting the public from the scourges of crime and illegal immigration. Sheriff Joe Arpaio is now 85 years old, and after more than 50 years of admirable service to our Nation, he is worthy candidate for a Presidential pardon.”

Busy night for the White House

The announcement of Arpaio’s pardon was just one of several pieces of news that came out of the White House late Friday.