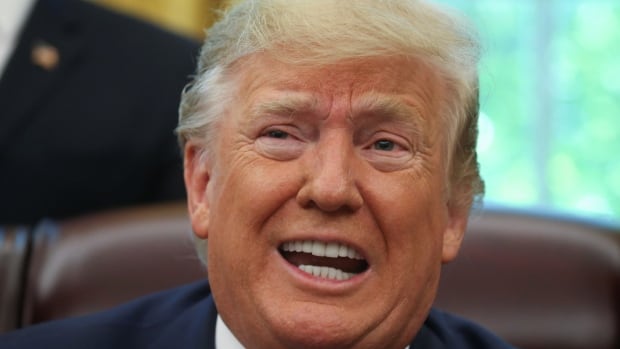 U.S. President Donald Trump renewed his attacks on a Somali-born congresswoman Friday while reversing his previous criticisms of a North Carolina crowd who chanted “Send her back,” defending them as “patriots” while again questioning the loyalty of four Democratic lawmakers of colour.

In a week that has been full of hostile exchanges over race and love of country on both sides, Trump returned to a pattern that has become familiar during controversies of his own making: Ignite a firestorm, backtrack from it, but then double down on his original, inflammatory position.

“You know what I’m unhappy with?” Trump answered when reporters at the White House asked if he was unhappy with the Wednesday night crowd. “Those people in North Carolina, that stadium was packed. It was a record crowd. And I could have filled it 10 times, as you know. Those are incredible people. They are incredible patriots. But I’m unhappy when a congresswoman goes and says, ‘I’m going to be the president’s nightmare.”‘

It was another dizzying twist in a saga sparked by the president’s tweets ​​​​​, which opponents have called racist, about Democratic Rep. Ilhan Omar of Minnesota, who moved from Somalia as a child, and her colleagues Reps. Alexandria Ocasio-Cortez of New York, Rashida Tlaib of Michigan and Ayanna Pressley of Massachusetts.

The moment took an ugly turn at the rally when the crowd’s “Send her back” shouts resounded for 13 seconds as Trump made no attempt to interrupt them. He paused in his speech and surveyed the scene, taking in the uproar, though the next day he claimed he did not approve of the chant and tried to stop it.

Watch Trump’s reaction to the chants at his rally:

U.S. President Donald Trump remained silent during chants of ‘Send her back!’ at his rally in North Carolina on Wednesday night. The following day he told reporters he disagreed with the sentiment. 0:18

But on Friday, he made clear he was not disavowing the chant and again laced into Omar, the target of the chant.

He also tweeted that it was “amazing how the Fake News Media became `crazed’ over the chant `send her back’ by a packed Arena (a record) crowd in the Great State of North Carolina, but is totally calm & accepting of the most vile and disgusting statements made by the three Radical Left Congresswomen.”

Omar was defiant Thursday, telling reporters at the Capitol that she believes the president is a “fascist” and casting the confrontation as a fight over “what this country truly should be.”

Democratic Rep. Ilhan Omar, who has been the target of attacks from U.S. President Donald Trump, responded to the chants of ‘Send her back!’ at one of Trump’s rallies. 0:29

“We are going to continue to be a nightmare to this president because his policies are a nightmare to us. We are not deterred. We are not frightened,” she told a cheering crowd that greeted her like a local hero at the Minneapolis-St. Paul International Airport as she returned from Washington.

Congresswoman Omar just arrived back in the Twin Cities. <a href=”https://t.co/ZiFqWnDJgQ”>pic.twitter.com/ZiFqWnDJgQ</a>

The back-and-forth captured the potential impacts of Trump’s willingness to inject rhetoric that has been labelled racist into his re-election fight. Trump’s allies distanced themselves from the chant, fretting over the voters it might turn off in next year’s election and beyond. Democrats, meanwhile, pointed to the episode as a rallying cry to energize and mobilize their supporters to vote Trump out of office.

Trump’s double flip-flop was reminiscent of his response to the violent clash between white supremacists and anti-racist demonstrators in Charlottesville, Va., in August 2017.

Then, he initially blamed violence on “both sides” of the altercation. After a wave of bipartisan condemnation and scathing cable news coverage, he issued a clean-up statement at the White House days later. Yet, after watching the response to his reversal, he doubled back to his original position during a wild Trump Tower news conference.

Watch Trump reassert that there’s ‘blame on both sides’ for Charlottesville:

U.S. President Donald Trump doubled down on his blame of “both sides” for the violence in Virginia, calling out the “alt-left” and equating it to the neo-Nazis on the right 3:06

This week, Trump started the tumult by tweeting Sunday that Omar and three other freshmen congresswomen could “go back” to their native countries if they were unhappy here.

The chants at the Trump rally brought criticism from GOP lawmakers as well as from Democrats, though the Republicans did not fault Trump himself.

House Minority Leader Kevin McCarthy of California declared that the chant has “no place in our party and no place in this country.”

GOP Rep. Adam Kinzinger of Illinois tweeted that it was “ugly, wrong, & would send chills down the spines of our Founding Fathers. This ugliness must end, or we risk our great union.”

Citing Trump’s rhetoric, House Democrats said they were discussing arranging security for Omar and the three other congresswomen.

Even by Trump’s standards, the campaign rally offered an extraordinary tableau for American politics: a president drinking in a crowd’s cries to expel a congresswoman from the country who is his critic and a woman of colour.

It was also the latest demonstration of how Trump’s verbal cannonades are capable of dominating the news. Democrats had hoped the spotlight Thursday would be on House passage of legislation to boost the minimum wage for the first time in a decade.