There's an old Russian saying that U.S. President Donald Trump might heed as he departs Tuesday for a week of high-level meetings in Europe, including one with a foreign foe. It goes: "Repetition is the mother of learning."

Those words may help him navigate a familiar scenario — a potentially strained meeting with allies just ahead of a tête-à-tête with a major U.S. adversary.

"Déjà vu is one way of thinking about it," said Alina Polyakova, an expert on Russian foreign policy at the D.C.-based Brookings Institution.

It was only last month that Trump travelled abroad to meet, then insult one of his country's closest allies, Prime Minister Justin Trudeau, before he departed to laud a Western adversary, North Korean dictator Kim Jong-un.

NATO members "are trying to understand what this president might do, and watching how he's interacted with other authoritarians — Kim being the most prominent recent example," Polyakova said.

"They're trying to take lessons from that."

But if it's solidarity the alliance of 29 North American and European powers is after, Trump seems comfortable playing the role of disrupter, lashing out at members over military spending while treating Russian President Vladimir Putin amicably.

Trump will enter the talks in Brussels amid an already strained relationship with German Chancellor Angela Merkel.

Last week, the White House sent missives to several NATO leaders, including Trudeau, admonishing the U.S. allies for their defence spending shortfalls, though the spending guidelines are not formal rules, only targets. 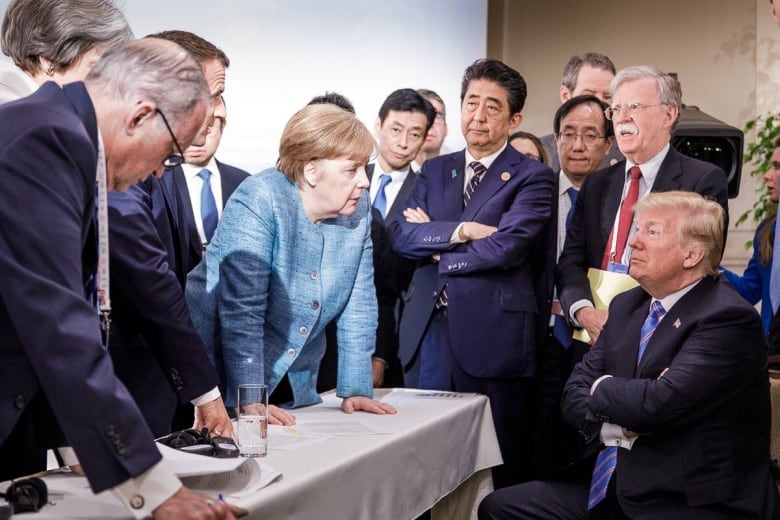 This photo of G7 leaders and advisers at the G7 summit was posted to the Instagram account of German Chancellor Angela Merkel, centre, on June 9. (Jesco Denzel/German Federal Government via AP)

Making things more awkward will be the steep tariffs the U.S. is imposing on imported steel and aluminum from the EU, Canada and Mexico.

In June, Trump departed the G7 in Quebec, then rejected a joint communiqué, in order to meet with Kim in Singapore. Now, NATO members are reportedly concerned about whether the president will renege on U.S. commitments to the alliance before his one-on-one with Putin.

The Europeans won't like the sequencing, Polyakova said, especially if a routine diplomatic affair goes off the rails, as the G7 did, leading right into a "glowing meeting of Trump and Putin."

"It's like Europe is almost powerless as they have to sit by and watch as their fates are decided by two men," she said, the implication being that Russia is back at the table with superpower status.

Putin would likely request a lifting of sanctions, she said.

Trump reportedly hinted at the G7 that Crimea in Ukraine should belong to Russia, reasoning that most citizens there speak Russian. But legitimization of Russian annexation of Crimea would be a huge win for Putin, possibly incentivizing other land grabs, said Brian Klaas, author of The Despot's Apprentice: Donald Trump's Attack on Democracy.

"It's not just about Ukrainian territory, it's about a bedrock principle that has created international security and prosperity since World War Two, and that's the principle that you can't divide by force."

The Western world is held together by NATO and the European Union, and Trump is attacking them.– Brian  Klaas , author of  The Despot's Apprentice: Donald Trump's Attack on Democracy

Alliance members worry that the U.S. would withdraw its forward presence in Baltic states such as Estonia, Latvia and Lithuania, leaving them vulnerable to a possible Russian military offensive.

If Trump was distracted during the G7 by his summit with Kim, his planned sit-down with Putin threatens to overshadow NATO discussions set to begin on Wednesday, said Klaas, a comparative-politics fellow at the London School of Economics.

"The Western world is held together by NATO and the European Union, and Trump is attacking them at the same time he's trying to make friends with Putin."

After all, he said, "NATO exists largely to deter Russian aggression."

A weakened NATO and a U.S. president who's seemingly reluctant to criticize the Kremlin "are literally what Putin's wish list has been for the last two decades."

How Trump can square his commitments to what the alliance stands for with a cozier relationship with the Kremlin will likely keep NATO members on edge. They will want reassurances from the Americans, Klaas said, and Trump campaigned in the 2016 election as a NATO skeptic.

It took Trump nearly half a year into his presidency for him to formally endorse NATO's Article 5 principle of collective defence, in which an attack on one member is considered an attack on all allies.

"I think that's up in question again," Klaas said.

Polyakova's worry, based on reports of satellite images showing ongoing nuclear activity in North Korea, is what kind of concessions Putin may be able to extract from Trump "without getting much in return, if anything at all."

Kim may have deceived this administration, she said, "but Putin has shown himself to be absolutely untrustworthy as a partner, potentially more so than Kim."

Experts expect Trump to continue pressing NATO allies toward more burden-sharing, in line with a 2024 goal for members to contribute two per cent of their GDP on defence. 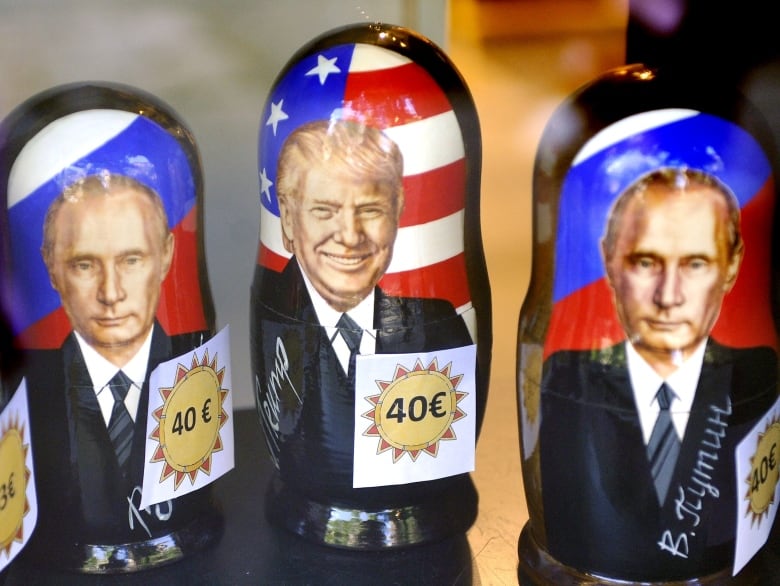 Russian matryoshka dolls depicting Putin and Trump are on sale in the Ruslania bookstore in Helsinki Monday. (REUTERS)

In 2014, only four partners were meeting those targets. Trump wants more. His lobbying may have succeeded in that regard: eight countries now meet the spending targets.

"That's already a positive move," said Elena Sokova, a nonproliferation expert at the Middlebury Institute of International Studies at Monterey, in California. "Because no matter how you slice and dice it, there's a need for countries to be stepping up their spending for allocations for the military budgets."

Despite the president's rhetoric, his administration has arguably reinvigorated NATO, hiking spending on European defence by approving $ 6.3 billion.

A more fortified NATO is bad news for Putin, though he's at least scored a win by securing a meeting with Trump.

The president, for his part, said he is "looking forward" to the meeting in Finland, though one of his tweets on Monday raised eyebrows about just how willing he'll be to take the Russian leader to task.

Following reports that Kim had not honoured what Trump termed a denuclearization "contract," Trump wrote that he remained confident the North Korean would stay true to his word, based on "our handshake."

I have confidence that Kim Jong Un will honor the contract we signed &amp;, even more importantly, our handshake. We agreed to the denuclearization of North Korea. China, on the other hand, may be exerting negative pressure on a deal because of our posture on Chinese Trade-Hope Not!

That reminded Sokova of Trump's rationale for doubting the Russians meddled in the 2016 U.S. election. Trump said he was certain because Putin told him so.

"You could say that's the equivalent of a handshake," Sokova said.