Britain's besieged Prime Minister Theresa May warned Sunday that a leadership change wouldn't make Brexit negotiations easier, as opponents in her Conservative Party threaten to unseat her and the former Brexit secretary suggested she failed to stand up to bullying from European Union officials.

As furious Conservative rebels try to gather the numbers to trigger a no-confidence vote, May insisted she hadn't considered quitting.

"A change of leadership at this point isn't going to make the negotiations any easier and it isn't going to change the parliamentary arithmetic," she told Sky News in an interview.

May added that the next seven days "are going to be critical" for successful Brexit talks, and that she will be travelling to Brussels to meet with EU leaders before an emergency European Council summit on Nov. 25.

An announcement this week that Britain has struck a draft divorce agreement with the EU triggered a political crisis in Britain, with the deal roundly savaged by both the opposition and large chunks of May's own Conservatives.

Two cabinet ministers and several junior government members quit, and more than 20 lawmakers have submitted letters of no confidence in May. Forty-eight such letters are needed for a leadership challenge vote.

Asked about the attacks directed at her, May said: "It doesn't distract me. Politics is a tough business and I've been in it for a long time."

Dominic Raab, who quit Thursday as Brexit secretary, said "there is one thing missing and that is political will and resolve." 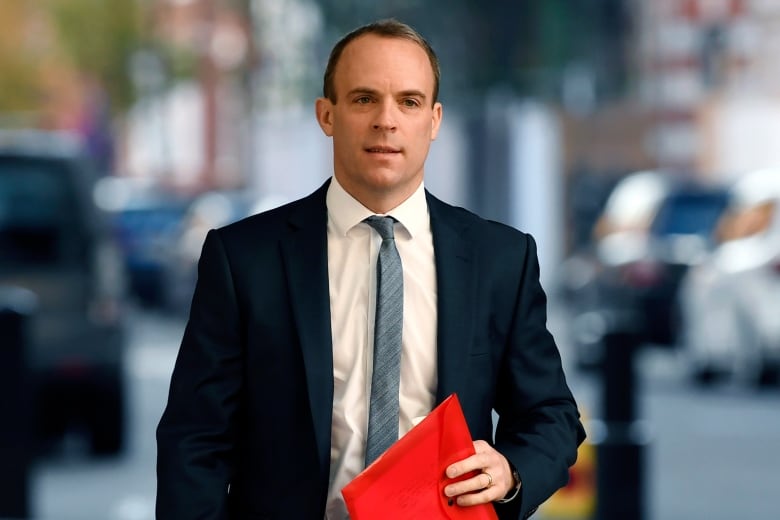 Dominic Raab stepped down as Brexit secretary last Thursday, suggesting that Prime Minister Theresa May has caved in to EU bullying. (Will Oliver/EPA-EFE)

"If we cannot close this deal on reasonable terms, we need to be very honest with the country that we will not be bribed and blackmailed or bullied and we will walk away," he told the Sunday Times.

Many pro-Brexit Conservatives want a clean break with the EU and argue that the close trade ties between the U.K. and the EU called for in the deal would leave Britain a vassal state, with no way to independently disentangle itself from the bloc.

The draft agreement envisions Britain leaving the EU as planned on March 29, but remaining inside the bloc's single market and bound by its rules until the end of December 2020.

It also commits the two sides to the contentious "backstop" solution, which would keep the U.K. in a customs arrangement with the EU as a guarantee that the Irish border remained free of customs checkpoints.

Raab said the agreement was "fatally flawed" — but that it's not too late to change that.

"I still think a deal could be done but it is very late in the day now and we need to change course," he told the BBC.